17 hours ago
Georgia DA Suggests More Subpoenas Coming, Does Not Rule Out Subpoena For Trump

A high-ranking official at the Interior Department’s Bureau of Reclamation has repeatedly shared conspiracy theories on his personal Facebook page, a review by TPM found, including posts calling the students who survived the Parkland school shooting “Nazis” and alleging the massacre was a staged false flag.

Kevin Sabo, who was originally hired for a career position in budget analysis at the DOI in 2016, was promoted to the political role of acting chief of the Office of Congressional and Legislative Affairs at the Bureau of Reclamation when the Trump administration came into power in 2017, according to federal pay scale records. In that capacity, he is tasked with working with members of Congress on public land and water policy. The role, which has historically been filled by political appointees, is listed as vacant on the bureau’s website because the White House has yet to officially nominate someone. The DOI confirmed to TPM that Sabo has been acting as the official liaison to Capitol Hill, and his LinkedIn page lists the acting chief title.

TPM’s review of Sabo’s public Facebook page — which lists his Interior Department title — found multiple posts about the students who survived the Parkland school shooting. “The Nazis took everyone’s guns away too,” he wrote on March 24. “A lot of similarities with these kids.” Earlier, on Feb. 25, he shared a lengthy, convoluted post asserting that the mass shooting was a false flag conspiracy involving the county sheriff, Rep. Debbie Wasserman Shultz (D-FL), the FBI, and the CIA’s “Project MKUltra mind control techniques.”

“Did any students die by friendly fire? Was Cruz a lone gunman or not a gunman at all?” read the post, which also includes references to the Pizzagate and QAnon conspiracies. 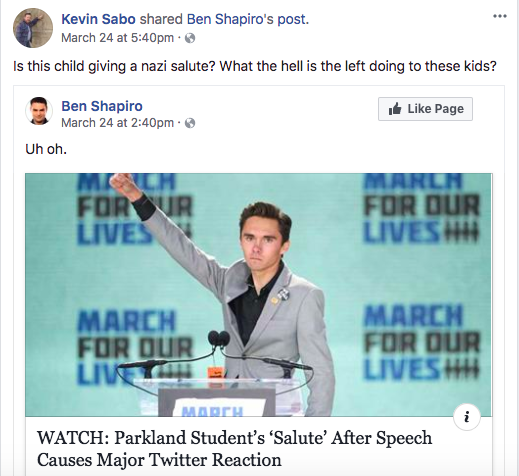 Both leading up to and since Trump’s election, Sabo frequently shared posts from right-wing sources, including articles defending President Trump’s comments about “shithole countries” and calling President Obama an “anti-Semite.” On Inauguration Day, he wrote of the protesters: “The kids are being paid by the Democrats to riot. In this administration, it’s the only work they can get.” When a driver plowed into a crowd in New York City last October, killing several people, Sabo wrote: “I’m willing to bet it was not those pesky Lutherans again!”

Sabo did not respond to TPM’s questions about the posts. The Bureau of Reclamation’s public affairs office said Friday that the agency has “no comment on the personal views expressed on his Facebook page.”

“Civil servants are guaranteed First Amendment rights to communicate their own views on their own time on their own social media sites, even if some would find those views disagreeable or the primary sources erroneous,” said public affairs chief Dan DuBray.

In the late 1990s, Sabo was a senior staff member on the House of Representatives’ Committee on Government Reform and Oversight. He then worked as general counsel on the Senate Commerce Committee, ran unsuccessfully for a House seat in northern Virginia in 1992, and served as the chairman of 11th District Republican Committee.

But his career took a downturn in 2000, when he was convicted of “attempted malicious wounding” for cutting the brakes on his ex-girlfriend’s car, causing her to crash. He was sentenced to 18 months in prison. Because of the felony, Sabo was disbarred in DC in 2003. He petitioned to be readmitted to the bar in DC in 2011 and was denied — in part because he pleaded guilty to another criminal charge in 2009 that involved taking items from a Home Depot without paying for them and attempting to return them. The charge was “larceny by false pretenses,” and was dismissed after Sabo paid a fine and completed community service hours.

The District of Columbia Court of Appeals overruled the Bar and reinstated him in 2012. “We are persuaded by Mr. Sabo’s testimony that he is a changed man,” the judges wrote, in a split 2-1 decision.

Sabo is one of several Trump administration officials found to be sharing controversial and conspiratorial content on social media. A Defense Department official resigned in April after CNN discovered his social media posts promoting birtherism and claiming President Obama was the Antichrist. Officials and nominees for posts at the Interior Department, the Corporation for National and Community Service, and the State Department have also been revealed to be posting conspiracy theories on Facebook and Twitter. A senior Health and Human Services official was placed on administrative leave in February after reporters found Facebook posts claiming Gold Star father Khizr Khan is a “Muslim Brotherhood agent” and comparing the Black Lives Matter movement to Nazis. The official was reinstated in March.