The sweeping proposal released Wednesday by Rep. Dave Camp (R-MI), the House’s top tax writer, eliminates the deduction for state and local taxes, which lets taxpayers who itemize deductions subtract general state and local taxes when calculating their federal taxable income. It’s currently the seventh most expensive tax break in code, costing the federal government about $1.1 trillion in revenue over a decade, according to the Congressional Budget Office.

Camp’s plan wipes out this break for individuals in tax years beginning after December 31, 2014. “The provision would eliminate a tax benefit that effectively subsidizes higher State and local taxes and increased spending at the State and local level,” reads a summary of the House Ways & Means Committee chairman’s proposal. It pairs the elimination of the tax break with an increase in the standard deduction, which somewhat cushions the financial blow.

The two states that benefit most from the tax break are high-income, high-tax California (whose residents use up 17.2 percent of the cost of the deduction) and New York (13.3 percent). The contrast with low-tax, red states is stark: New Jersey, despite having a third of the population of Texas, eats up more of the deduction than the Lone Star State. It’s a flashpoint in the broader red-versus-blue culture war, one that scrambles the traditional tax divide by pitting liberal lawmakers, who support the state and local tax break, against conservative lawmakers, who want to get rid of it.

New York’s Chuck Schumer, the No. 3 Democratic senator, waited barely a few minutes before declaring Camp’s plan a nonstarter because of the provision. “Any proposal that eliminates the deduction for state and local taxes, as the Republican plan would do, is dead on arrival,” he said in a statement.

A senior Republican aide responded wryly, “Those criticizing the elimination of the state and local deduction are only admitting their own taxes are too high.”

The fact that the state and local tax deduction mostly accrues to high-tax liberal states is one key reason why even staunchly anti-tax conservatives have called for axing it. The Washington Examiner’s Philip Klein labeled it “[t]he one deduction worth breaking the anti-tax pledge over,” arguing that it’s unfair because “Americans who choose live in low-tax states have to effectively subsidize those who choose to live in high-tax states.” The Heritage Foundation has also called for scrapping it because, “If tax reform eliminated the deduction, state and local governments would face stronger pressure to keep their taxes low.” Camp has been laying the groundwork for months to unwind the tax break.

With or without the state and local deduction, tax reform is extremely unlikely to pass in 2014, as aides and lawmakers broadly acknowledge. But the proposal most clearly establishes the GOP’s position on the issue and sparks off an important debate that’ll infuse future efforts to reform the tax code, which lawmakers across the ideological spectrum want to do.

“Conservatives have long had special enmity for this deduction,” wrote Bruce Bartlett, a former policy aide to Presidents Ronald Reagan and George H. W. Bush who has been critical of the GOP’s rightward shift.

Notably, it’s not usually low-income people who use the state and local tax break, it’s mostly middle-to-high income residents. The deduction is utilized by the roughly one-in-three taxpayers who itemize (most use the so-called standard deduction), and tend to be in the upper end of the income distribution. So the tax deduction is a mixed bag: regressive to the extent that higher earners benefit more from it, but progressive in that it gives states an incentive to impose a more progressive tax code.

“Effectively it’s the federal government subsidizing state and local governments,” said Roberton Williams, a senior fellow at the nonpartisan Tax Policy Center. “It’s particularly of value to high income taxpayers for whom deductions are worth more. They’re more likely to itemize in the first place, and when they do itemize, the amount they itemize is larger.”

The Joint Committee on Taxation charts out how the tax break was distributed in 2010. While one in two beneficiaries make under $100,000 per year, a whopping 50 percent of the dollar amount accrues to people making $200,000 and above, who can deduct more from their taxes. 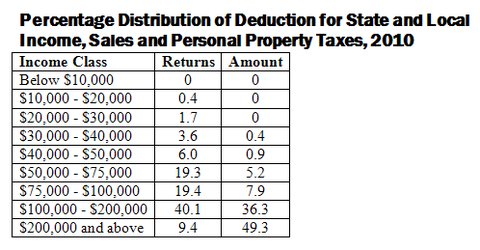 Axing the deduction “would hike taxes on a huge proportion of New York residents, as well as many others in other states,” said a Democratic leadership aide. “Not so much progressive v. conservative, [there’s] just not a lot of support in places of the country where this is a tax hike.”