14 hours ago
It’s A Mystery What The FBI Wanted At Mar-a-Lago, But Trump Knows

This week, Arkansas becomes the first state in the nation, and in the nation’s history, to require its non-disabled adult Medicaid expansion population to work or volunteer 80 hours a month to maintain their health care benefits.

Starting Tuesday, Arkansans on Medicaid have to prove that they’ve worked 80 hours over the previous month or that they qualify for an exemption. If they fail to do so, they’ll be booted from the rolls after three months. Health care advocates in the state say they expect thousands of low-income people to lose coverage — both those who can’t find work and those who can’t navigate the state’s online-only system for documenting their hours. Health groups are also sounding the alarm about the paltry funding Arkansas has reserved for implementing the program — a tiny fraction of what other states are spending to put Medicaid work requirements in place.

Arkansas’ Medicaid work requirements rule is the third approved by the Trump administration but the first to go into effect, and it has the harshest penalty for non-compliance out of any state so far. It’s akin to a three-strikes-and-you’re-out policy, in which enrollees who fail to document their 80 hours per month of work three times during the year will lose coverage and can’t apply again until the following year.

Arkansas also attempted through the waiver to partially roll back its Medicaid expansion, cutting about 60,000 people from the rolls whose incomes were slightly over the federal poverty line. The Trump administration did not grant that piece of the proposal.

For the rest of 2018, enrollees under 30 years old will be exempt from the work requirement, but that will end in 2019, and all enrollees between ages 18 and 50 will be subject to the requirement.

One widely criticized aspect of Arkansas’ new rules is that everyone enrolled in Medicaid has to document their work hours through an online portal created by the state — with no option to submit information in person, over the by phone, or by mail.

According to the Census Bureau, Arkansas has the second-lowest rate of home internet access in the nation, only slightly above Mississippi.

“It’s a very big concern,” Greg Leding, a Democratic state representative in the Fayetteville area, told TPM. “It’s natural and a good idea to do as many things as we can online, in terms of government efficiency and because that’s where we’re headed in the world. But very large swaths of the state in rural areas don’t have access, so are people going to be able to do what they need to do to get online and keep their Medicaid benefits?”

Pressed on this concern by local reporters, the director of the state’s Department of Health Services Cindy Gillespie said that by requiring low-income Arkansas to submit their information online, the state is in fact helping them improve their technological skills.

“Having that little bit of computer or phone literacy is important if you are going to be able to be moving up the income ladder,” she said. “I mean, a 19- to 29-year-old who in this day and age can’t do that and is able-bodied? You know, they need — we need to help them learn to do that. We need to help them get an email and learn how to deal in that world, or they will never be successful.”

She added that the web-only platform was cheaper and more convenient for the state, saying: “If you implement it in the old-fashioned way of ‘Come into our county office,’ we would have to hire so many people — and that just doesn’t make sense.”

A study by the Urban Institute and the Robert Wood Johnson Foundation released in May estimates that by next year as many as 39,000 people could lose Medicaid coverage under Arkansas’ new rules — 15 percent of all enrollees. More than 30 percent of that group, the study found, do not have internet access, and at least 8 percent have no access to a vehicle, making it difficult to both find work and submit information online to the state. Many of those likely to be affected also have less than a high school education or a serious health limitation that doesn’t qualify as a disability. 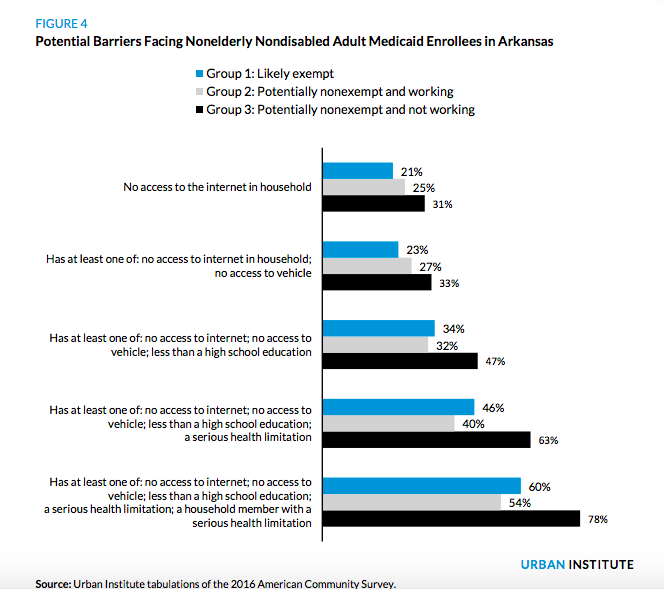 Critics of the new rules also say state residents who depend on seasonal work could be harmed by the strict monthly requirement of 80 hours, which doesn’t take into account fluctuations throughout the year.

“Agriculture is our largest state industry and there’s a lot of seasonality there,” Leding said. “And in places where it’s more urban, retail work picks up around the holidays and tapers off in other months. Somebody might be a model employee, but if their job goes away, they’ve lost their health care.”

Advocacy groups are also concerned that the state has budgeted just over $1 million in new funding to implement the work requirement, money that will be used to send notices to hundreds of thousands of people in the state and help them navigate the new rules. In comparison, nearby Kentucky is spending nearly $190 million to implement its Medicaid work requirement.

Leding told TPM that the penny-pinching is a result of the Republican majority’s zeal for slashing the state budget over the past several years.

“We’re in a political climate where we’ve already cut taxes by tens of millions of dollars and they want to pass another tax cut next year,” he said. “Anytime that’s on the horizon, they’re looking to spend less anywhere else they can.”

Under former, Democratic Gov. Mike Beebe, Arkansas was one of very few states in the South to embrace Medicaid expansion under the Affordable Care Act, extending subsidized coverage to 280,000 additional people beginning in 2013.

“Medicaid expansion in Arkansas has been an unqualified success,” Leding said. “Look at how many people were able to gain access to health care. Look at how we’ve drastically reduce our uninsured rate.”

But the once solidly-blue state swung far to the right under the Obama administration, with Republicans gaining seats in both chambers of the state legislature in 2014. Then, in 2015, Arkansans elected Republican Gov. Asa Hutchinson, who came into office vowing to overhaul the state’s Medicaid expansion. Over the next two years, he and the Republican-controlled legislature implemented a number of changes, including the creation of a private option for health insurance and charging premiums to people above the federal poverty level. But that overhaul kicked into high gear under the Trump administration, who for the first time in the 50-plus year history of Medicaid gave a green light to work requirements and other controversial restrictions on enrollment.

“The rhetoric in the state capitol has been: ‘We don’t want people just living off the government,'” Leding told TPM. “Lawmakers want to chip away at the program to strengthen their conservative credentials. But just because something is politically popular doesn’t mean it will work. And studies suggest that these requirements don’t help put people on a firmer foundation with a better job.”

Though Medicaid has never had a work requirement in the program’s 50-plus year history, other federal benefits programs that have implemented work requirements found that it failed to increase employment.

“Work requirements are a political move that do nothing to address the very real challenge that many Arkansans face – a lack of meaningful employment opportunities that offer a livable wage and benefits,” wrote Arkansas Advocates for Children and Families (AACF), one of the local organizations vocally opposed to the new rules. Even for the majority of enrollees who are working, the group said, “complicated reporting requirements will undoubtedly lead to many people falling through the cracks and losing coverage.”