The Senate returns today from a week-long recess—during which GOP lawmakers largely avoided their constituents—and will pick up where they left off in hammering out an agreement on their bill to repeal the Affordable Care Act.

Deep ideological, policy and political divides still remain among the Republican majority, exacerbated by a growing body of evidence that the bill would cause tens of millions of people to lose their health insurance over the next decade, raise out-of-pocket costs for millions more, and restrict access to crucial services.

Here are 9 charts that lay out the severe impacts of the Senate’s health care bill’s provisions.

1. The short-term cuts to Medicaid are painful.

Most of the savings in the Senate health care bill come from deep cuts to Medicaid, to the tune of more than $770 billion over 10 years, a reduction of more than a quarter of the program’s budget. The Congressional Budget Office estimates that these cuts will cause 15 million fewer people to be enrolled in Medicaid than if Congress left Obamacare in place. 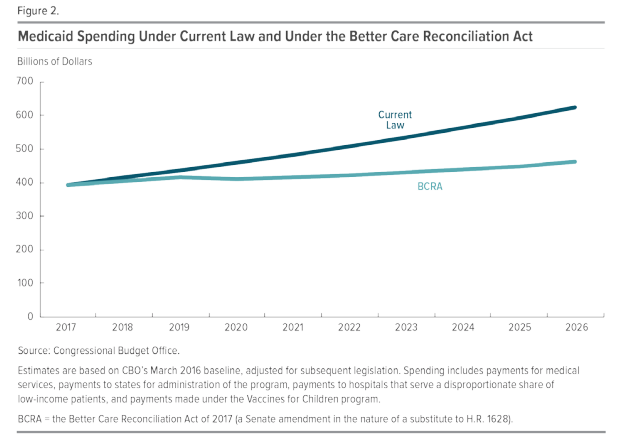 2. The long-term cuts to Medicaid are far worse.

An analysis by the health care consulting firm Avalere Health found that these cuts would have an even more devastating impact over the long term. The bill imposes a much slower inflation rate for Medicaid spending starting in 2025, drastically reducing spending for those who depend on it the most. By 2036, federal Medicaid spending on children would be slashed by nearly a third compared to current law, and spending for disabled and elderly people would be cut by about a quarter. 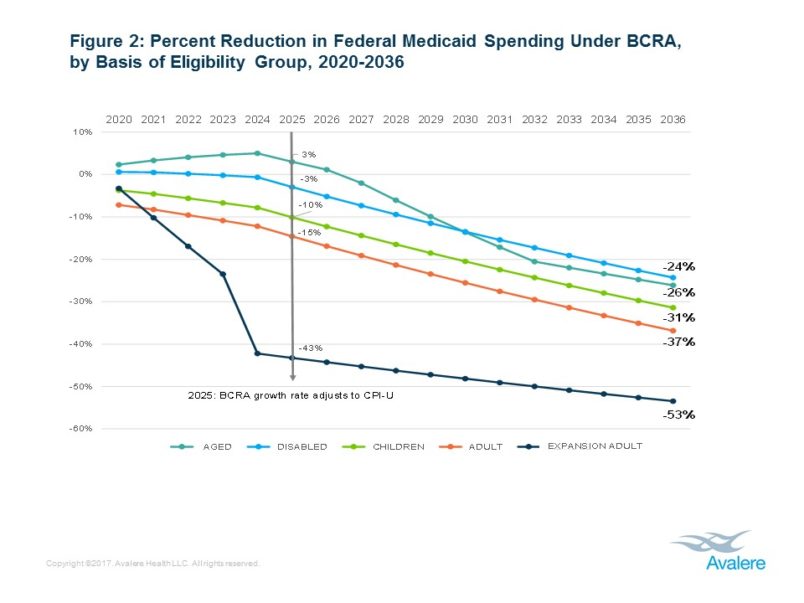 3. The uninsured population would rise in every age group …

The Congressional Budget Office’s brutal assessment of the Senate health care bill found that 22 million fewer people would be insured over the next 10 years if the bill becomes law—just under the 23 million who would lose insurance under the version passed by the House. The coverage losses would span every pre-Medicare age group. 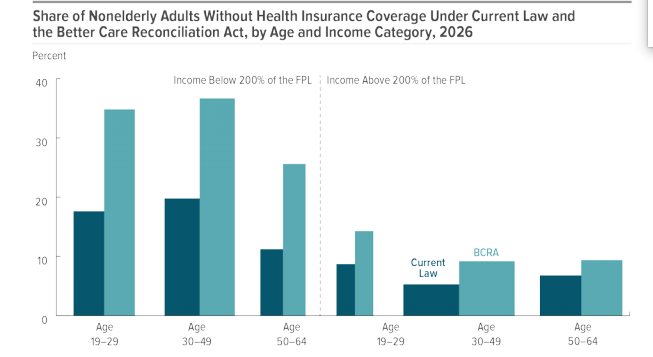 A newly published study by the Urban Institute found that the Senate’s Better Care Reconciliation Act (BCRA) would drive up the uninsured rate in every U.S. state—in some by more than 300 percent. 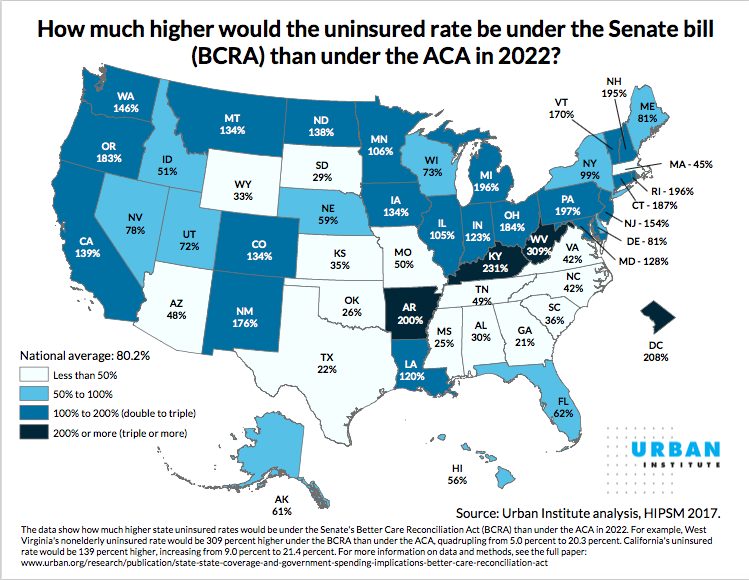 5. Premiums would jump, especially for the older and poorer.

An analysis of the Senate’s bill by the progressive think tank Center for Budget and Policy Priorities found that health insurance premiums would increase by several thousand dollars a year, hitting older Americans particularly hard. 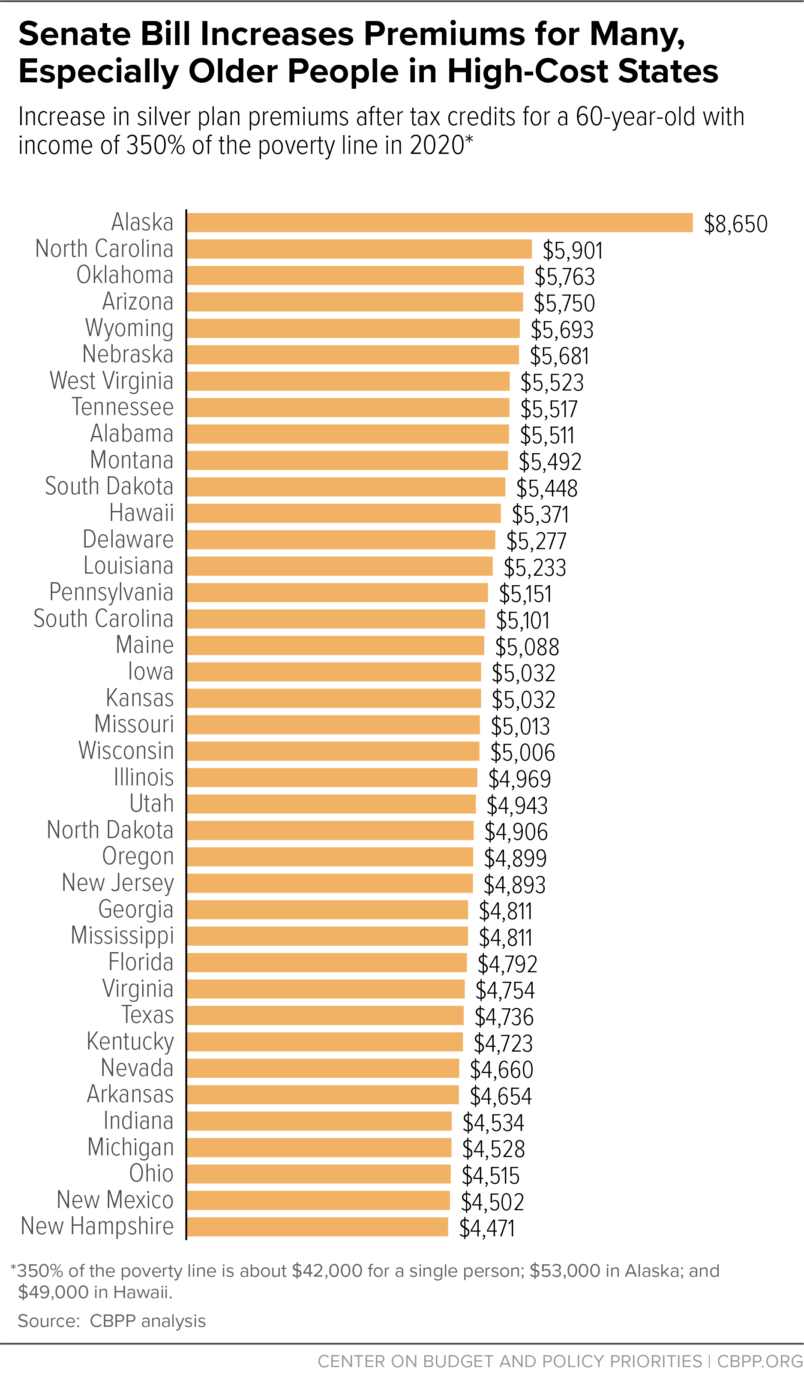 6. Tax credits for the middle class would plummet.

As premiums, deductibles, and other out-of-pocket health insurance costs would rise under the Senate GOP bill, the tax credits available to people in the individual market to help them afford their plans would shrink significantly, according to the Center for Budget and Policy Priorities.

7. Employer plans are not safe either.

Nearly half of the U.S. population, more than 150 million people, get their insurance through their workplace. While the GOP health care bill’s cuts to Medicaid and individual market subsidies have drawn the most attention and protest, the legislation would also bring back annual and lifetime limits in employer plans, end the penalty for companies that don’t provide health insurance to their workers, and allow employers to shift much of the cost of copays, deductibles and coinsurance onto their workers. The Center for American Progress calculated how many people in each state would experience these new restrictions.

8. Hospitals would bear a heavy burden

Hospital groups have come out in strong opposition to the Senate GOP health care bill, asking lawmakers to not just amend it but “go back to the drawing board.” An analysis of the bill by the Commonwealth Fund provides some insight into why—showing that despite boosting disproportionate share hospital (DSH) payments, the bill would cause a large spike in uncompensated care for hospitals across the country.

A new report by the Commonwealth Fund and George Washington University found that the Senate bill would create a loss of 1.45 million U.S. jobs by 2026—”significantly larger job losses” than the House version would trigger. “Every state except Hawaii would have fewer jobs and a weaker economy,” the report says, noting that most of these losses would occur in the health care sector but retail, construction and other industries would be hit hard as well.