I’m not sure about the legalities of this. But it seems kind of remarkable. Federal Labor Relations Authority Chairwoman Colleen Duffy Kiko has announced that she’s decertifying the authority’s own union. In other words, she’s firing the agency’s union. END_OF_DOCUMENT_TOKEN_TO_BE_REPLACED Pruitt Under Investigation For Alleged Retaliation Against Employees
By Kate Riga | June 25, 2018 7:59 a.m. Pruitt Denies He Retaliated Against Staffer Who Questioned His Spending
By Alice Ollstein | May 16, 2018 11:37 a.m. The Next Steps In The Zinke Investigations 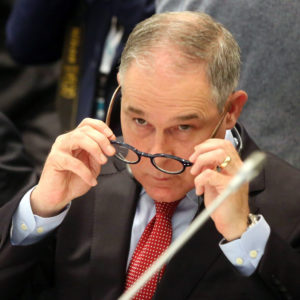 Here’s Alice Ollstein’s look at a critical issue we’re going to be closely focused on in the months and (unfortunately) years to come: the effort to purge the federal bureaucracy of experts, non-Conservative loyalists and, today, those who are not personally loyal to Donald Trump. The story has taken on a distinct coloration today under Donald Trump since his war against the ‘deep state’ is so tightly focused on protecting himself from personal prosecution. But it has decades’ old roots. And a central player is Newt Gingrich, who was at this thirty-plus years ago and now is closely advising and egging on Donald Trump to force or in many cases simply allow purges across the board. Trump isn’t an ideologue like Gingrich. But he only understands loyalism and he will do anything to protect himself from the law. So he’s a perfect partner for Gingrich’s quest to make the federal government more corrupt, ideological, ineffectual and stupid. Give this a read; and if you’re part of the federal workforce and you see things we want to hear.