Have a tip? Send it Here!
Josh Marshall is the founder and Editor-in-Chief of TPM.
@joshtpm
Detectiving Very Strongly

I was very interested to get more details on this question. The parlor game of who leaked the opinion has largely been hashed out as if it had to be one of the clerks. But that’s not necessarily the case. There are support staff who also have access to the opinions. Josh Kovensky spoke to a number of recent clerks to understand just who works at the court, who has what access and who — or rather what class of court employee — would have been in a position to leak the document.

I think you’re right on about the dynamics. To me the critical piece is where you say “codify Roe as of 2021”—so that means letting most of the post Casey laws stand. And then we’re into a problem. Some Democrats are certainly going to want something very maximal and others are going to give us the 50-point plan.

It would be nice to stick to something simple and effective. I think we’ll have an intra-party fight over this, of course. Because people want to believe it’s normal politics time and these fights are just what we need when facing an authoritarian takeover.

END_OF_DOCUMENT_TOKEN_TO_BE_REPLACED
If You’re Serious About Making Roe the Midterm Issue
By Josh Marshall | May 4, 2022 12:02 p.m. I was looking over some Senate races last night and I was reminded that it’s going to be a real challenge for Democrats to expand their Senate majority this fall. They’ll be happy just to hold it. We’re not learning anything new to recognize that Democrats face a very daunting midterm cycle. But I want to address a discussion that evolved over the course of yesterday as Democrats and Democratic officeholders reacted to the news.

Few people were more outspoken than Sen. Elizabeth Warren (D-MA) which is totally in character for her. She showed up at the protest outside the Supreme Court and she showed up on TV. She was in a fighting mood. I saw a lot of people saying, that’s what we need! And I agree. But I think there’s something else Democrats need even more: clarity.

It’s long been a truism that the precedents that would need to be toppled to overturn Roe v Wade would put in jeopardy or remove the underpinnings of rights to contraception, same sex marriage and a whole range of reproductive, erotic and matrimonial autonomy and freedom this country has long taken for granted. This is based on the jurisprudence of a “right to privacy” which is the basis of numerous court decisions going back to the 1960s. In a way it is antiseptic and structural. To do away with Roe you need to do away with the right of privacy and doing away with the right of privacy means a whole raft of other decisions fall. But reading Alito’s decision he didn’t want to leave it to that. He dismisses the privacy jurisprudence out of hand and then focuses his argument on these rights not being “deeply rooted in this Nation’s history and tradition” or “implicit in the concept of ordered liberty.”

The White House just released this statement about Roe. Here’s the text and then a few comments from me.

END_OF_DOCUMENT_TOKEN_TO_BE_REPLACED
Yep, Making Roe The Law Is Doable in 2023 I wanted to do some initial scoping out of the implications of the overturning of Roe for federal politics — both the impact on elections and the chances of passing federal laws to codify Roe.

The first thing is that people will tell you that there’s no practical way a federal abortion rights bill can get passed. That is definitely wrong. Whether or not such a law happens is entirely up to the results of the 2022 midterms. And it doesn’t require heroic assumptions.

END_OF_DOCUMENT_TOKEN_TO_BE_REPLACED
Post-Roe at the State Level 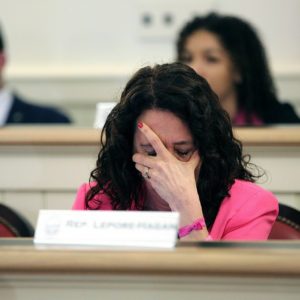 In the flurry of reactions to the apparent/reported overturning of Roe last night, I saw a campaigns analyst comment that the odds of the Virginia GOP scoring a trifecta (unified control of state government) in 2023 had fallen dramatically. The Democratic Governor of Pennsylvania, I’m sure along with others I haven’t seen yet, put out a statement essentially saying ‘no need to worry about abortion rights in Pennsylvania as long as I’m here’.

POINT: CNN is now reporting that Justice Roberts planned to dissent from Alito’s majority opinion. He was willing to affirm the 15 week Mississippi law but not overturn Roe in its entirety. That sounds fairly Roberts-like in a way, though it’s notable to me that a Chief Justice would want to be on the dissenting side of perhaps the most historic decision of his tenure when he must have at most equivocal feelings about overturning Roe. In any case, the rapidity with which Roberts’ apparent decision was reported out makes me wonder whether the breakdown in secrecy with this case doesn’t go beyond the leak of Alito’s draft majority decision. Don’t know precisely what this would mean. But keep that in mind. That’s real fast.

Politico just published what it says is an early draft of a majority opinion in which the Court formally overrules Roe v Wade. The reporting suggests that all the Republican-appointed Justices other than Roberts are supporting the opinion and the decision. Alito is the author of the opinion. It’s not clear whether Roberts may support the decision, will write a concurring opinion or won’t support the decision at all. It’s sobering, shocking to see the words, “We hold that Roe and Casey must be overruled,” which the opinion reportedly contains. And yet, really it’s not surprising at all. This has been an open secret for months. Indeed it was inevitable the moment Amy Coney Barrett joined the Court. Still, seeing it … In a different way what’s more surprising is that a draft opinion leaked. As far as I know that’s totally unprecedented. Certainly I don’t think it’s ever happened in a high profile case. And here we are.

END_OF_DOCUMENT_TOKEN_TO_BE_REPLACED
Of Course It’s On Him

In response to a reading recommendation over the weekend I heard from a number of readers who said something along these lines: we’re not the ones escalating. Putin and Russia began this, did all the escalating. Many of these responses came down to this: Putin and Russia are completely in the wrong here. All the escalation is coming from one side.