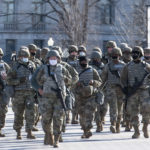 The fundraising effort, which comes at a time that most losing campaigns begin to wind down their fundraising calls, has been buoyed by false claims about election fraud. Those efforts have shattered records set during the campaign people with knowledge of the contributions told the Post.

The piling political donations, coming primarily from small-dollar donors, is among the top reasons Trump is enticed to carry on about election fraud, taking time in court to promote long debunked conspiracies about a stolen election.

In spite of fronting that the money will be used for a legal war on election fraud, a  majority of the cash raised since the election is likely to go into an account for the President to use on political activities after he leaves office, the Post said.

“Trump is making hay while the sun is shining. He’s taking advantage of all the free media coverage to pay off his campaign debt and fill his coffers for whatever comes next,” Dan Eberhart, a Republican donor told the Post.

Recent reports have also suggested that Trump is considering a 2024 presidential run and has considered ways to disrupt the incoming Biden presidency, including an event during President-elect Joe Biden’s inauguration week in January.

The deluge of donations, comes as the Trump campaign has waged a fundraising blitz, sending about 500 donation pleas since the election according to the Post’s count, and often making wild claims about voter fraud which has resonated with Trump loyalists.

The far-reaching propaganda push to sow doubt about election integrity, have even dampened efforts to energize voters in Georgia amid upcoming Senate runoff elections in the state that will determine which party holds Senate majority.

After the election, the Trump Make America Great Again Committee  began sharing its funds with Save America, a new leadership PAC that Trump set up in early November.

The leadership PAC’s loose regulations could allow for funds to personally benefit Trump after he departs the White House, the Post said, noting that an overwhelming majority of low-dollar donations under the current agreement would go toward financing Trump’s PAC, instead of efforts to support the party or to support its lawsuits on baseless voter fraud.

Zoe Richards is a TPM newswriter based in New York. Previously, she reported on local politics in Kampala, Uganda, wrote about sustainability from a think-tank in Paris, France, and has pursued documentary and broadcast news projects closer to home. She holds a master’s degree in journalism from Columbia University.
Have a tip? Send it Here!
includes:
Donald Trump
Latest News
Comments
Masthead Masthead
Founder & Editor-in-Chief:
Executive Editor:
Managing Editor:
Senior Editor:
Special Projects Editor:
Investigations Desk:
Reporters:
Newswriters:
Editor at Large:
General Counsel:
Publisher:
Head of Product:
Director of Technology:
Associate Publisher:
Front-End Developer:
Senior Designer:
SPECIAL DEAL FOR PAST TPM MEMBERS
GET 30% OFF PRIME
Rejoin and get 30% off an annual membership
Rejoin and get 30% off an annual membership