The House impeachment inquiry on Wednesday released the transcript of acting Ukraine ambassador Bill Taylor’s testimony, which was taken behind closed doors two weeks ago.

Taylor’s prepared remarks were released at the time of his testimony, though he answered questions for more than nine hours that day. In his prepared statement, Taylor described his shock at being told that the White House had held up military aid to Ukraine over President Donald Trump’s insistence that the country announce investigations into the Bidens and the alleged Ukrainian involvement in the 2016 U.S. election.

Under questioning from an impeachment inquiry staff and members of Congress, Taylor detailed how the “irregular, informal channel” of U.S. foreign policy in Ukraine — led in large part by the President’s lawyer Rudy Giuliani — often left him in the dark.

Here are some key takeaways from Taylor’s testimony:

Ukraine learned from Giuliani — via Lutsenko — that a Trump-Zelensky phone call was “unlikely.”

At a July 10 meeting with Ukraine President Zelensky’s Chief of Staff Andriy
Bohdan, Bohdan indicated to Taylor that a phone call between Trump and Zelenky was “unlikely” to happen, Taylor testified.

Bohdan and another Ukrainian official at the meeting said that message was delivered from Giuliani through Yuriy Lutsenko, Ukraine’s then-top prosecutor whom Giuliani had been in contact with since at least 2018.

Sondland’s behavior on a June 28 call gave Taylor a hint that there was a shadow foreign policy.

Taylor elaborated on a claim made in his opening remarks about E.U. Ambassador Gordon Sondland’s behavior while setting up a call between Zelensky and U.S. diplomats. Sondland told Taylor not to worry about inviting other staff to listen in on the call. (Sondland has disputed Taylor’s account of the call set up.)

Taylor testified that this is when he started to get a sense that there was an “irregular channel” of Ukraine policy in addition to the official channel. 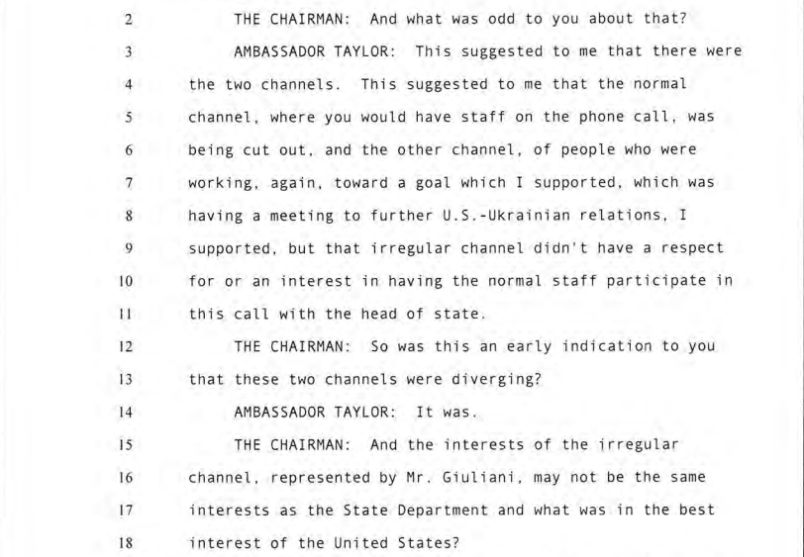 Taylor testified that he was often left in the dark about what Giuliani was up to and the policy goals he was advancing.

Taylor testified that he only learned “well after” the fact that Giuliani and a top aide to Zelensky had met.

Kurt Volker, then the U.S. special envoy to Ukraine, set up a call between Giuliani and the aide, Andrey Yermak, in July.

Afterward, Volker texted Gordon Sondland, the U.S. ambassador to the European Union, that Giuliani “is now advocating for a call” between Trump and Zelensky. He also said Giuliani and Zelensky would meet in Madrid in August.

Taylor said he was unaware of the call. “I was made aware later,” he said.

And he only learned about the Giuliani-Yermak meeting in early August “well after” the meeting took place, he testified. Later, Taylor testified that he was unaware Volker and Sondland had created a draft statement for Zelensky to read that specifically committed Zelensky to publicly announcing an investigation of Burisma — the natural gas company on whose board Joe Biden’s son Hunter sat — and the 2016 elections.

Taylor wasn’t aware of the statements until “they were released,” he said, referring to text messages between Yermak, Sondland and Volker.

“Every now and then I would see what was going on in the irregular channel,” Taylor said, “but not in this case.”

Trump’s push to purchase Greenland may have complicated plans for a meeting to urge Trump to release Ukraine aid.

Taylor was asked about a line in his opening remarks about the efforts to schedule a Trump meeting with several cabinet officials who wanted to convince Trump to release the Ukraine aid. Taylor speculated that the meeting was tough to schedule in part because Trump’s push at the time to buy Greenland was taking up “a lot of energy” within the National Security Council. Taylor testified that National Security Advisor John Bolton was against the idea of Trump getting on the phone with Zelensky because he thought it could end in “disaster.”

“He thought that there could be some talk of investigations or worse on call,” Taylor testified.

He added that he thought acting White House chief of staff Mick Mulvaney may have helped to get the call scheduled.

Zelensky had agreed to do an interview with CNN during the UN general assembly.

Taylor provided more details about the interview that Zelensky had apparently agreed to do was part of the investigation demands. Taylor said that the plan was for Zelensky to do an interview with CNN while he was in New York for the UN General Assembly in late September. Even after the aid was released, Taylor said he was still concerned the CNN interview would happened based on the “body language” when Taylor stressed to Zelensky and Yermak the importance of Ukraine not interfering with U.S. elections.

Read the transcript of Taylor’s full testimony here, or below: