13 hours ago ago
‘Holy Smokes’: Capitol Police IG Says There’s No Oversight Over The Force’s Board

13 hours ago ago
Police Release Videos, 9-1-1 Calls Around Killing Of Black Columbus Teen

The Ins And Outs of Sondland’s Impeachment Testimony

Gordon Sondland, the U.S. ambassador to the EU, told House investigators about how he first got involved in Ukraine policy, the directive he received from President Trump to “talk to Rudy” about Ukraine, and how the demands that Giuliani was seeking of Ukraine grew more “insidious” over time. Sondland spoke privately to House investigators for several hours last month.

Here are the biggest revelations from his testimony:

Trump told Sondland and others to “talk to Rudy” about the “problem” of Ukraine.

Sondland recounted a previously reporting May 23 meeting with Trump, Energy Secretary Rick Perry and others, in which Trump gave the order that they talk to his personal lawyer about their dealings in Ukraine. Sondland claimed Trump wasn’t “specific” about what they were to talk to Giuliani about.

“He just kept saying: Talk to Rudy, talk to Rudy,” Sondland said. Sondland said he didn’t know what Trump was talking about, “other than, he said: Ukraine is a problem.”

The directive came after Trump had  been “railing” about  Ukraine in the meeting, according to Sondland. Sondland claimed that after the meeting, he didn’t take it upon himself to figure out what Giualini’s concerns were. Rather, he learned from Kurt Volker, the U.S. special envoy to Ukraine, that Giuliani was concerned about “corruption,” which didn’t raise any “interesting flags” for Sondland.

Sondland says he wouldn’t have pressed Ukraine for the investigations had he known that smearing Joe Biden was the motive behind them.

Sondland claimed that, despite all the media interviews Giuliani was giving at the time, he was in the dark about Giuliani’s interest in using his Ukraine dealings to go after the Bidens. At some point, however, Sondland made the connection between Joe Biden and Burisma — the company that was at the center of the investigation demands that Sondland was delivering to Ukrainian officials. (Joe Biden’s son Hunter had been on Burisma’s board).

Pompeo and Bolton blessed his move to get more involved with Ukraine policy.

Sondland had previously told a Ukrainian news outlet that the President himself told him to get more involved in Ukraine policy. But in his deposition, he clarified that it was actually Secretary of State Mike Pompeo and then-National Security Advisor John Bolton who had sanctioned the move.

“Secretary Pompeo said continue to work on Ukraine,” Sondland testified, though he couldn’t recall exactly when Pompeo said that. He said it happened “Continually. Keep working on Ukraine.” He also said Bolton signed off on his involvement in June, after a meeting in late May where Trump had directed Sondland, Energy Secretary Rick Perry and others to talk to Rudy Giuliani. Sondland acknowledges that the Trump/Giuliani agenda in Ukraine was “improper” and possibly illegal.

Sondland confirmed that he came to believe Trump was pursuing something “improper” with his pressure campaign against Ukraine.

Specifically, the EU ambassador focused on Trump’s direction that he and others to involve Rudy Giuliani in their Ukraine work — and that Giuliani’s “agenda” may have included efforts to pressure Ukraine to investigate Joe and Hunter Biden.

In his opening statement to the committee, Sondland said he only realized “much later” that Rudy’s work “might have also included an effort to prompt the Ukrainians to investigate Vice President Biden or his son, or involve Ukrainians directly or indirectly in the President’s 2020 reelection campaign.”

Rep. Raja Krishnamoorthi (D-IL) brought up that sentence later in the deposition. 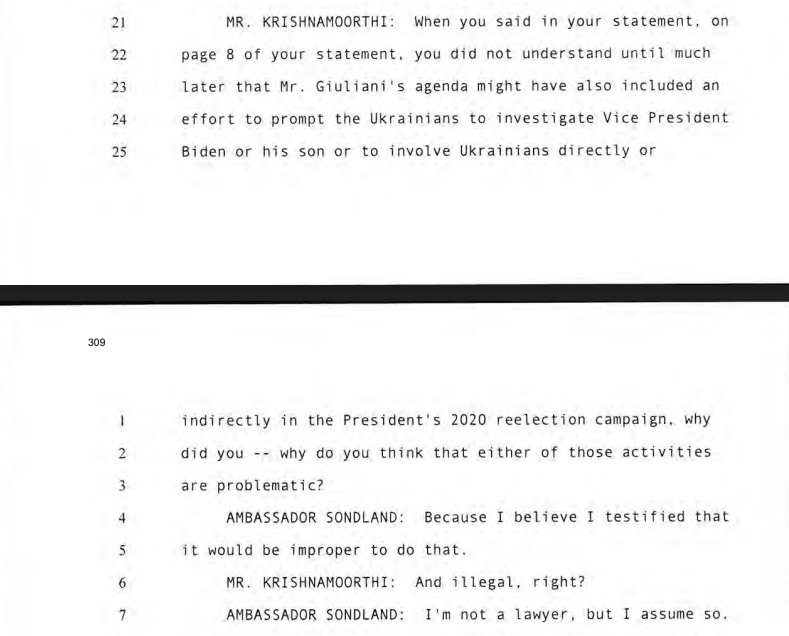 Trump brought up a 2016 conspiracy theory in the May 23 meeting.

At the fateful May 23 meeting where Trump told Sondland to talk to Rudy, the President also brought up the debunked conspiracy theory that Ukraine had colluded with Democrats in 2016 to start the Russia probe because the Ukraine was hostile to Trump. Trump would refer to the theory on his July 25 phone call with Ukraine President Volodymyr Zelensky.

Sondland did not remember any heated discussions during a July 10 visit by Ukrainians to the White House.

While several other witnesses have reportedly testified that Sondland received pushback from White House officials for how he handled a July 10 meeting with Ukrainian officials, Sondland testified that it was a “very friendly” meeting. Sondland recounted only a mild disagreement over whether and when to schedule a Trump call with Zelensky. He said he didn’t recall anyone being “dismayed” during the meeting.

According to the testimony of other witnesses, the initial meeting with the Ukrainians was cut short by Bolton because Sondland brought up the demands for Ukrainian investigations. Sondland discussed the requests against in a post-meeting debriefing with the Ukrainians, prompting National Security Council aide Alexander Vindman to tell him that the topic was inappropriate, according to Vindman’s testimony.

Sondland acknowledged the reports of a previous witness’s testimony describing the meeting going badly. Sondland admitted he called Perry after reading the reports to “refresh” his memory of the meetings. That call came the day before Sondland’s testimony.

House investigators focused in on the admission of the Perry call, which Sondland said was sanctioned by his lawyer. Perry’s recollection of the meeting aligned with Sondand’s, Sondland claimed.

Sondland could “not get a straight answer” on why the military aid was frozen.

Sondland testified that after he found out that congressionally-authorized military aid to Ukraine had been put on hold, he asked around about why and just “could not get a straight answer.”

He recalled “hearing multiple reasons why the aid was being held from various people.”

“I never heard that it was being held specifically to investigate the Bidens,” Sondland said in the October deposition.

In the recently submitted revision, however, Sondland admitted that by early September, with the “absence” of any other explanation, he came to presume that the aid freeze and the demand for an “anti-corruption” statement from Zelensky were linked. He also recalled a Sept. 1 meeting with a Zelensky advisor in which Sondland told the advisors that the aid would not come until Ukraine provided the “anti-corruption” statement.

Sondland played down Mulvaney’s involvement in the Ukraine haggling.

Asked about a text where Sondland was asked to talk to White House chief of staff Mick Mulvaney about scheduling a Zelensky meeting at the White House, Sondland said he couldn’t recall having a conversation with Mulvaney about those plans.

“All I can telI you is Mulvaney was almost impossible to get a hold of. He rarely responded to emails and almost never returned phone calls,” Sondland said. He later added that there “may” have been a conversation with Mulvany — either over the phone or when the two ran into each other in the White House halls — where he asked Mulvaney, “Why don’t we have the meeting yet? Why don’t we have the phone call?”

“And I don’t think I got a definitive answer, other than, we’re working on it,” Sondland said.

A Democratic House counsel zeroed in on the question of Sondland’s Mulvaney interactions and implied that another witness testified hearing from Sondland that Mulvaney linked the visit to the investigations. Sondland continued to insist he had no recollection of such a conversation. There was a plan for Zelensky to announce the Trump-requested probes on Tucker Carlson’s show.

Sondland was asked about a text discussing an “interview” he and the other diplomats had hoped would break the logjam in Ukraine. It was a reference to an idea that Zelensky give an interview to Fox News’ Tucker Carlson, Sondland told House investigators. The comment apparently prompted laughter in the deposition, though the GOP staff member doing the questioning made clear he was not among those laughing. 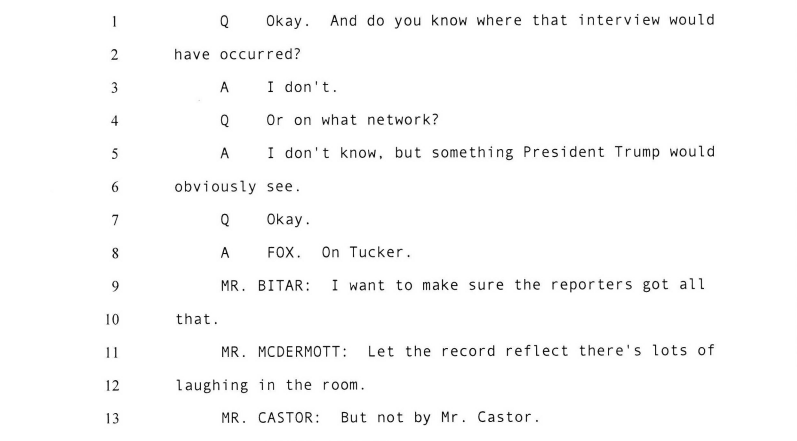 Sondland’s assurance of no Trump quid pro quo came from a Trump claim that he wanted “nothing.”

When career diplomat Bill Taylor raised to Sondland in a text his concerns about military aid being leveraged for investigations, Sondland called Trump and later claimed to Taylor that there was no quid pro quo. But rather than ask Trump specifically about the alleged quid pro quo, Sondland, according to his testimony, asked the President “one open-ended question. What do you want from Ukraine?”

“He said: I want nothing. I want no quid pro quo. I want Zelensky to do the right thing,” Sondland recalled of the Sept. 9 phone call.

Read the full testimony below: