ProPublica is a Pulitzer Prize-winning investigative newsroom. Sign up for The Big Story newsletter to receive stories like this one in your inbox.

After John Solomon ran columns in The Hill that touched off a disinformation campaign against Democratic presidential nominee Joe Biden, the publication had discussions with Rudy Giuliani about a business venture.

Less than four months after Solomon’s reporting, Giuliani and The Hill actively pursued a deal to create a podcast together, with Solomon acting as an intermediary, according to emails obtained by ProPublica. The project, which never came to fruition for unclear reasons, featured the former New York City mayor interviewing various public figures. The emails include recordings of lengthy chats with the commissioner of Major League Baseball, Rob Manfred, and a retired Marine Corps general named James T. Conway.

The Conway interview largely concerned MEK, the dissident Iranian group that the United States had designated a terrorist group until 2012. MEK has paid Giuliani at least $20,000 for appearances and lobbying on its behalf. Conway declined to comment on the interview.

Giuliani told ProPublica that the podcast grew out of discussions with The Hill’s owner, Jimmy Finkelstein, a Republican and longtime friend who served as a fundraiser for Giuliani’s failed 2008 presidential run.

“I was talking to Jimmy about a podcast that didn’t happen,” Giuliani said in an email, adding that “John Solomon was just trying to help Jimmy get it done.”

Solomon repeatedly declined to comment, saying, “I refer you to The Hill for any matters involving Hill business.”

He said he had no formal business relationship with Giuliani.

“He has never had anything to do with my personal or private business, at all. He does not now, nor will he ever,” Solomon said.

The Hill, confirming the Giuliani discussions, said it was planning to create a “podcast network with a multitude of political voices from all sides.”

Giuliani said he was “never paid” for his podcast work. “I continue to believe that your interest in this is not legitimate,” he said in emails to ProPublica. “Don’t ever try to give me bull I’ve been around too long. This is a hit job on a perfectly legitimate situation.”

Giuliani himself seems to have had a wry attitude about his close relationship with Solomon. In late June, a month before Trump urged Ukraine’s leader to investigate his top political rival, the president’s personal attorney went to a London cigar shop with Parnas and his partner Igor Fruman.

Giuliani later emailed a photo of the moment to Solomon, with a subject line that began: “Smoked Filled Room.” 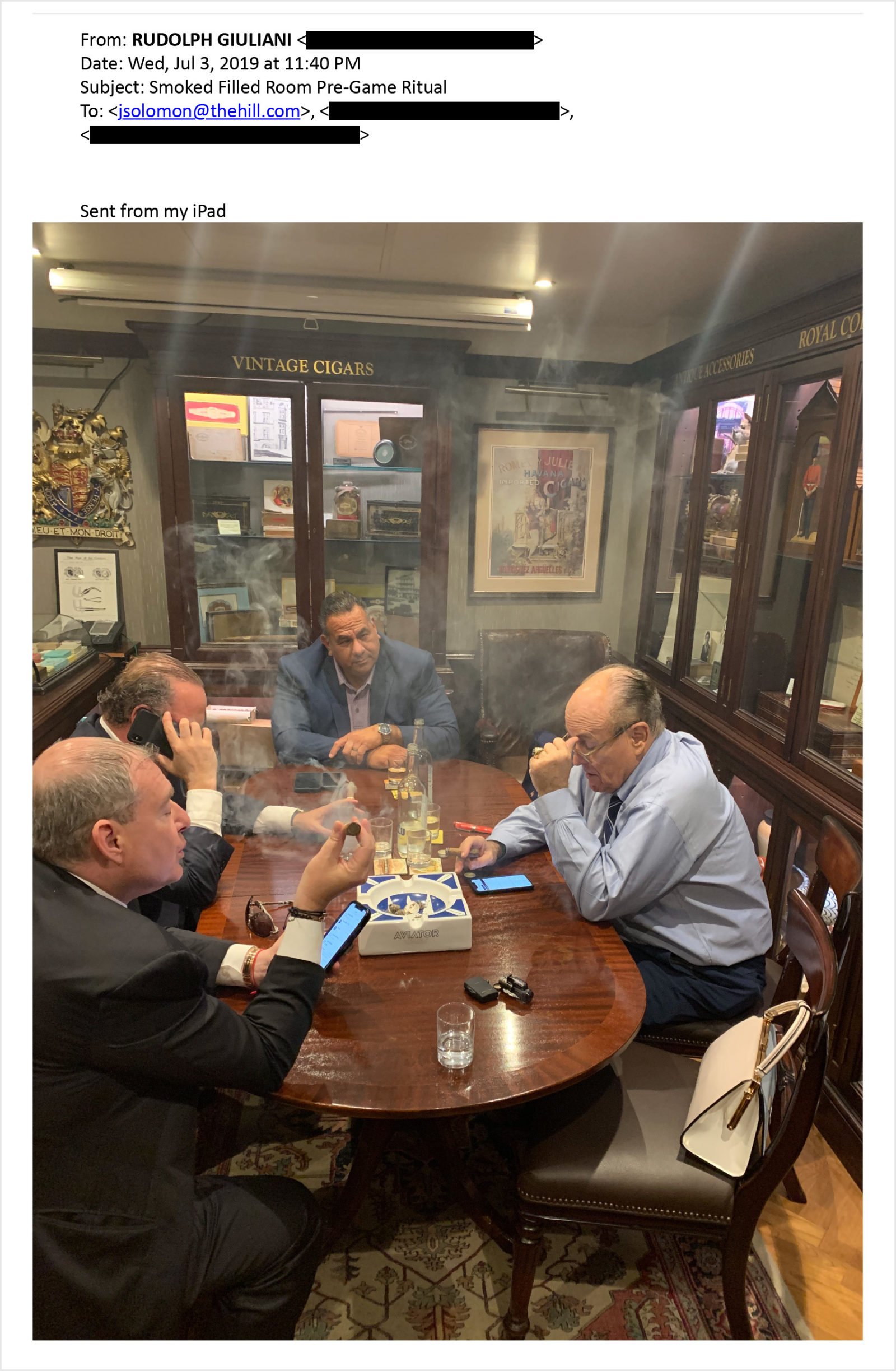 Federal prosecutors in Manhattan indicted Parnas and Fruman last month on allegations that they illegally funneled money into U.S. political campaigns. Giuliani is under investigation by the same office, according to multiple reports.

Details on Solomon’s role in the genesis of the campaign against Biden continue to emerge from the Democrats’ effort to impeach the president.

This month, the House committees carrying out the impeachment inquiry released text messages from September between Kurt Volker, Trump’s former special envoy to Ukraine, and Gordon Sondland, the ambassador to the European Union. Volker informs Sondland that Giuliani will “talk w Solomon” and that the president’s attorney had “urged” him to do the same.

Solomon told ProPublica last month that his reporting was accurate and defended his sourcing, saying, “No one knew there was anything wrong with Lev Parnas at the time.”

Internal records show The Hill’s higher-ups were concerned about Solomon’s mixing of journalism and business. At one point in 2017, the then-publisher warned in an internal memo that Solomon was engaged in “reputation killing stuff.” 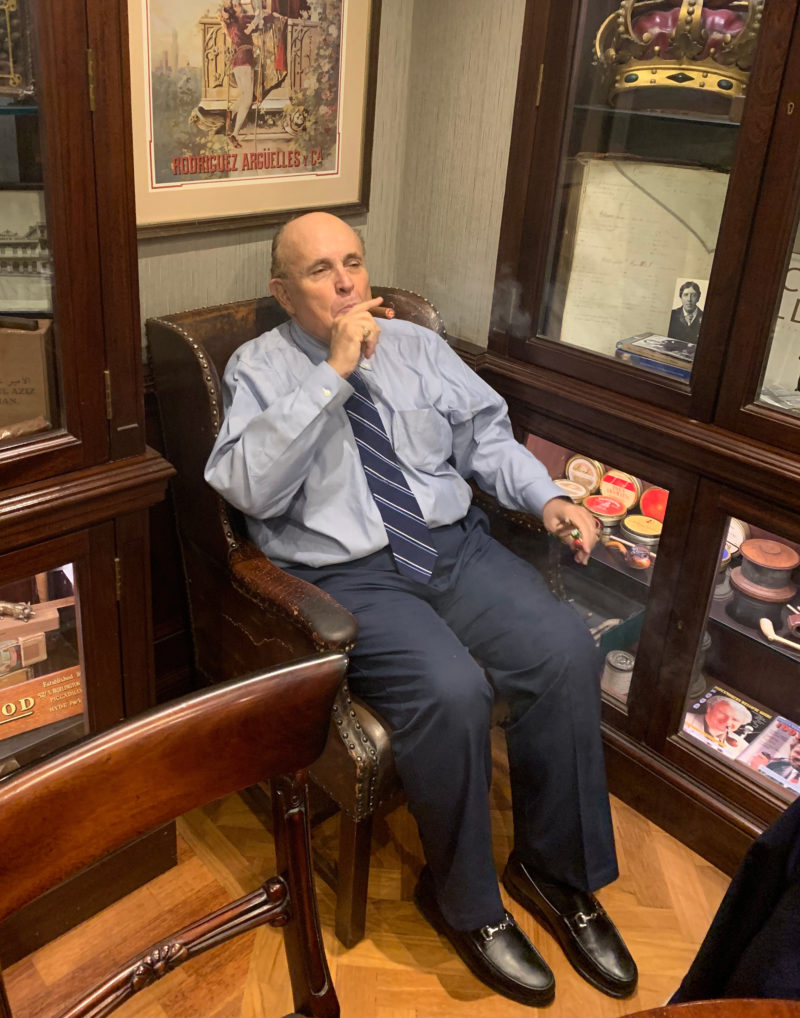 The memo alleged that Solomon brokered a branded content deal while influencing news coverage that benefited the group that paid for the content. Solomon deferred comment about those deals to the Hill.

When asked if he was compensated for arranging those deals, he repeatedly declined to answer.

While Solomon has left The Hill, he continues to publish stories about Ukraine and the Bidens on his personal blog. He is also a Fox News contributor. Giuliani, in turn, continues to use his work to advance the counternarrative that it was the former vice president, not Trump, who is mired in a scandal involving a foreign power.

On Nov. 5, for instance, Solomon published a story on his personal website that featured State Department emails that he said were evidence that the Ukrainian gas company on whose board Hunter Biden sat used its affiliation with the vice president’s son to leverage a meeting with a top State Department official to improve the firm’s image.

The next day, Giuliani posted an image on Twitter of one of the emails from Solomon’s story.