13 hours ago ago
After J&J News, Pfizer CEO Says It Can Deliver 10% More Vaccine Doses To U.S.

‘You Are Amazing’: Gaetz Turned To ‘Mentor’ Hannity During Cohen Tweet Scandal

After Rep. Matt Gaetz (R-FL) tweeted a threat to expose Michael Cohen’s alleged infidelity on the eve of the latter’s congressional hearing last March, he was facing an admonishment from House Speaker Nancy Pelosi (D-CA), an investigation by the Florida Bar and general reproach.

In his hour of need, he turned to … Sean Hannity.

“Hey @MichaelCohen212 – Do your wife & father-in-law know about your
girlfriends? Maybe tonight would be a good time for that chat. I wonder if she’ll
remain faithful when you’re in prison. She’s about to learn a lot…” Gaetz wrote in a now-deleted tweet.

As captured in the appendix of a report released Friday by an investigative subcommittee of the House Committee on Ethics, Gaetz immediately turned to Hannity after the Bar announced its investigation. 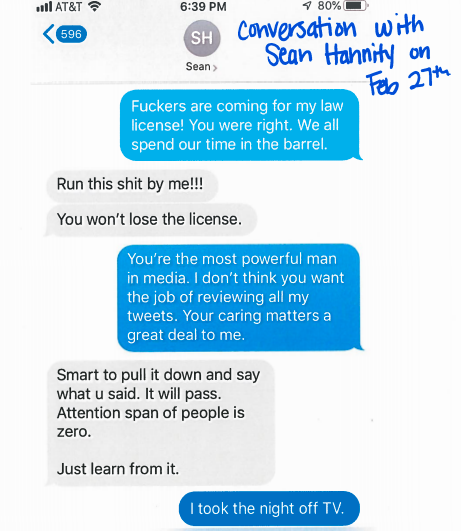 Hannity coached an obsequious Gaetz on his next moves, advising him to stay off of television for a while, but giving his blessing for Gaetz to speak at CPAC but to “be smart” there and “never get caught up with crowd.”

Hannity advises Gaetz to send a private note to Cohen and gives him contact information for both Cohen and his then-lawyer Lanny Davis — but reminds Gaetz to “send to me first!!” Gaetz follows Hannity’s advice and apologizes to Cohen, sending Cohen and Davis into a tizzy.

“What a hypocrite!” Davis exclaims in a group chat with Cohen and Gaetz after Gaetz sends his carefully-curated apology text. “Should we do anything to leak this?” Davis later apologizes for his “excessive anger.”

Davis gets into it with Gaetz again after a Washington Examiner story revealed Gaetz telling Trump he was “happy to do it for you” about posting the original Cohen tweet. Hannity isn’t the only one with whom Gaetz coordinated amid the tweet fallout.

According to screenshots attached to the report, Gaetz was texted by Michael Tokes, a far-right activist, who wanted to coordinate “influencers” in their defense of Gaetz.

“I’m testing the truthfulness of Michael Cohen,” Gaetz responded. “That should still be allowed in Congress. Let’s find out all the people Cohen lied to.”

Gaetz also couldn’t resist his moment in the limelight in another text exchange, telling the Wall Street Journal’s Alex Leary to “stay tuned” for more information about the marital infidelities he alluded to in his tweet.

Ultimately, the investigative committee found that Gaetz had acted in a manner “inconsistent” with standards set by the House, and that his actions “did not reflect credibly upon the House of Representatives.” But, it also concluded that Gaetz did not go so far as to intimidate a witness or obstruct Congress’ investigation, letting him off with an “admonishment.”

“While Representative Gaetz’s conduct did not violate the federal witness tampering and obstruction of congress [sic] laws, he risked interfering with the work of the House when he made statements that were reasonably perceived threats to a witness, the day before that witness was scheduled to testify in a congressional hearing,” the report concluded.