The House committees leading the impeachment inquiry on Monday released the testimony of the State Department official who claimed to overhear an explosive phone call between President Trump and the U.S. ambassador leading the Ukraine pressure campaign.

David Holmes, who served in the U.S. Embassy in Kyiv, said he overheard the phone call while he was at a restaurant with U.S. Ambassador to the EU Gordon Sondland. The phone call allegedly happened on July 26, the day after President Trump’s phone call with Ukraine President Volodymyr Zelensky, while Sondland was traveling in Ukraine.

Holmes testified that he overheard Trump ask Sondland about the “investigation” and that Sondland told Trump that Ukraine was going to do it. After the call, according to the testimony, Sondland told Holmes that Trump only cared about the”big things” when it came to Ukraine, such as the investigations that Rudy Giuliani was pushing.

Here’s what else was revealed:

Embassy staff was excluded as Perry pushed an “aggressive” agenda.

Holmes testified that embassy staff was excluded from the discussions of what Secretary of Energy Rick Perry and the other so-called “Three Amigos” were up to in Ukraine.

This included what Holmes called an “aggressive” agenda Perry was pushing.”We were in the loop on some things, but we suspected we were out of the loop on other things,” Holmes said.

Sondland “winced” Trump was speaking so loudly on the call, which caused security concerns for Holmes.

Holmes recalled Trump speaking so loudly on the July 26 that Sondland “winced” as he held the phone out away from his ear. That he was calling on a cell phone was also surprising to Holmes, he testified, because it is assumed that the Russians are monitoring mobile phone conversations in Ukraine. 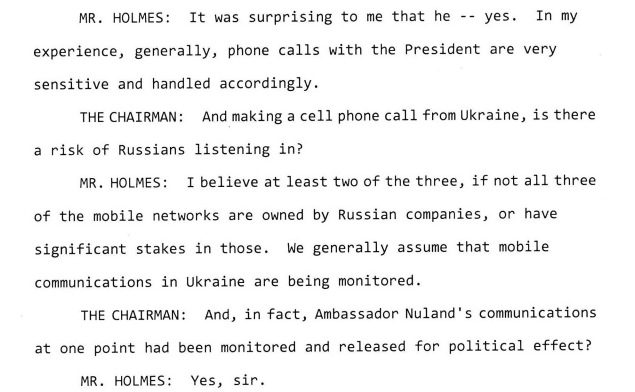 Holmes was told not to sit in on a meeting between Sondland and a top advisor to President Zelensky.

While Holmes typically sits on diplomatic meetings as a notetaker, he was told that Sondland wanted a meeting with a top Ukrainian official to be a “one-on-one.” The meeting happened the morning before Sondland’s lunchtime call with Trump,  during which Sondland allegedly told Trump he would do the investigations.

Holmes told the story of the call to “to almost anyone I encountered, because it was so remarkable.”

When he returned to the embassy, he told his supervisor about the call. That day was Holmes’ last day in the office before he went on vacation, so he felt an obligation to make sure his supervisor knew what happened. Holmes said it “it didn’t occur” to him to memorialize the Ukraine aspect of the phone conversation in notes, because it didn’t fall into a category of conversations — such as conversations with foreign officials — that are reported up through the normal channels.

Ukrainian officials believed Giuliani was a “significant person” in how they managed their U.S. relationship.

Rep. Lee Zeldin (R-NY) had a number of questions about how Holmes came to believe that Giuliani had taken a direct role in U.S. diplomacy in Ukraine. Holmes testified that that’s how Ukraine saw it, and at one point, a Ukrainian official told Holmes that “someone named Giuliani” had told the Ukrainian that he was “an adviser to the Vice President.” Holmes said that he didn’t know if the official meant Vice President Pence but that the Ukranians seemed to think that Giuliani “was a significant person in terms of managing their relationship with the United States.”

Even after the aid was released, the embassy was worried Zelensky was going to announce the investigations.

Holmes testified about the concern within the U.S. embassy, even after the military assistance was released, that Zelensky was still planning on doing a CNN interview announcing the probes. Part of that concern was the belief the hold may have been lifted because Ukraine had already committed to the CNN interview, Holmes said, adding that there was some “evidence to that effect.” Holmes received via a text from his deputy a summary of a phone call the deputy had had with an official at the U.S.’s European Union office. According to the deputy’s summary of the call, Zelensky was still supposed to do the CNN interview, Holmes testified.

“It validated our concern that we weren’t out of the woods yet on the possibility of an interview,” he said.

Read the transcript below: