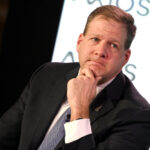 3 mins ago ago
GOP Guv Says He Turned Down Senate Bid Because GOP Sens. Admitted They Don’t Do Anything

Sen. Ron Johnson (R-WI) made good on his threat to make the Senate clerks read aloud the entire 628-page COVID-19 relief package, an endeavor which stretched from around 3:20 p.m. Thursday afternoon to just past 2:00 a.m. on Friday.

The senator said he was insisting on the exercise to show people how much of a “boondoggle” the package was, claiming that it’s bloated with unnecessary money and provisions. He and his fellow Republicans plan to draw out the expected passage of the pandemic relief bill as long as possible, Johnson telling reporters that he’s planning three sign-up shifts to make sure that an enormous number of amendments get voted on later in the process.

But first: the world’s most tedious live audiobook reading.

Johnson, often the only senator in the chamber during the marathon read, at times seemed to follow along with the bill text, paced around the empty room, sat with his hands in his lap and a legal pad on his desk. At one point around 7:00 p.m., Sen. Rick Scott (R-FL) came and relieved him for a few minutes.

Johnson, or another Republican in his stead, had to remain on the floor to object in case another senator asked to dispense with the reading.

Some senators got creative during the long hours. In social media posts, Sen. John Hickenlooper (D-CO) read pleas for help from struggling Americans to lambaste the Republicans’ delay.

Right now my Republican colleague is delaying a vote on the COVID relief bill by requiring the poor Senate clerks to read all 600+ pages out loud. That’ll take about 10 hours.

So instead, tune in as I read letters from folks who are pleading for help. https://t.co/dqUGjkY4Kq

Senate Majority Leader Chuck Schumer (D-NY) tweeted out favorite parts of the bill as they were read aloud.

The American Rescue Plan will invest in small businesses in this crisis.

Republican Senator Ron Johnson just made sure the American people heard that from the floor of the United States Senate! pic.twitter.com/gGUI7ZM6q2

As the hours ticked down, the pages finally started to dwindle.

Sen. Chris Van Hollen (D-MD) asked that the Senate convene at 9 a.m. on Friday and proceed with three hours of debate on the bill, down from the original 20. Neither Johnson, nor any other Republican, objected. Van Hollen told reporters Friday that Johnson was on the floor at the time. Sen. Tammy Baldwin (D-WI), presiding over the chamber at the time, gaveled them out, foiling Republicans’ plans for an additional 17 hours of procedural delays.

On Friday, debate on the bill will commence, followed by the vote-a-rama, where senators propose their amendments. Republicans plan to both try to peel off moderate Democrats on certain proposals — like lowering the unemployment insurance benefit to $300 a week instead of $400 — and force them into uncomfortable votes that can be cut into attack ads later. Democrats, meanwhile, will try to keep the caucus united. Sen. Bernie Sanders’ (I-VT) has said he plans to introduce a minimum wage amendment.

Unless Republicans find a way to successfully poach a lawmaker such as Sen. Joe Manchin (D-WV) on a certain proposal that could imperil the bill’s passing, most of it will be for show. Even though it only takes 51 votes to pass the amendments, Schumer can add a final amendment whenever the vote-a-rama runs out of steam to strip out all the changes and leave the underlying bill how it was before.

“First and foremost, I want to thank everyone on the floor staff who worked late into the night and into the wee hours of the morning to finish reading the Senate amendment to the American Rescue Plan,” Schumer said as he opened Friday’s proceedings. “And as for our friend from Wisconsin,” he added, “I hope he enjoyed his Thursday evening.”

Correction: The original version of this story said that Sen. Johnson had left the chamber when Sen. Van Hollen curtailed Friday’s debate time. Van Hollen said Friday that Johnson was on the floor, but did not object.