8 hours ago
With Fresh Obstructionist Demands, McConnell Dares Dems To Blow Up The Filibuster

Trump Fundraising Off Controversial Push To Include Citizenship Question In Census

President Trump’s campaign committee is fundraising off a controversial request from his Justice Department that the 2020 Census include a question about citizenship.

An email from the campaign committee poses a survey to recipients with the subject line “a truly simple question for you.”

The email then includes a survey on the question that leads to page seeking contributions to the campaign. 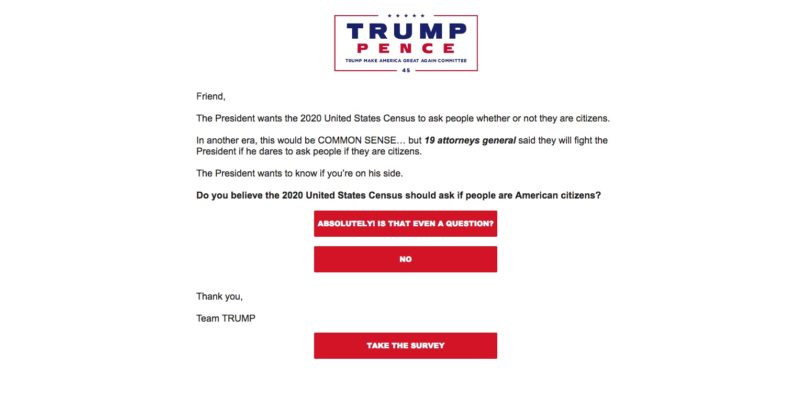 Former Census officials, policy wonks and civil rights advocates have all come out against the idea of asking about citizenship status in the decennial census. They fear that it will depress participation — especially among minority and immigrant communities. Internal Census research has shown that the question prompts fears about confidentiality and privacy among survey takers. Even citizens who live with non-citizens might be fearful about participating if the question is included, particularly given the anti-immigrant rhetoric coming out of the Trump administration, critics of the idea say.

An undercounting of urban and minority communities stands to shift political power and resources to rural and white communities.

Critics also say adding the question this late in Census planning period adds another practical complication for a Census already facing a number of logistical hurdles.

ProPublica reported recently that John Gore, a political appointee at the Justice Department who previously represented Republicans in high-profile voting rights lawsuits, was behind the request that Census Bureau consider adding the question. An aide to a former Republican senator who championed a bill to include the citizenship question has recently joined the Census as a political appointee, ProPublica also reported.

Commerce Secretary Wilbur Ross, who will have the final say over whether the question is included, is required to submit to Congress the questions Census intends to ask by the end of the month.