8 hours ago
Kushner Company Agrees To Pay At Least $3.25 Million To Settle Claims Of Shoddy Apartments And Rent Abuses

The third time was not the charm for an anti-immigrant hate site seeking to hold its first-ever conference.

The Hilton Tucson El Conquistador golf resort said it will no longer host a March 2018 “immigration conference” for VDare, a publication that routinely publishes stories bylined by white nationalists, becoming the third venue this year to back out of holding the site’s planned conference.

“The safety and security of our guests and employees is of the utmost importance,” the hotel’s management said in a statement to Media Matters, who first reported the cancellation and has closely tracked VDare’s efforts to put on the conference. “After careful consideration, the hotel has decided to terminate its contract with VDare. We will not be hosting the event previously booked at the Hilton El Conquistador for March of 2018.”

TPM’s request for comment appeared to break the news to the site’s founder, Peter Brimelow, who said in an email Friday that he and his wife, Lydia, who handles the site’s events, hadn’t gotten word of the cancellation.

Brimelow said he had notified the resort about “who we were” when making the booking and that “it’s right there on the site anyway.” He added that “nothing can surprise me about the vindictiveness of America’s emerging Totalitarian Left or the cowardice of the capitalist class.”

Though Brimelow denies that his publication espouses white nationalist ideas, the author of “Alien Nation: Common Sense About America’s Immigration Disaster” shares white nationalists’ concerns about non-whites taking over the country; routinely attends white nationalist events; and hosts articles with headlines like “One Problem With These Hispanic Immigrants Is Their Disgusting Behavior” on VDare.

The site was even described as “racist” by a Breitbart News editor in an explosive BuzzFeed exposé on Breitbart’s successful efforts to smooth out white nationalist ideas for publication on its own site.

That ideology is what keeps prompting venues to derail VDare’s efforts to bring together “all the most controversial immigration patriots in one place,” as it promised to do in a poster for the March conference that’s still featured on the banner of VDare’s website and pinned to the top of the site’s Twitter feed: 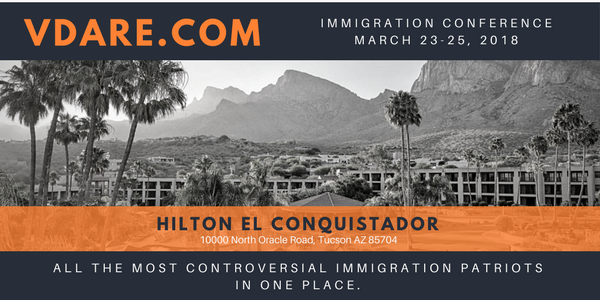 Tenaya Lodge, a resort near Yosemite National Park, denied the site’s first attempt to hold an event earlier this year after learning “of the nature of” the organization. And Cheyenne Mountain Resort in Colorado canceled VDare’s booking shortly after the fatal white nationalist rally in Charlottesville last summer, after drawing criticism from local press and politicians for agreeing to host the event.