17 hours ago
Surgeon General: COVID-19 Cases Next Week Will Be ‘Our Pearl Harbor Moment’

By Tierney Sneed
|
October 19, 2018 4:25 p.m.
EDITORS' NOTE: TPM is making our COVID-19 coverage free to all readers during this national health crisis. If you’d like to support TPM's reporters, editors and staff, the best way to do so is to become a member.

The Russian troll farm that special counsel Robert Mueller named in an indictment last February for meddling the 2016 election has continued to meddle going into the 2018 midterms, according to a new complaint unsealed Friday, including with social media posts messaged to bash Robert Mueller.

The new complaint — which was brought not by Mueller, but by in-house Justice Department prosecutors based in Virginia — is against, Elena Alekseevna Khusyaynova, who allegedly serves as the chief accountant for the social media influence campaign “Project Lakhta.” The complaint goes into new details about the entire operation, including messaging materials offered as guidance to the internet trolls as they targeted audiences of particular political viewpoints.

They used such messaging strategies, according to the complaint, when posting to social media stories like a World News Daily article titled “The 8 Dirtiest Scandals Of Robert Mueller No One Is Talking About.” 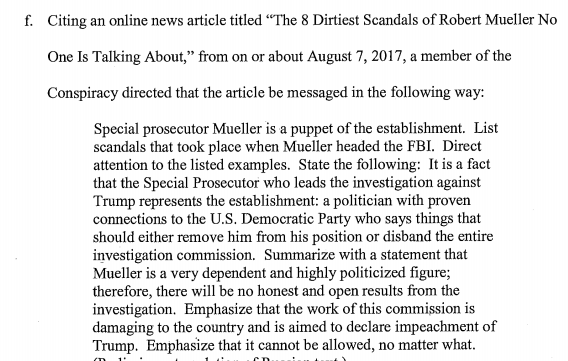 Mueller was not the only person who the trolls geared their social media messaging around, according to complaint.

The Russians wanted to brand House Speaker Paul Ryan as a “complete and absolute nobody,” a “two-faced loudmouth” who had “not accomplished anything good for America.”

When the trolls spread a Fox News story about Lou Dobbs’ criticism’ of Senate Majority Leader Mitch McConnell, they were instructed to describe McConnell as a “renegade” and a “vile liberal” who has done “nothing to fulfill Trump’s and other Republicans’ election promises.” The trolls also had messaging for disseminating stories about “fake news” CNN and other media outlets that are “the main propaganda channels that are screwing with the heads’ of American citizens.” 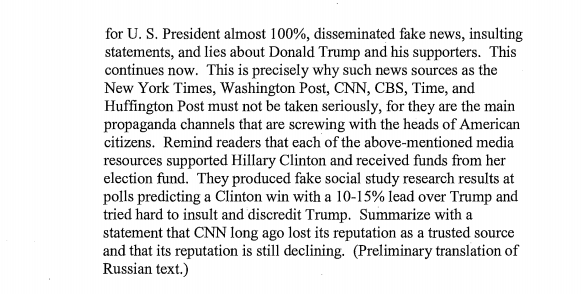 The Russian trolls were tasked to disseminate a local news story — based on shoddy data analysis of a voter fraud alarmist group — with the message that “all illegal voters must be kept away from the ballot boxes at distances ‘beyond artillery firing range.'” 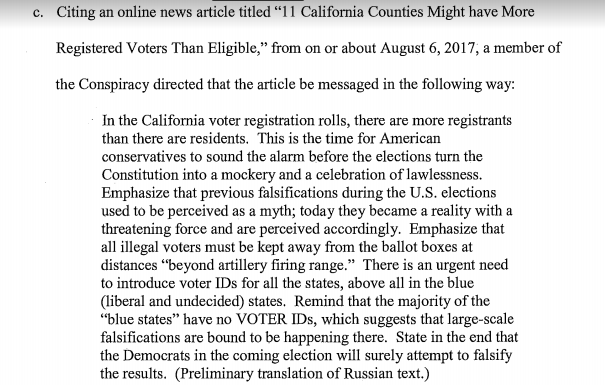 One of the memes accused former President Obama of having ties to the Muslim Brotherhood, while dismissing the concerns about President Trump’s ties to Russia. Read the full complaint below: