3 days ago ago
What The Jan. 6 Committee Wants From Its Latest Subpoena Targets

As evidence for why Simon & Schuster did not want to move forward with publication of self-proclaimed far-right “troll” Milo Yiannopoulos’ autobiography “Dangerous,” the publisher has offered up the manuscript itself—annotated with a litany of scathing notes from one of its top editors.

The draft was included in court documents the publisher recently filed in New York State Supreme Court to defend its February decision to cancel a publication deal with Yiannopoulos worth $225,000. Yiannopoulos sued for $10 million in July over a breach of contract.

Manuscript notes from editor Mitchell Ivers show the impossible task Simon & Schuster faced: prodding an individual who built a career at Breitbart News off of demeaning Islam and using the word “lesbian” as a slur to produce a book suitable for mainstream publication.

Over and over, Yiannopoulos’ characteristic self-aggrandizement, penchant for ethnic smears, sloppy logic, and lack of humor are criticized by Ivers.

“Delete irrelevant and superfluous ethnic joke,” Ivers writes of a line about “informing cab drivers that curry is not a deodorant.”

“Don’t start chapter with accusation that feminists=fat. It destroys any seriousness of purpose,” he notes on a section titled “Why Feminists Hate Me.”

“If that headline is hate speech, THIS WHOLE BOOK is hate speech,” he implores on a section about a piece by Guardian columnist Jessica Valenti titled “Feminists Don’t Hate Men, But It Wouldn’t Matter If They Did.”

The “superficial and nonsubstantive” quality of the work is what ultimately prompted Simon & Schuster to cancel the book contract, Ivers said in a sworn affidavit. The decision to do so came at around the same time that Yiannopoulos was forced out from Breitbart and dropped from the Conservative Political Action Conference after a video surfaced in which he appeared to defend pedophilia.

Though Yiannopoulos was permitted to keep his $80,000 book advance, he sued the publisher in July. A New York Supreme Court judge in October rejected Simon & Schuster’s motion to dismiss the lawsuit.

But Yiannopoulos has otherwise had a spectacularly bad year. His effort to organize a “Free Speech Week” fell apart after he neglected to actually inform the slated speakers that they were invited. And in October, BuzzFeed published an explosive exposé on Yiannopoulos’ successful campaign to “smuggle” Nazi and white nationalist ideas into Breitbart’s stories and the broader political discourse.

It’s unclear why Simon & Schuster thought Yiannopoulos—whose views on women, gay people, minorities, and Muslims were well-known long before his concerted attempts to mainstream white nationalism were uncovered—was the best person to author a “serious work addressing political correctness and related free speech issues,” as they referred to the initial publication deal in a court document.

His contract was with Threshold Editions, a Simon & Schuster imprint aimed at a conservative audience, and Ivers has personally edited books by President Donald Trump, conservative shock-jock Rush Limbaugh, and Project Veritas’ James O’Keefe. At various points in his notes, Ivers praises Yiannopoulos’ “well argued” points about why Black Lives Matter has failed as a movement, or how the left abandoned white working-class voters.

But the notes by Mitchell, which circulated on Twitter Thursday, elucidate how the book failed to live up to what Simon & Schuster ostensibly thought they’d signed up for.

“No need to drag lesbians into this!”

“I will not accept a manuscript that labels an entire class of people ‘mentally ill.'” 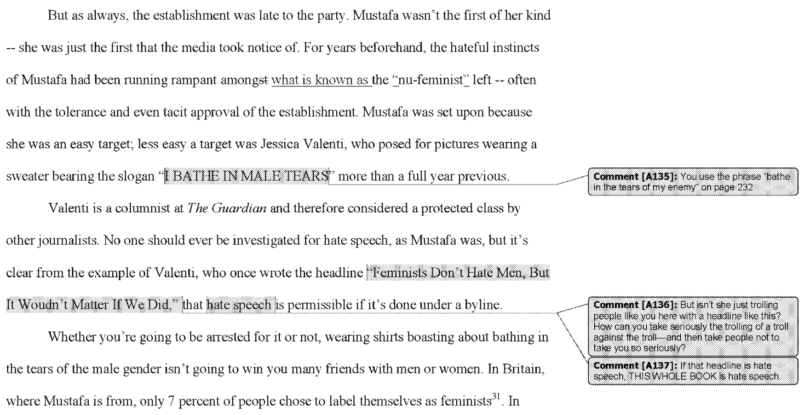 “The way you casually bring up the KKK makes no sense”

“Three unfunny jokes in a row.”

Read the full annotated manuscript below.