Dominating headlines this week is the startling revelation that Donald Trump, Jr. met with a Kremlin-connected attorney who promised damaging information about Hillary Clinton as part of a Russian government effort to help his father’s campaign.

But that June 2016 meeting, which the President’s son-in-law, Jared Kushner, and then-campaign chairman Paul Manafort also attended, served another purpose for the Russian lawyer, Natalia Veselnitskya, and her wealthy client Denys Katsyv: It was a stop on a major PR tour against a sanctions bill.

Katsyv had retained Veselnitskaya as his defense counsel in a vast money-laundering scandal ensnaring his consortium of businesses, the Prevezon Group. But the Russian real estate baron was associated with another operation at work under the anodyne name of the Human Rights Accountability Global Initiative Foundation, which was founded in February 2016 and dedicated to the apparently noble mission of helping “restart American adoption of Russian children.” When the meeting was first reported by the New York Times, Trump Jr. said only that he and Veselnitskaya met to discuss the adoption issue.

Veselnitskaya had been accused of lobbying U.S. officials on behalf of the foundation before. The foundation had just two registered lobbyists, one of whom, Rinat Akhmetshin, had worked for Russian counterintelligence. And the foundation wasn’t asking for the reinstatement of an adoption program; it was, at least by implication, offering it. The group sought the alteration of a U.S. sanctions program that was about to become law, the Global Magnitsky Act, which was named after a dead Russian whistleblower. The original Magnitsky Act, enacted in 2012, had annoyed Russian President Vladimir Putin so much that he banned American adoptions of Russian children in retaliation; the expanded version had him enraged.

“What’s happening around the time of her meeting with Don, Jr. is the most serious-resourced and aggressive counterattack ever that the Kremlin has mounted on the Magnitsky Act,” one congressional aide told TPM. “They have learned over the years in their attempts to fight and derail this and they have gotten better at it. They’ve involved less ham-handed folks, and less people who might be out of central casting.”

In his 2007 book “The Oil and the Glory,” journalist Steve LeVine describes the charming “English-speaking former Soviet Army counterintelligence officer” Akhmetshin as he appeared in 1999, when he went to work lobbying Washington on behalf of crusading Kazakh politician Akezhan Kazhegeldin. “The stylish Akhmetshin looked harmless enough, with his designer spectacles and fresh, youthful face,” LeVine wrote.

Akhmetshin, who has said repeatedly that he no longer works for Russian intelligence, did not return multiple calls to a number listed under his name in Washington, D.C. But even as a beltway freelancer, Akhmetshin has been involved in Russian and Eastern Bloc politics for two decades, so the now-notorious Magnitsky affair is firmly in his wheelhouse.

Sergei Magnitsky, a whistleblowing accountant who died in prison in 2009, apparently after being severely beaten, had become a cause célèbre after Chicago-born millionaire William Browder, who had retained Magnitsky’s firm to investigate irregularities in his Russian businesses, publicized the conditions of his death. Magnitsky had been imprisoned after he exposed the alleged money-laundering scheme in which Katsyv was implicated while working for Browder. Browder, an investment banker with significant Russian holdings, had become a key witness for then-U.S. Attorney Preet Bharara’s prosecution of Katsyv and Prevezon, which the government settled at the end of May, less than a week before jury selection was to begin.

Naming the law after Magnitsky goaded Putin and Katsyv alike, as it emphasized apparent corruption in Putin’s regime and Katsyv’s alleged complicity in the same. Both want it renamed. Katsyv employed Akhmetshin to explore the corridors of power for ways to accomplish that.

Browder told TPM that Veselnitskaya’s 2016 meeting with Trump Jr. didn’t surprise him in the least. “They were trying to get in touch with anybody who had any power,” he said. “I’m sure they’d have tried to contact the Clinton campaign if they thought they would help.”

The investor also caught Akhmetshin at a recent hearing—a House Foreign Affairs Committee hearing on Putin’s Russia that Veselnitskaya also attended, according to the Daily Beast. Browder provided two photos to TPM, shown at the top of the page and below. 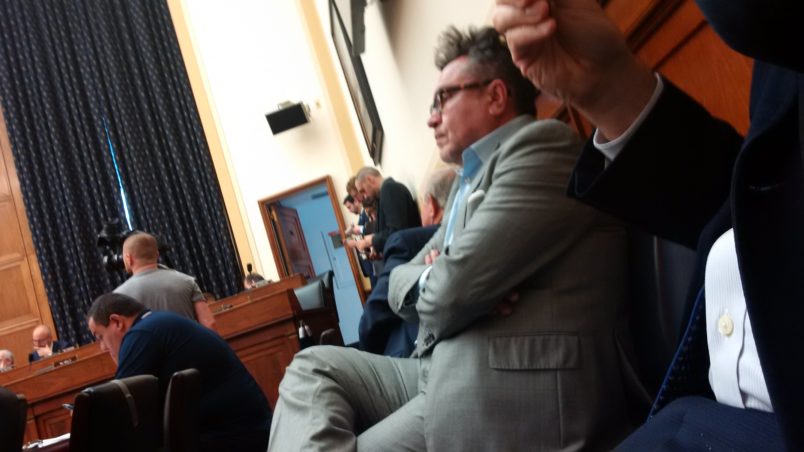 By 2006, Akhmetshin was at work in Washington on behalf of Azeri politicians, according to lobbying disclosures. In 2011, he was accused of participating in an attempt to paint asylum-seeking Russian bureaucrat Ashot Egiazaryan as an anti-Semite in order to enlist Jewish groups to prevent him from being admitted to the United States (Browder echoed the accusation that Akhmetshin smeared Egiazaryan in a phone interview). Akhmetshin has never registered as a foreign agent, however, according to complaints Senate Judiciary Chairman Chuck Grassley (R-IA) has filed with the Justice Department.

Akhmetshin acknowledged to Politico last year that he previously worked for Russian counterintelligence, but protested that “Just because I was born in Russia doesn’t mean I am an agent of [the] Kremlin.” The context for Akhmetsin’s semi-denial is striking: he met multiple times with Rep. Dana Rohrabacher (R-CA), Politico reported, once in April 2016 at the lobby bar of the Westin Grand Hotel in Berlin and then a month later at Rohrabacher’s office.

Whether Katsyv and Putin are working in concert or have coincidentally aligned goals, Rohrabacher had already received a document from a Moscow politician that made explicit a quid pro quo that lobbying boilerplate from Katsyv’s foundation only implies. Rename the Magnitsky Act, it said, and Putin will drop the adoption ban he imposed in retaliation, according to a Politico reporter who saw the document. After the May 18 meeting in Rohrabacher’s office, the California Republican proposed changing the name on the legislation, calling it “a gratuitous slap at Russia.”

On June 9, Veselnitskaya met with Trump Jr. And less than a week after that fateful rendezvous at Trump Tower, Akhmetshin was planning what Katsyv must have hoped would be the most memorable part of the anti-Magnitsky Act publicity blitz: The screening of a documentary that would tell his version of the Magnitsky affair.

A well-regarded Russian documentarian named Andrei Nekrasov had agreed to tell Katsyv’s version of events, and despite Browder’s attempt to sue Nekrasov to prevent the film’s distribution, it screened at the Newseum in D.C. on June 13 with a talkback moderated by legendary investigative journalist Seymour Hersh. Akhmetshin was in attendance, according to coverage of the screening by Radio Free Europe.

At a glance, the event might have looked as if it had been scheduled by the Newseum, but in fact a D.C. PR firm representing Nekrasov called the Potomac Square Group had rented out the facility. Browder claimed to TPM that Katsyv had bankrolled the entire event, including the film’s production. Akhmetshin denied that the foundation paid for the event.

According to video of the talkback, irate Russian protestors jeered at Hersh and at Nekrasov after the screening.

“He’s not a journalist,” says one protester in a video posted to Veselnitskaya’s Facebook page, apparently about Nekrasov. “He’s a state propagandist, and he’s talking about first amendment in a country where it exists while in Russia, no one can speak because of these people.” A man arguing with him cites Hersh’s bona fides, saying “Just let him finish.”

“No respect to propagandists,” the protestor replies.

New!
Start your day with TPM.
Sign up for the Morning Memo newsletter
Sam Thielman Sam Thielman is an investigative reporter for Talking Points Memo based in Manhattan. He has worked as a reporter and critic for the Guardian, Variety, Adweek and Newsday, where he covered stories from the hacking attacks on US and international targets by Russian GRU and FSB security services to the struggle to bring broadband internet to the Navajo nation. He lives in Brooklyn with his wife and son and too many comic books.
Have a tip? Send it Here!
Latest Muckraker
Comments
Masthead Masthead
Founder & Editor-in-Chief:
Executive Editor:
Managing Editor:
Associate Editor:
Investigations Desk:
Reporters:
Editor at Large:
General Counsel:
Publisher:
Head of Product:
Director of Technology:
Associate Publisher:
Front End Developer:
Senior Designer: