Bank CEO Stephen Calk has been charged with financial institution bribery for the $16 million in loans he extended former Trump campaign chairman Paul Manafort in late 2016 and early 2017, allegedly in the hope that Manafort would secure him a position in Trump’s cabinet.

The indictment, filed in the Southern District of New York and unsealed Thursday, accused Calk of misleading his bank’s primary regulator, including by claiming he never desired a position in the Trump administration.

Many of the details in Thursday’s indictment were made public in Manafort’s financial crimes trial in Virginia over the summer. However, the indictment revealed that — in addition to an email Manafort sent Trump’s son-in-law Jared Kushner  flagging Calk’s resume — Manafort also reached out to another  unidentified Trump transition figure seeking that Calk be interviewed for Army Secretary. Calk ultimately interviewed for the position of Army under secretary in early January at Trump Tower in Manhattan, according to the indictment, though he was never appointed to Trump’s cabinet.

Manafort first began pursuing the loan from Calk’s bank, Federal Savings Bank, in summer 2016. By August, Calk was named to a campaign economic advisory committee, “consistent” with Calk’s “request” to “participate in the Presidential campaign,” according to prosecutors.

In the months following, Calk assisted Manafort in structuring the loan, with Manafort at one point praising Calk’s “cleverness” and thank him for “fixing” his issue

At the time, Manafort was in severe financial straits, due to other loans he had a secured — some of them fraudulently — and his penchant for a extravagant lifestyle, even as his income from his Ukraine consulting work had dried up.

An initial loan package fell through in October, but in November, shortly after Trump’s election, Calk again began working on getting Manafort a $9.5 million loan, according to prosecutors. The bank closed on the $9.5 million loan later that month, according to the indictment. Manafort then sought an additional $6.5 million loan. “Concerns about the Borrower’s ability to repay even the first $9.5 [million] loan had already been raised, as noted above, and CALK was further aware of [Manafort’s] dire circumstances at this time,” the indictment said, pointing to Calk’s alleged awareness that Manafort was trying to head of foreclosure proceedings on properties upon which he already had taken out other loans.

The indictment goes on to outline the scrambling internally in the bank as Manafort allegedly pressured Calk get the second loan deal done.

Calk was cc’d on a Manafort email to a bank loan officer, asking for an update on the schedule, that said “the clock is ticking and we are getting pressure on a number of fronts,” according to the indictment. That day, Manafort also emailed Kushner Calk’s resume, while noting Calk’s “preference” for the Army Secretary. 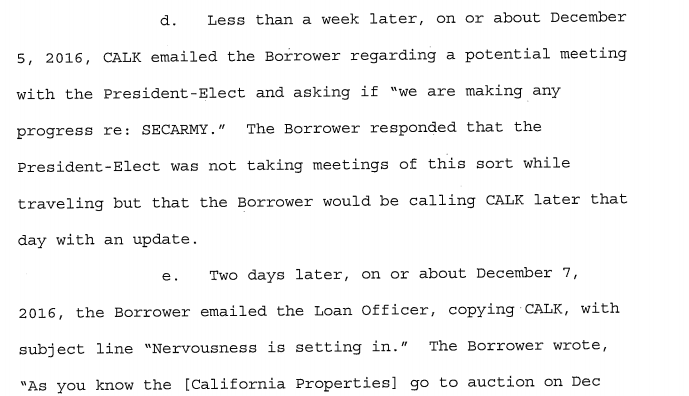 When Manafort reached out to the second transition official seeking an interview for Calk, he was told that another candidate was already being considered for the Army Secretary position but that Calk could interview for the under secretary position, according to the indictment. That interview happened on January 10, 2017, and was with three transition officials, according to the indictment.

By then, Manafort had been approved for the additional $6.5 million loan, and  the transfer of funds happened a week after Calk’s interview with the Trump transition team, according to the indictment.

Read the indictment below: