6 hours ago
WATCH: House Dems Formally Walk Article Of Impeachment Over To Senate

6 hours ago
Schumer Defends Impeachment Trial: ‘Most Despicable Thing Any POTUS Has Ever Done’

7 hours ago
Latest Capitol Arrestee Once Opened For Trump, Pence At Campaign Rally

Why Is The Overstock.com CEO Writing Himself Into The Trump-Russia Story?

The CEO of Overstock.com wants the public to know he’s a big part of the Trump-Russia story.

According to a press bulletin issued by the publicly traded firm after Monday trading hours, CEO Patrick Byrne wants you to know two things:

This story may sound fantastical, but it’s getting attention. Fox News has picked up on elements of the story, while an attorney for alleged Russian agent-of-influence Maria Butina sent a letter to Justice Department demanding a probe into Byrne’s accusations.

Meanwhile, in the two days since the Overstock CEO issued the statement, the company’s shares have plummeted more than 36 percent, amid a general selloff in the market.

So what’s Byrne talking about?

But in a statement to TPM, Byrne said he was “ethically obligated” to speak out.

“Watching my country rip itself apart when I know the truth has been hard,” Byrne said. “It has reached the point where people are driving 600 miles to shoot 20 strangers. I decided that as a matter of conscience I had to tell the truth, let chips fall where they may.”

His earlier remarks — and those of other bit players in the never-ending Trump-Russia saga — offer a few additional suggestions.

In the statement, Byrne writes that Fox News contributor Sara Carter has written accurately about his situation on her blog, and that he is, in part, “confirming” what Carter had written.

Carter “broke” a story about Byrne last month that got some significant pickup in the conservative media. In that story, the Overstock CEO claimed to have had a fling with Butina, during which he discovered exculpatory evidence that would help Butina’s case, and that he accuses prosecutors of withholding. 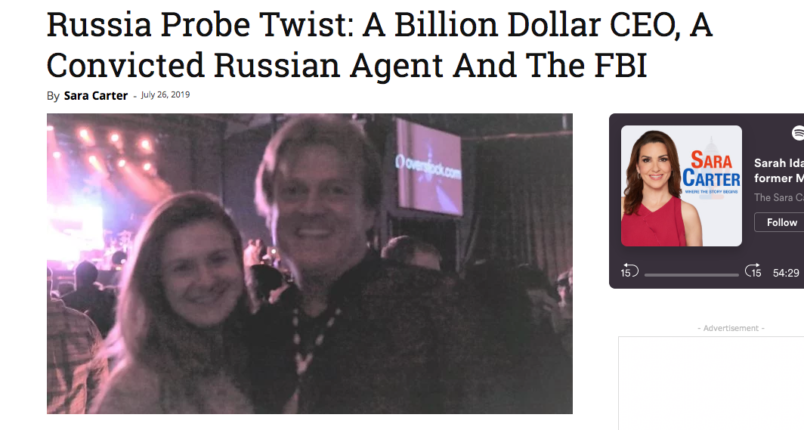 Byrne’s claims spurred Butina attorney Robert Driscoll to send an angry letter to John Durham, the former U.S. attorney empowered by Attorney General Bill Barr to lead a civil review of the origins of the FBI’s probe into Russian interference in the 2016 election. Driscoll also sent the letter to DOJ Inspector General Michael Horowitz, who is conducting a separate probe into the FBI’s handling of Russiagate.

But Byrne’s statements this week appear to reveal that he is under the impression that he is a main source for Durham.

One hour before Overstock issued its press release, Carter published a story declaring that Byrne had upended the political establishment by giving “emails and text messages” to the Durham investigation.

“This is going to become the greatest political scandal in U.S. history,” Byrne is quoted as saying in Carter’s story.

The same day, Byrne took to Fox to declare that — as a result of the Durham inquiry — Barr is about to purge the country’s so-called “deep state.”

“There is a deep state like a submarine lurking just beneath the waves of the periscope depth watching our shipping lanes,” Byrne said on Fox Business on Monday. “And a nuclear icebreaker called the USS Bill Barr has snuck up on them and is about to ram midship.”

Byrne’s actions may be surprising. His statements have knocked more than a third of the value off of his company, and he has so far failed to publicly provide any evidence corroborating or further fleshing out his claims.

But he has a storied history of bizarre statements. In 2005, he held an hour-long conference call blaming someone called the “Sith Lord” for financial problems at his company, and led a campaign to make short-selling illegal. Elsewhere, he has argued that the financial system faces impending doom, and that Bitcoin is the way out.

But as a Marketwatch columnist Therese Poletti noted, this latest episode is weird even for Byrne.

In any case, Byrne let the world know what he will be doing as the value of his company continues to tank following his comments and a general downturn in the stock market.

“I plan on sitting back and watching the United States Department of Justice re-establish Rule of Law in our country,” he said in the conclusion to his Monday statement.