12 hours ago
‘No Such Thing As No Risk,’ Atlas Says While Pushing Policy Experts Say Will Increase Death

Voting rights advocates may have lost a major battle Monday with a 5-4 Supreme Court decision upholding Ohio’s aggressive voter purge policies, but they’re not willing to concede the war.

On a phone call with reporters after the Supreme Court handed down its decision in Husted v. A. Philip Randolph Institute, lawyers for the plaintiffs in the case hinted at what could be another legal strategy for blocking Ohio-style purges, which begin the process of removing voters from the rolls merely because they have not voted.

Naifeh indicated that both the Voting Rights Act, which bans election laws that are racially discriminatory in their intent or effect, as well as the National Voter Registration Act, which requires that voter registration list maintenance policies be “nondiscriminatory,” could be legal bases for future challenges to voter purges.

Monday’s Supreme Court opinion did not deal with whatever alleged discriminatory effect Ohio’s purge protocol had. Rather, it assessed whether the system was legally permissible under language in the NVRA that bans purging “by reason of the person’s failure to vote.”

Under the Ohio regime, voters who don’t vote in a two-year federal election cycle are sent mailers asking that they confirm they still reside where they are registered to vote. If the voters don’t respond to the mailers, and don’t engage in any voter activity — which includes, voting, updating one’s voter registration info, or participating in voter petitions — in the next two federal election cycles, they are removed from the rolls.

In essence, a voter can be purged if he or she sits out two midterms and a presidential election, and fails to respond to the mailer sent by the state.

The conservative majority’s opinion, written by Justice Samuel Alito, revolved around a complicated interpretation of how the NVRA language interacted with another voting law later passed by Congress, the Help America Vote Act.  He concluded that the Ohio system didn’t violate the NVRA’s failure-to-vote language since the state also sent the written mailers.

Alito also responded to a searing dissent offered by Justice Sonia Sotomayor. In it, she said that friend-of-the-court briefs in the case had shown how the Ohio system “has disproportionately affected minority, low-income, disabled, and veteran voters.” 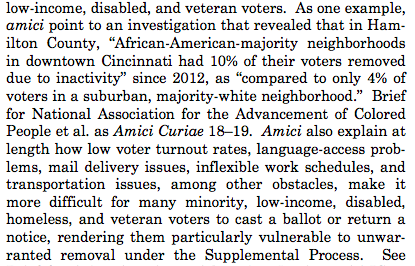 Setting aside the suggestion by Alito that he is inclined to side with claims that show intent to discriminate, not just discriminatory impact, it’s important to note that to bring a Voting Rights Act case, challengers must show more just a law’s disproportionate effect on a minority population, according to Justin Levitt, an election law expert at Loyola Law School in Los Angeles

“It’s not the case that every disparity alone is going to be a violation of the Voting Rights Act, or shows a violation of the Voting Rights Act. You need something more than just differential stats,” Levitt, a former top official in the Justice Department’s Civil Rights Division, said in a telephone interview with TPM. “That’s part of why the plaintiffs in the NVRA case today are saying they’re going back to look for more information” about the effect of the law on minorities, he said.

Likewise, Levitt said, the nondiscrimination language in the NVRA — while less litigated than the VRA — requires more than “just showing more minorities were affected than white people.”

ACLU voting rights attorney Dale Ho pointed out on Monday’s teleconference call that there was already another anti-voter purge lawsuit underway that includes an issue not addressed in the Ohio case.

The lawsuit was brought against Georgia’s purge protocol — which is similar to Ohio’s, but sends the mailers to voters after three years of no voter activity. It includes a First Amendment claim, which alleges that Georgia, in its purge protocol, is violating Americans’ right not to vote.

“It penalizes people and targets them for removal from the rolls. So there’s another live legal argument in the ongoing litigation on this precise question,” Ho said.

The case was initially dismissed by a district court, but an appeals court sent it back to be reconsidered once the Supreme Court made its decision in the Ohio case, as well for “a more detailed analysis of the First Amendment question.”