Flynn Back In Biz With New Lobbying Firm: ‘His Experience Speaks For Itself’

LATE UPDATE 7/11 10:50 a.m.: Hours after this story broke, Michael Flynn’s lawyers said the announcement was a “misunderstanding” and he had not yet joined Stonington Global.

As he awaits sentencing for lying to federal investigators, former Trump national security adviser Michael Flynn is getting back in the consulting and lobbying game with a newly formed D.C. firm.

Muzin and his New York partner Joey Allaham did not personally know Flynn, but are doing business with him because “his experience speaks for itself,” Allaham told the Journal.

The duo’s most recent venture was a $300,000 per month positive PR campaign for Qatar that involved brokering connections between the royal family and associates of President Donald Trump. Muzin announced in June that the contract was ending after his firm was sued by Elliott Broidy, a top Trump fundraiser, on allegations that it helped Qatar hack into Broidy’s emails.

“I will work every day to put my 33 years of experience in the military and serving Presidents of both parties in the White House to good use in helping companies and governments enhance the goals of freedom and liberty,” Mr. Flynn said in a statement. 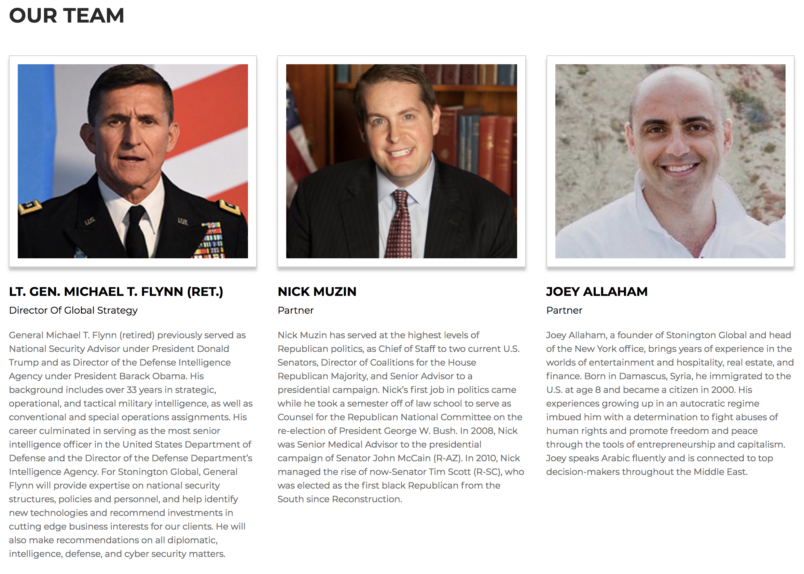 The news about Flynn’s new job opportunity comes the same day that the former senior U.S. official appeared in court for the first time since his plea deal with special counsel Robert Mueller was announced last December.

Flynn faces up to six months in prison for lying to the FBI about his contacts with Russian officials during the 2016 campaign. As part of his plea deal, he also admitted to working as an unregistered agent for Turkey in the run-up to the 2016 election.

Flynn has been cooperating with Mueller’s team for months, and the special counsel has thrice requested that his sentencing date be pushed back. Legal experts say that these requests indicate that Flynn is still providing valuable information to federal prosecutors.

Muzin and Allaham told the Journal that they believe Flynn will avoid jail time, but that he would need to step away from the firm for some period if he does end up being incarcerated.

A Stonington Global LLC was incorporated in Delaware on July 2, 2018, according to an online state database.

On Tuesday afternoon, a Youtube video titled “Stonington Global” was posted by a user with the name “Joesph [sic] Allaham.” Set to a twanging music loop, the brief clip advertises services like “election strategies,” “cyber security” and “defense procurement” as images of aircraft carriers and consultants pouring over spreadsheets flicker by.

Also joining Stonington is Flynn’s conspiracy-stoking son and former chief of staff, Michael Flynn Jr., but the firm did not specify what role the younger Flynn would have.

Flynn Jr. was actively involved in his father’s Turkey lobbying work, and the elder Flynn’s decision to cooperate with federal investigators was reportedly motivated in part by concern about the legal jeopardy Flynn Jr. faced.

The younger Flynn is known for his active support of the bizarre Pizzagate conspiracy theory, which holds that top Democratic operatives are involved in a child sex trafficking ring. As recently as Monday, Flynn Jr. was also promoting conspiracies about the death of Seth Rich, the Democratic National Committee staffer who was killed in a botched D.C. mugging.

Allegra Kirkland (@allegrakirkland)  Allegra Kirkland is a New York-based reporter for Talking Points Memo. She previously worked on The Nation’s web team and as the associate managing editor for AlterNet. Follow her on Twitter @allegrakirkland.
Have a tip? Send it Here!
Latest Muckraker
Comments are now Members-Only