3 hours ago
Ex-Bush AG: There May Be A ‘Case For Seditious Conspiracy’ After Hutchinson Testimony

9 hours ago
Kagan Calls EPA Decision What It Really Is: Unvarnished Hostility Towards Agency Power

Kobach To Ross: Add Census Citizenship Question To Change How Districts Are Drawn

Kansas Secretary of State Kris Kobach personally urged Commerce Secretary Wilbur Ross to add a citizenship question to the Census, documents released late Friday revealed. Kobach — in July 2017 — cited specifically the desire to exclude certain non-citizens from U.S. congressional apportionment. Such a move would have drastic political implications, and would shrink the representation of states with large immigrant populations — many of which are Democratic states — in the U.S. House of Representatives.

That rationale is different from the one Ross pointed to when he announced he was added the question: a Justice Department request for the data for Voting Rights Act enforcement.

Kobach also proposed asking non-citizens whether they had a green card.

The Kobach emails, which were sent several months before the Justice Department formally requested the citizenship question, also indicated that Kobach and the Commerce secretary had spoken over the phone about the issue “at the direction of Steve Bannon.”

The rest of the email chain suggests that Ross and Kobach spoke on the phone again about the matter.

The email was released late Friday evening among more than 1,000 pages of emails, letters, memos and reports related to the administration’s planning for the 2020 survey, many of them specifically concerning the debate over adding the question.

The Commerce Department turned over the documents as part of a lawsuit, brought by New York and other states and localities, challenging the move to add the question. Critics of the decision argue that it was made hastily, without proper testing, and that it stands to discourage immigrant participation on the decennial survey. An undercount would have major implications for the political power of, and federal funding for, places with large immigrant communities.

Ross, in announcing the decision to add the question in March, pointed specifically to the Justice Department’s request, which many view skeptically given that, for decades, lawsuits seeking to enforce the Voting Rights Act have been brought successfully using citizenship data collected in other surveys.

Kobach was not the only supporter of the move to suggest to Ross that the citizenship data would also allow for apportionment and redistricting to be carried out in a way that excludes certain non-citizens.

Peter N. Kirsanow, a Republican member of the U.S. Commission on Civil Rights noted in a March 2018 letter that “Congress is unlikely to act to exclude illegal aliens from apportionment, particularly because states that have large number of illegal aliens would fiercely fight such a change for fear they might lose a congressional seat.”

But he suggested states would opt to draw state legislative districts based on the state’s number of citizens, rather than total population, and “we should give them the data to do so.”

Likewise, Jeff Landry, the GOP attorney general for Louisiana, told Ross in a March 2018 phone conversation that states would like to use the citizenship data in redistricting, according to internal notes from the conversation released Friday. 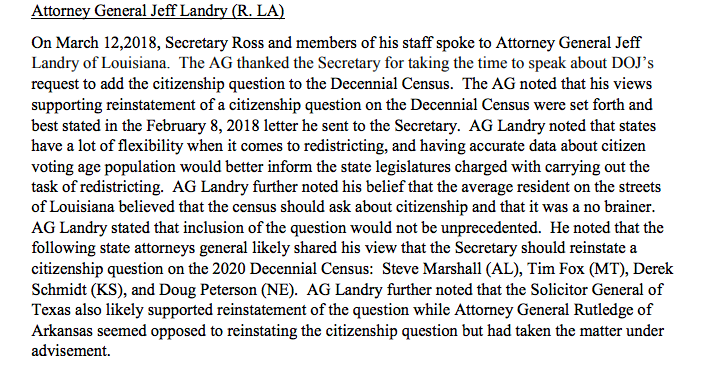