17 hours ago ago
‘No More Crazies’: Trump’s Final Days In Office, As Documented By The Jan. 6 Committee

John Lott, a pro-gun rights writer who 10 years ago also wrote an article about voter fraud, appeared in front of the President Trump’s voter fraud commission Tuesday to promote an idea that appeared to be a troll of Democrats concerned that the commission would lead to restrictive elections laws that would suppress voting.

To quell Democrats’ concerns about anti-fraud measures leading to voter suppression, Lott suggested that the background check system that is used to clear gun purchasers should be used on those seeking to vote, as was hinted in a copy of his presentation posted online by the White House last week: 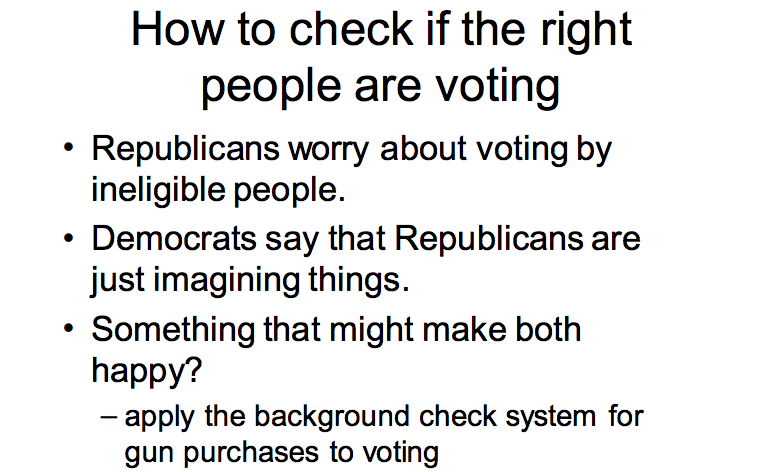 “Democrats have long been concerned about voter suppression but they’ve also long lauded the background check system on guns, saying it’s simple, accurate, in complete harmony with the right of people to go and defend themselves,” Lott said, while referencing a quote from Senate Minority Leader Chuck Schumer (D-NY) praising the use firearm background checks.

“If they don’t believe that it suppresses people’s ability to defend themselves, would we believe that using this system would suppress being able to go and vote?” Lott said

He went on to claim that the gun background check systems is “actually very close in many ways to what we care about whether people can legally vote.”

The commission returned to the topic during a Q&A portion at the end of the panel, when Maine Secretary of State Matt Dunlap (D) seemed incredulous that Lott was actually promoting use of the gun background check system, known as the National Instant Criminal Background Check System (NICS), for voting.

“I was sort of under the impression that you were making a comparative analysis, but are you suggesting that we use the NICS system for elections?” Dunlap said.

Lott dug in, telling Dunlap that, “It seems like it would solve a lot of the political divisions that are there.”

“NICS was never intended to be used as an elections tool,” Dunlap later countered.

His idea was also questioned by Christy McCormick, a Republican on the commission who also serves on the Election Assistance Commission. She asked Lott whether he thought election officials should use NICS in addition to the other databases they use in maintaining voter rolls, or whether NICS should replace the current systems. Lott seemed to suggest the latter, calling gun background checks “one-stop shopping in terms of covering all the different aspects.”

The NCIS database is not as accurate or as clear-cut for uses of voting as Lott made it seemed. For one, states have varying laws when it comes to felons voting, and those don’t line up with the crimes that bar convicts from owning guns and thus trigger NICS.

Additionally, using the NICS database for citizenship queries is also a questionable idea. Its screening is aimed at those who have renounced their citizenship — an exceedingly rare reason gun purchases are blocked. Gun purchasing applicants are asked to supply their citizenship status, and non-citizens are then run through a separate screening to confirm their immigration status, which doesn’t necessarily bar gun ownership.

Lott’s track record on gun rights has previously been heavily scrutinized. He once claimed an article of his had been in a peer-reviewed journal when in fact that journal had rejected it, and Lott was also caught posing as a fake internet commenter to promote his ideas.