Among the Russia-linked Facebook and Instagram ads released Wednesday by the lawmakers probing Russia’s 2016 election meddling are a number of ads promoting rallies, marches and other physical events, suggesting that Russia sought to extend its influence beyond the confines of the internet.

In at least one case, the Russians were successful in using front groups to turn out protestors at events that the inauthentic accounts promoted on social media.

According to his presentation, a pro-Texas secession Facebook group called “Heart of Texas” promoted a “Stop Islamization of Texas” rally at the same time and place that a group calling itself “United Muslims of America” promoted its own “Save Islamic Knowledge” event.” Both Facebook pages were Russia-linked, according to the committee. 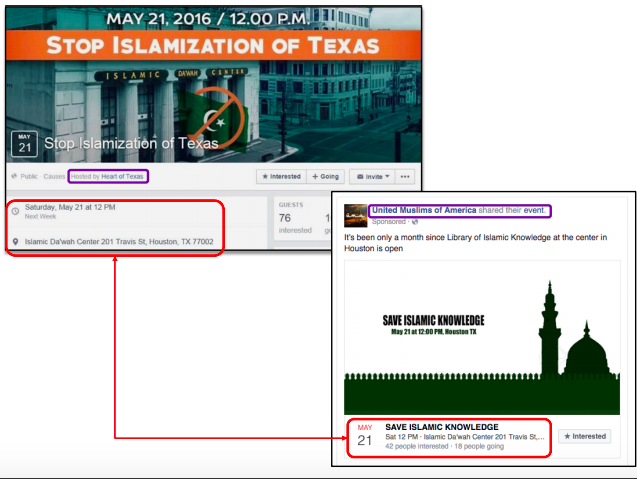 Demonstrators showed up for both events, and faced off across the street, according to Burr’s presentation. 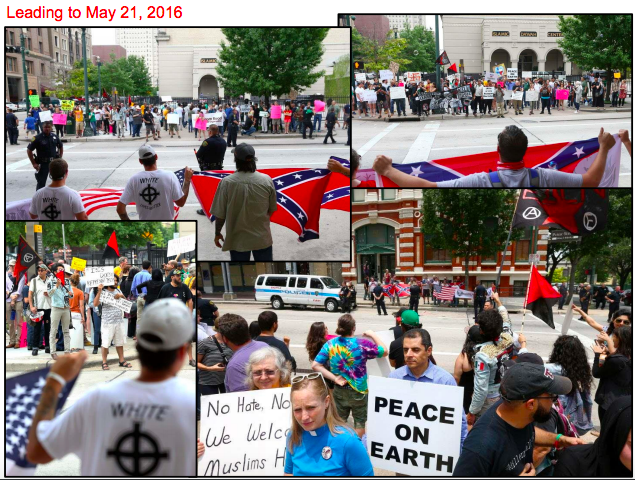 The Daily Beast, CNN and other outlets had previously reported on rallies and other real worlds events that appeared to have been pushed by an internet troll farm backed by the Kremlin. A batch of ads released Wednesday by the Democrats on the House Intel Committee, which also hosted a hearing on Russia and social media, provide a fuller picture of the various event pages now being linked to the Russian accounts.

In July 2016, a Facebook group calling itself “Being Patriotic” promoted an anti-Hillary Clinton event in New York City, targeting the promotion to Facebook users within 40 miles of the city who listed Donald Trump or the Trump campaign among their interests. 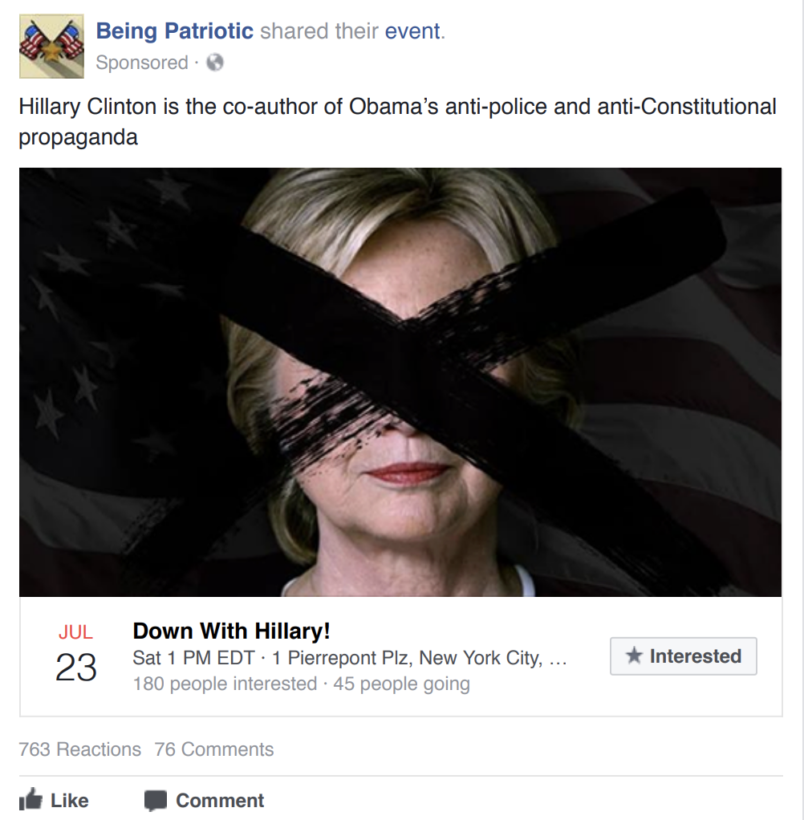 A pro-Trump Instagram ad promoted by an account called “_american.made” and labeled with a “Tea Party News” logo referenced rallies in cities across Florida. That ad ran in August 2016 and was targeted to users across the South who had interests in Republican, conservative, Tea Party and other right-leaning causes. 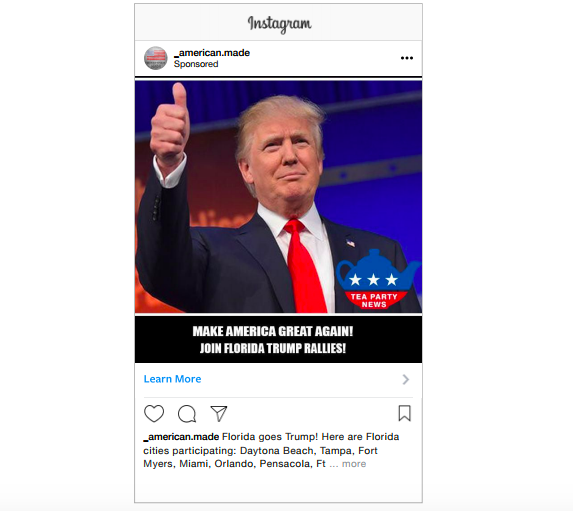 The  Facebook event ads included a pro-Clinton “Support Hillary. Save American Muslims!” ad promoted by the group “United Muslims of America” in June of 2016. 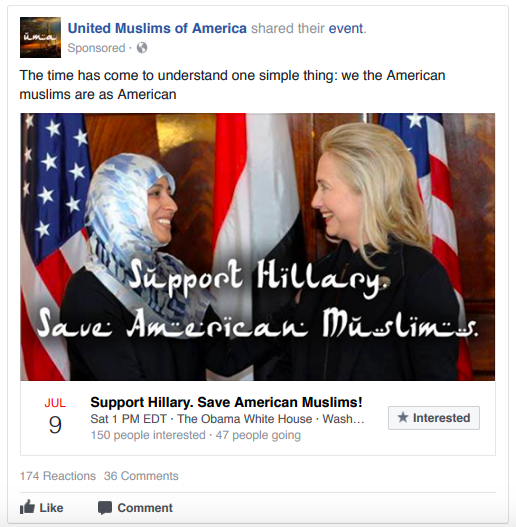 Even after the election, Russia-linked accounts promoted events, it appears from the ad released by House Intel Dems. In the days after the election, a “Trump is NOT my President” march in New York City instructed Facebook users to bring “signs, snacks, water!” to Union Square on Saturday, November 12. 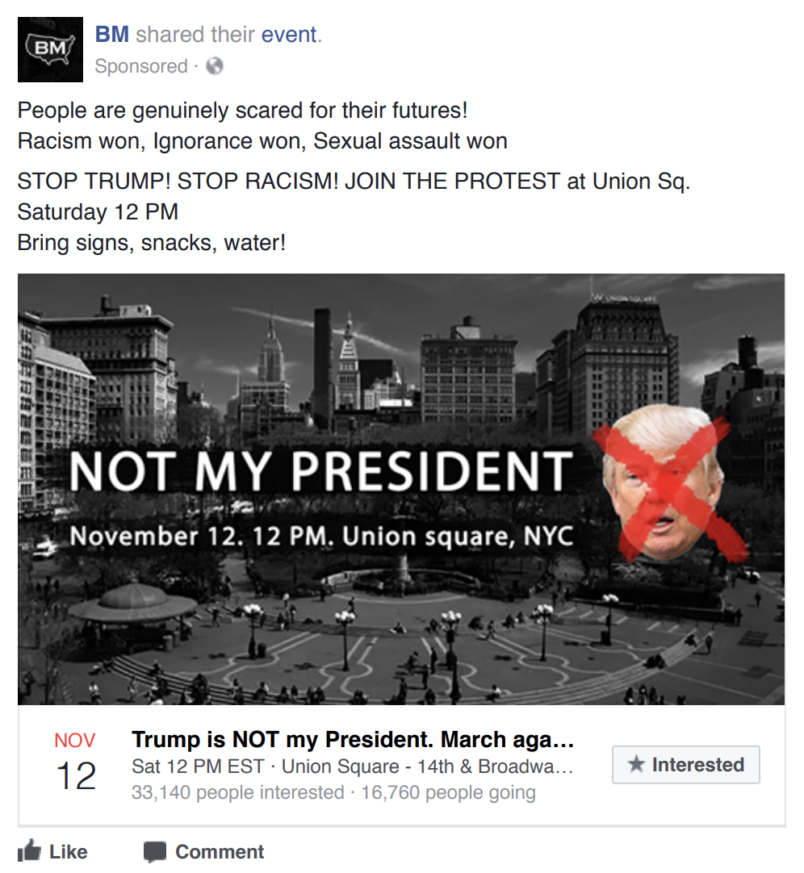 Like the other ads released, some of the events promoted by the Russian troll farms were not explicitly linked to a candidate. A May 2016 targeted at Facebook users in Kansas promoted a counter-protest to the anti-LGBT Westboro Baptist Church. 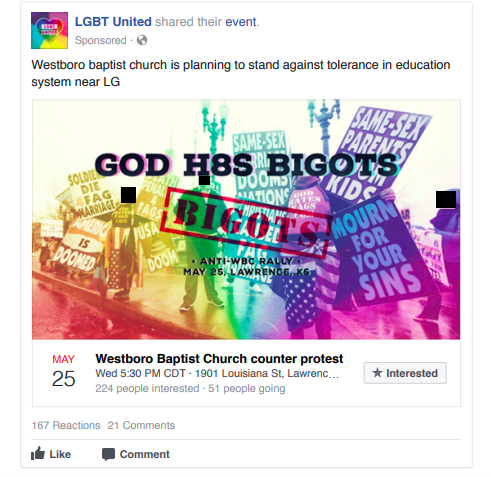