5 hours ago
Bannon Seeks Delay Of Contempt Trial Over Publicity Of Jan. 6 Hearings

11 hours ago
The Other Cancel Culture: How a Public University Is Bowing to a Conservative Crusade

The voting rights community isn’t holding its breath for a “report” expected out of President Trump’s sham election commission that advocates predict will be used as a cudgel for restrictive voting laws. They already have a good idea of how the Trump administration, led by Attorney General Jeff Sessions, will seek to scale back access to the ballot with an approach that has its antecedent in the scandal-plagued Justice Department of George W. Bush.

It was signaled clearly in a under-the-radar letter sent by the DOJ to most states late last month. The letter did not get as much as attention as the wide-reaching data request from the Trump election commission—which is being led by Vice President Mike Pence and hard-right Kansas Secretary of State Kris Kobach (R)—but voting rights advocates told TPM they find it just as concerning, if not more so.

“It’s very clear the intent is to purge more and more groups who possibly don’t vote the way they want them to vote,” League of Women Voters President Chris Carson told TPM.

Reading the cues in the letter, the National Voter Registration Act stands to be ground zero of the coming voter suppression wars, with experts predicting the feds will use it to pressure states into slimming down their registration rolls.

“It indicates that the focus of DOJ is going to be on pushing states to take more and more people off the rolls, instead of enforcing the provisions of the NVRA that assist voters in getting registered and staying on the rolls,” said Brenda Wright, vice president of policy and legal strategies at the progressive policy and legal group Demos.

The letter, dated June 28, asked states to hand over to the feds all information including “statutes, regulations, written guidance, internal policies, or database user manuals” that determine when a state removes from its rolls voters believed to be dead or have changed address. It cites the NVRA, also known as the “Motor Voter” Law, which sought to streamline the process for registering to vote at the DMV or other government agencies. The law also mandates a “reasonable“ standard of maintenance states must undertake to keep their registration rolls up to date.

Tellingly, the Justice Department letter focused only the latter provisions, and signaled no concern as to whether states were doing enough to make it easy to register, as the bulk of the NVRA dictates.

Experts in elections law advocate for clean and updated registrations rolls, but worry that if states are too aggressive or broad-stroked in purging voters, it ends with eligible voters being disenfranchised.

“The answer is not to be putting political pressure on election administrators and scaring them to do it sloppily and hastily, but making sure they have the resources and the education and the time to conduct a thoughtful approach,” Myrna Perez, deputy director of the Democracy Program at the Brennan Center, told TPM.

Studies have shown an abundance of false positives in the methods Kobach has sought to use to purge the voter rolls on a state level. The fear among voting right advocates is that an eligible voter will show up to the polls only to find that his or her registration has mistakenly wiped from the books and the deadline to re-register has already passed. Not lost on civil rights groups is that it’s often poor or minority communities that major purge efforts target, such as a 2012 attempted purge campaign in Florida, where a majority of the names removed were Hispanic until it was stopped by a federal court.

The Supreme Court will hear a lawsuit next term challenging Ohio’s protocol for removing voters, which is triggered if a voter doesn’t vote within a two-year span of elections. Against this backdrop, it appears that Trump allies will be seeking to gut the parts of the NVRA that make it easier to register to vote. Kobach was photographed with Trump earlier this year holding a proposal to amend the law, which has been an obstacle in his ability to implement a proof-of-citizenship voter registration requirement in Kansas. 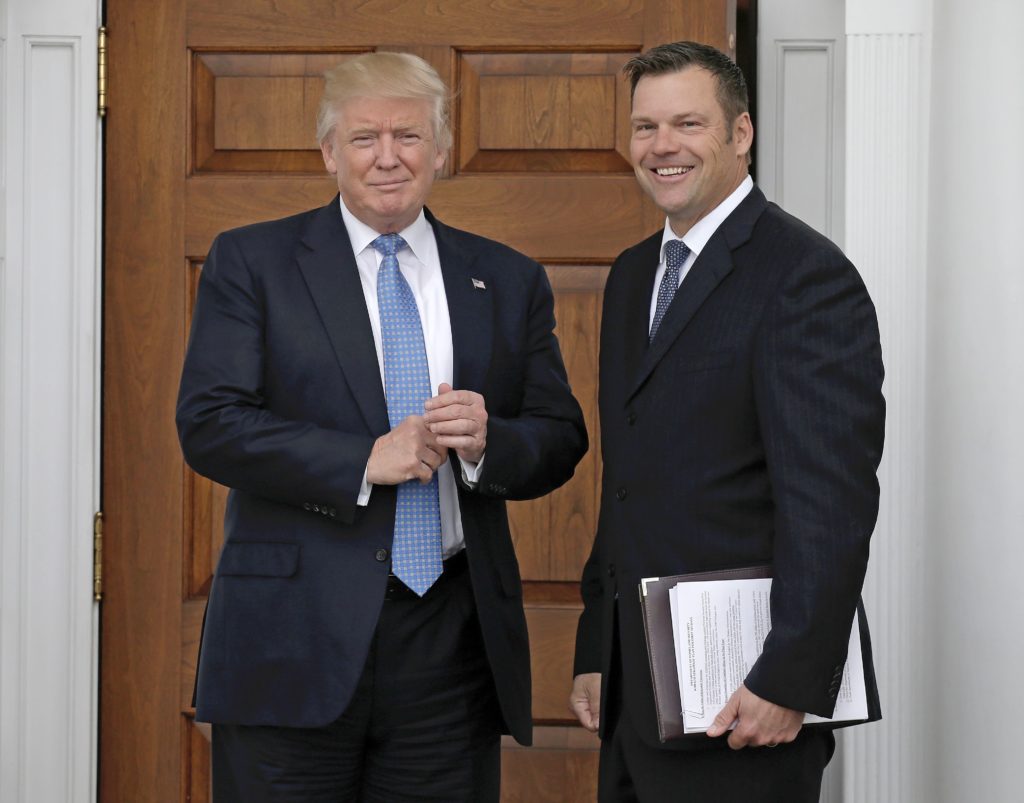 The voting rights community is seeing echoes of what unfolded at the Justice Department during the George W. Bush years. The Justice Department sent inquiries to a number of states—many of them swing states—in the mid-200os to put the pressure on election officials to undertake aggressive voter purges. The letters were sometimes followed by agreements or complaints.

The most notorious was perhaps the lawsuit the Bush Justice Department brought against Missouri, after the state had already removed 50,000 voters in a purge that a separate legal settlement found to have been done improperly. A U.S. attorney in Missouri, Todd Graves, was fired after refusing to sign on to the Justice Department complaint.

Some of the Bush alum pushing the DOJ in this direction spent the Obama years bringing private lawsuits against mostly poor, under-resourced communities, as Mother Jones documented last week.

“Anyone expressing alarm by these DOJ letters are enemies of equal enforcement where our voting laws are concerned,” said Logan C. Churchwell, a spokesman for Public Interest Legal Foundation, which is led by J. Christian Adams, one such former DOJ official. A few hours after Churchwell’s statement to TPM, the White House announced Trump had appointed Adams to the presidential elections commission.

“One question the voting rights world had was … are the conservative lawyers who had been pushing this agenda for a long time and their ideas going to essentially colonize the Trump administration’s voting rights enforcement?” said Michigan Law professor Sam Bagenstos, a former Obama DOJ appointee who served as the No. 2 official in the Civil Rights Division.

The June 28 letter appears to be an early indication that they have.