Federal prosectors in New York revealed on Friday that President Trump’s longtime fixer and personal attorney Michael Cohen has been under grand jury investigation for months for alleged “criminal conduct that largely centers on his personal business dealings,” and that as part of the investigation they had obtained previously covert search warrants for multiple Cohen email accounts.

The revelations were made in a court filing made public after a hearing Friday morning during which Cohen’s attorneys sought to prevent prosecutors from having access to documents seized in Monday raids on Cohen’s home, office and hotel room. Cohen’s attorneys are arguing that that either they or an independent third party should be allowed to sort out the records that fall under attorney-client privilege. Standard DOJ practice is that a team known as a “Filter Team” of DOJ lawyers separate from the prosecutors investigating the case undertake the review to screen out those documents.

Prosectors, in arguing that they should be allowed to follow the standard DOJ procedure for the records seized Monday, revealed that the raids were part of “a months-long investigation into Cohen,” that they sought “evidence of crimes, many of which have nothing to do with his work as an attorney, but rather relate to Cohen’s own business dealings.”

Prosecutors expressed extreme skepticism that Cohen has an extensive client list which was affected by the raid.

“Based on information gathered in the investigation to date, the USAO-SDNY and FBI have reason to believe that Cohen has exceedingly few clients and a low volume of potentially privileged communications,” prosecutors said in the Friday court filing.

The filing pulled no punches in attacking the arguments made by Cohen’s attorneys that they should have a chance to review the seized records before the prosecutors do.

Prosectors said that at least one witness has told investigators that Cohen has said that Trump was his sole client. They also rebutted Cohen’s claim that he had an privileged relationship with a law firm called in the filing Law Firm 1. 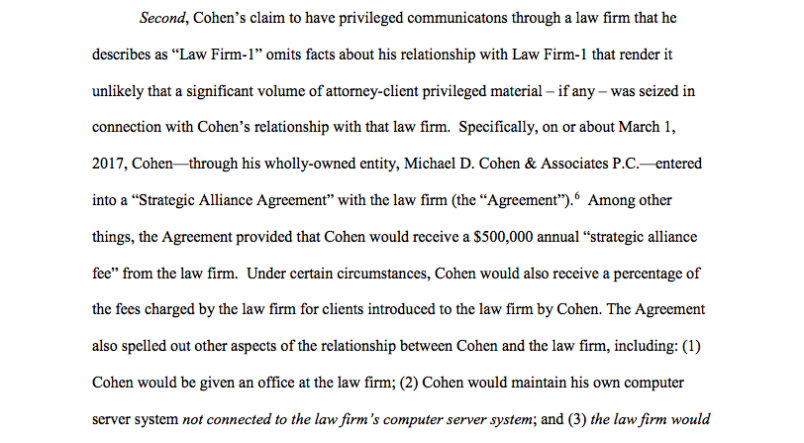 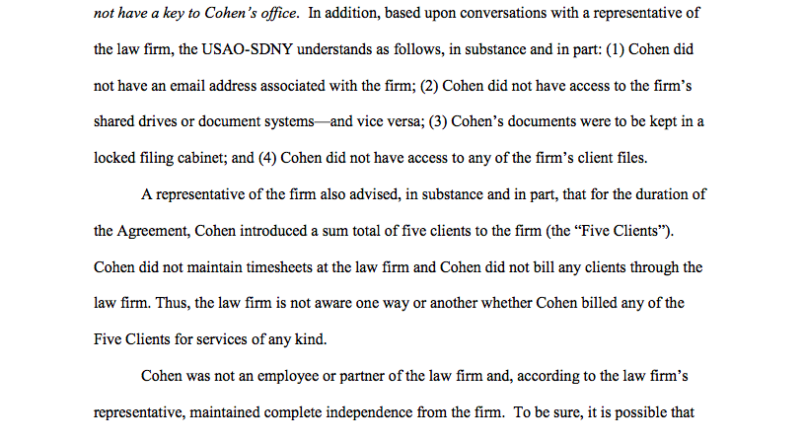 In its reference to the warrants already obtained for Cohen’s email accounts — which are seperate from those used to execute Monday’s raids — prosecutors said that those emails had already been sorted out by a Filter Team.

“The results of that review, as reported by the USAO’s Filter Team, indicate that Cohen is in fact performing little to no legal work, and that zero emails were exchanged with President Trump,” the filing said.

In a footnote, prosectors even cited Trump’s own words to suggest that Cohen’s communications about Stormy Daniels — an ex-porn star who Cohen paid off to keep her quiet about an alleged one-night stand with Trump — should not be treated as privileged.

“In the face of inaccurate and/or overbroad claims of privilege, the USAO-SDNY would be seriously prejudiced if it were not able, through a Filter Team, to evaluate the validity of such claims,” the prosectors said.

The filing discusses why prosecutors sought to use a search warrant to obtain the records the FBI seized on Monday, rather than a less intrusive subpoena or voluntary request for the documents. Much of that section is redacted, but at one point the filing argued that the “nature of the offenses—which sound in fraud and evidence a lack of truthfulness—weighed heavily in favor of the USAO-SDNY’s decision to execute search warrants.”

Cohen’s attorneys had filed their own motion Thursday night seeking to block the Filter Team from going through his records. That motion has not been released to the public. Since Friday’s morning hearing, the judge overseeing the case, U.S. District Judge Kimba Wood, has twice reconvened the parties involved to discuss the next steps. Another hearing is expected for Monday.

Read the full filing below: