1 hour ago ago
Meadows Is Now Engaging With Jan. 6 Committee After Initial Defiance

3 hours ago ago
‘PATRIOTS 45 MAGA Gang’ Indicted For Allegedly Planning Violence On Jan. 6

LATE UPDATE Aug. 17, 2017, 9:24 a.m.: VDare said in a statement that it had received a refunded deposit and check for “very significant damages” from Cheyenne Mountain Resort following the cancellation of its 2018 conference. Praising the “professionalism and courtesy” of the staff, founder Peter Brimelow called the cancellation proof of the power of the “Totalitarian Left” to “suppress a debate on immigration policy.”

“Cheyenne Mountain Resort will not be hosting the VDARE Foundation in April of next year,” resort spokeswoman Guadalupe Hirt said Wednesday in a statement to TPM. “We remain committed to respecting the privacy of guests at the resort.”

Virginia Dare, or VDare, had booked the luxury resort for a weekend of discussion about “patriotic immigration reform and American national identity” in April 2018, as Media Matters first reported earlier this month. The Southern Poverty Law Center labels VDare an “anti-immigrant hate site.”

Asked initially about its decision to host a group with direct ties to some of the country’s most prominent white nationalists, the resort told Media Matters that it would not comment on the “groups or individuals that hold meetings at the resort.”

TPM has reached out to VDare founder Peter Brimelow and his wife, Lydia, for comment. The link to the conference page on VDare’s website now informs visitors that the event was cancelled and that registered attendees would receive refunds.

That notice has replaced an invitation for the $225-per-person, three-day event, in which the group promised attendees access to the resort’s “naturally breathtaking landscape and exceptional hospitality,” as well as the opportunity to hear from a number of far-right luminaries, including Brimelow himself. 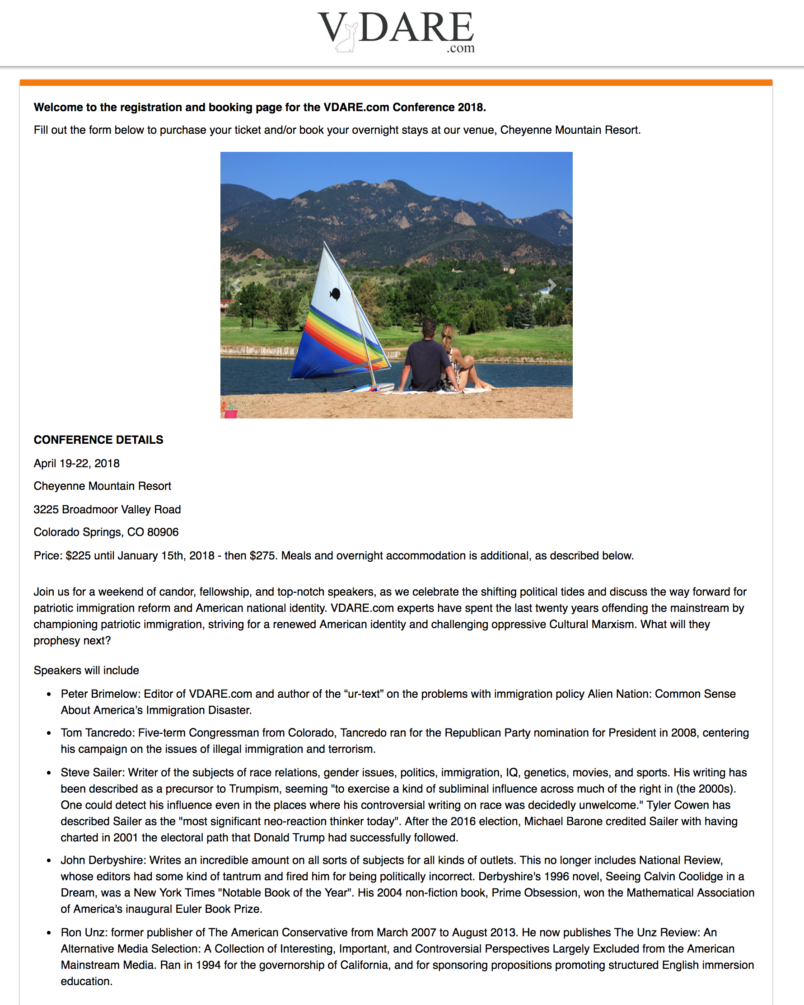 TPM screenshot of the invitation as it appeared last week.

Brimelow, the author of “Alien Nation: Common Sense About America’s Immigration Disaster,” adamantly denies that his site has a white nationalist bent. But white nationalist writers like American Renaissance’s Jared Taylor frequently contribute articles to the site. At a 2016 American Renaissance conference that a TPM reporter attended, Brimelow said that the “next time there are illegal alien demonstrations,” the federal government should “round them up and ship them out.”

Other planned speakers at the Dare event included former U.S. Rep. Tom Tancredo (R-CO), a Breitbart columnist who has said that “political correctness protests Muslim rape culture” and that Barack Obama was only elected President because the U.S. no longer had a “literacy test” for voting.

John Derbyshire, a longtime National Review columnist who was fired over an article suggesting white and Asian parents educate their children about the threats posed by black people, was also on the list of speakers. He has referred to himself as a “homophobe” and “a racist.”

VDare’s plan to convene in Colorado Springs was met with strong local pushback. Mayor John Suthers (R) said he could not stop the resort from hosting the group, but that the city would “not provide any support or resources to this event, and does not condone hate speech in any fashion.”

“The City remains steadfast in its commitment to the enforcement of Colorado law, which protects all individuals regardless of race, religion, color, ancestry, national origin, physical or mental disability, or sexual orientation to be secure and protected from fear, intimidation, harassment and physical harm,” Suthers said in a statement on his website.

A Change.org petition circulated this week to try to convince the resort not to host the conference and garnered over 4,0000 signatures.

VDare’s attempts to hold its first-ever conference have been thwarted before. After Media Matters informed Tenaya Lodge, a resort near Yosemite National Park, about the group’s views earlier this year, the resort canceled the conference, saying it was unaware “of the nature of” the organization.

Pushback against white nationalist groups and other hate groups has escalated in the wake of the chaotic “Unite the Right” rally over the weekend in Charlottesville, Virginia, which left dozens injured and three people dead. According to its website, VDare also has had its PayPal account abruptly pulled, as happened to the neo-Nazi site The Daily Stormer.

A number of the participants in the “Unite the Right” rally since have been dismissed from their jobs, and planned white nationalist events in Boston and at Texas A&M University have been canceled.

Correction: The original version of this post erroneously identified Colorado Springs Mayor John Suthers as a Democrat. He is a Republican.