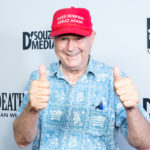 McGahn’s team will reportedly spearhead the confirmation process, a prospect rosy enough that he will be able, at least temporarily, to put aside his increasing difficulties in dealing with the President.

Per ABC, Short is now expected to stay on until October to help coordinate Senate offices — previously, he planned to leave in July.

Bremberg has pushed back plans to leave, though he has not confirmed to ABC that the decision is directly linked to the confirmation process, which he will help coordinate in a minor role.

Trump said last week that he has winnowed his list of Supreme Court candidates to five, and plans to announce his pick on July 9.