42 mins ago ago
Coons: ‘Frustrations’ Among Dems After Sinemanchin Joined GOP’s Opposition To Filibuster Carveout

3 hours ago ago
Sanders: Arizona Dems’ Censure Of Sinema For Torpedoing Voting Bills Was ‘Absolutely’ Appropriate

What Is White Supremacy?

Jon Chait has a new article about the definition of ‘white supremacy’. It caught my attention when I saw Chait and Adam Serwer of The Atlantic debating Chait’s argument on Twitter.

I wanted to share a few thoughts on the question.

Before doing that, let me try to briefly summarize Chait’s argument. Chait argues that for the last half century the label “white supremacist” has been reserved for political racists who explicitly demand exclusive or dominant power for white people. Today, though, in reaction to Trumpism, the definition has been expanded to include people who play on racial divisions or pander to white supremacists or simply accept the support of white supremacists even if they are not white supremacists themselves. Chait agrees that these different groups are related but warns of the dangers of conflating them all under the single totalizing label. In essence, Chait is saying that this change in the definition of ‘white supremacy’ makes having Donald Trump as President no different from having David Duke as President.

I’m largely on Serwer’s side of this argument. ‘White supremacist’ is a word most of us associate with men demanding ‘white rights’, hurling terrible epithets at black people and creating an atmosphere of violence and menace. But a lot of that is atmospherics and tactics. The real definition has to be something like Serwer’s who suggests a “general definition of white supremacist is someone who believes white people are entitled to political and cultural hegemony.”

That is after all the literal definition, the meaning of the phrase.

But we should recognize that these definitions are being contested because the ground underneath our feet is in fact moving. Those who champion racial justice and equal rights – not just from African-Americans and other non-whites but from all people of color with an intrinsically greater urgency – are fed up with a definitional taxonomy in which lots of people can duck the obloquy merited by their beliefs and actions by simply declining to sign on to them explicitly. I also get Chait’s point, that it may not be productive or accurate to class everyone in these totalizing terms. Donald Trump and Jeff Sessions are definitely different from David Duke. But – and I say this slightly jokingly but mainly in earnest – maybe we should call Sessions and Trump moderate white supremacists and Duke a white supremacist extremist.

But here’s the point that remains undiscussed in this exchange but important.

Supremacy of a sort is a given when you’re the majority, at least in a functioning democracy. Let’s go back almost half a century to 1970. By the definitions that Americans use to define race, the 1970 census found that 89.5% of Americans were white and 10% were black. Hispanics, which under the Census definition can be either white or black, made up 4.5% of the population. In other words, the country was overwhelmingly white and the only numerically significant racial minority was African-Americans. Asians and Hispanics made up a minuscule part of the population and were heavily concentrated in the Pacific West and Southwest. 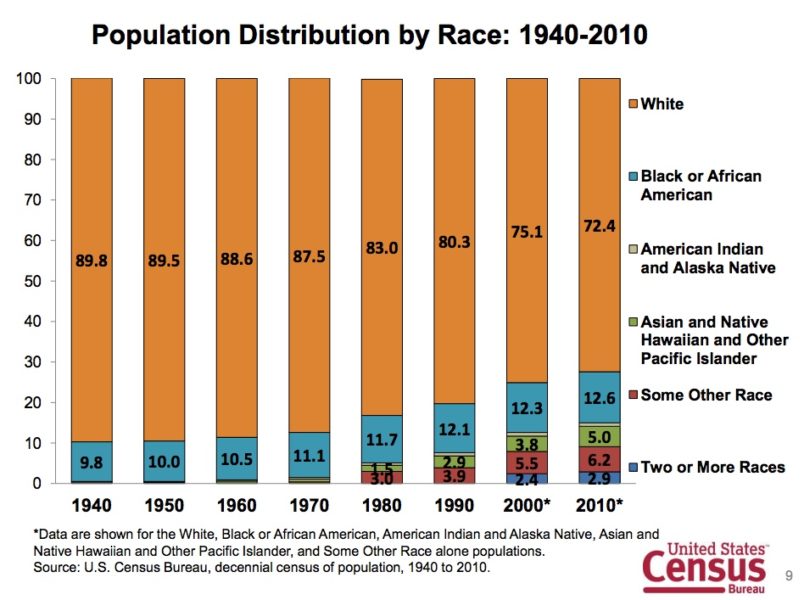 Significant change has occurred even since the 2010 census. This chart is also slightly misleading since Hispanics made up 16.3% of the population in 2010. In this chart, most of them are classed as “white”. Still, even with these caveats, the trend beginning in roughly 1970 is clear and dramatic.

Many people have not fully thought through how today’s dramatically different demography changes the very meaning of ‘white supremacy’. In 1970 a white person could fully support civil rights for African-Americans, oppose every sort of formal and informal bigotry and prejudice. But whites still made up almost 90% of the population. The political, social and cultural dominance of white people was a given regardless of whether you fully dismantled every aspect of white supremacy or not. The simple fact of overwhelming numerical superiority made that so.

To be clear, the difference between this hypothetical post-racist society and the Jim Crow South is vast, really all the difference in the world. But whether or not you would live in a society in which most power and wealth was in the hands of white people was a bridge even the most pro-civil rights white person really did not have to fully cross. In our individual lives, I think we all know that things we do of our own volition feel very different than things we’re forced to do. We’ll do things freely we’d resist if it were forced on us. I think this reality is highly instructive about the politics of race today and how changing American demography has changed it. Accepting or even supporting equal political rights for a small minority of the population – which is frequently referred to precisely by their numerical minority status – is quite different from imagining a world where whites are not a majority at all.

To be clear, the diehard racist whites of 1970 are or would be the diehards of today and the most determined anti-racist whites of 1970 would likely be the same today too. But there’s a vast, fluid and ambiguous middle group. Our definitions of race in America remain fluid. But at least as we define it today, whites will no longer be a majority at all in the relatively near future. Certainly, they won’t be the overwhelming majority able to define and dictate cultural, economic and political power more or less as they choose. That scares a lot of white people. And it can scare people who might have non-white friends and not have any overt antipathy toward non-whites. The changing demography post-1970 has brought the issue of white supremacy far more acutely and unavoidably to the fore than it was in the past. That is a big, big part of what Trumpism is all about.

If being white is a major part of your political and cultural identity, how you think about who you are, there really is a lot to worry about. That’s because being white isn’t really a biological reality, it’s a category in America that means being the dominant and powerful group. Again, that’s what Trumpism is. A white person can’t cease to be white just by willing it. That’s not how it works. But what you see as important, how you identify, has quite a lot to do with whether you see a future where white people are no longer a majority as a threat.

So this is not just a rhetorical or taxonomic question, whether you say you’re a white supremacist or not while you’re supporting white supremacy. Trump exists and the question of white supremacy is right at the surface today because of the demographic tipping point that country stands at. Whether Trump hates people of color or would take away their rights if he could is a mind-reading exercise we could talk about forever. But the fact that he believes in and wants to preserve a country where white people call the shots goes without saying. So maybe it’s not simply that we’re pulling David Duke and Donald Trump into the same definition. Maybe it is that the changes in the country have made the functional difference between the two much less relevant.