5 hours ago
Six Dead, Dozens Injured After Gunman Fires On Fourth Of July Parade From Rooftop

10 hours ago
Trump Lashes Out At Cheney After She Signals Jan. 6 Panel Is Open To Criminal Referrals

1 day ago
Schiff Previews Focus Of Next Jan. 6 Committee Hearing After Hutchinson’s Testimony

To Scare Dems, Trump Threatens to Light Himself On Fire

It now seems clear that next week President Trump plans to provoke a spending showdown that could well lead to a shutdown of the federal government. This is strange for so many reasons. The modern government shutdown goes back to the mid-90s. There were technically government shutdowns in earlier decades. But these were brief spending gaps in the context of on-going negotiations. It didn’t occur to anyone to take the federal government hostage to extort policy changes from political opponents until the advent of the Newt Gingrich Speakership.

Before they become notorious reputational debacles, Gingrich was quite clear about what he was doing. He would shut the government down, break President Bill Clinton’s will with the pressure and bend Clinton to his will and policy dictation. There were two shutdowns under Clinton and the Republican Congress. There was one under President Obama in 2013 and a debt ceiling crisis in 2011 which wasn’t a shutdown but had the same legislative hostage taking dynamics. The one recurring pattern is that shutdowns happen in the context of divided government. To be more specific, they happen when there is a Democratic President and Republicans in control of one or two houses of Congress. It simply never occurred to anyone before now that there would be a shutdown crisis when one party had unified control of the entire government still less that a President whose party controlled Congress would threaten to shut the government down to extort policy concessions from a party that controls nothing.

And yet, here we are.

OMB Director Mick Mulvaney explained the plan on Thursday. The details became clear on Friday. The White House will cut off Obamacare subsidies unless Democrats agree to fund Trump’s Wall.

You may ask, what do the Democrats even have to do with this? The Republicans control everything. Well, they do. And there’s no problem in the House. But this kind of budgetary bill requires a 60 vote threshold in the Senate. That’s where the Democrats come into play. According to Mulvaney, Democrats can have $1 of Obamacare subsidies for every $1 they pony up for the wall. 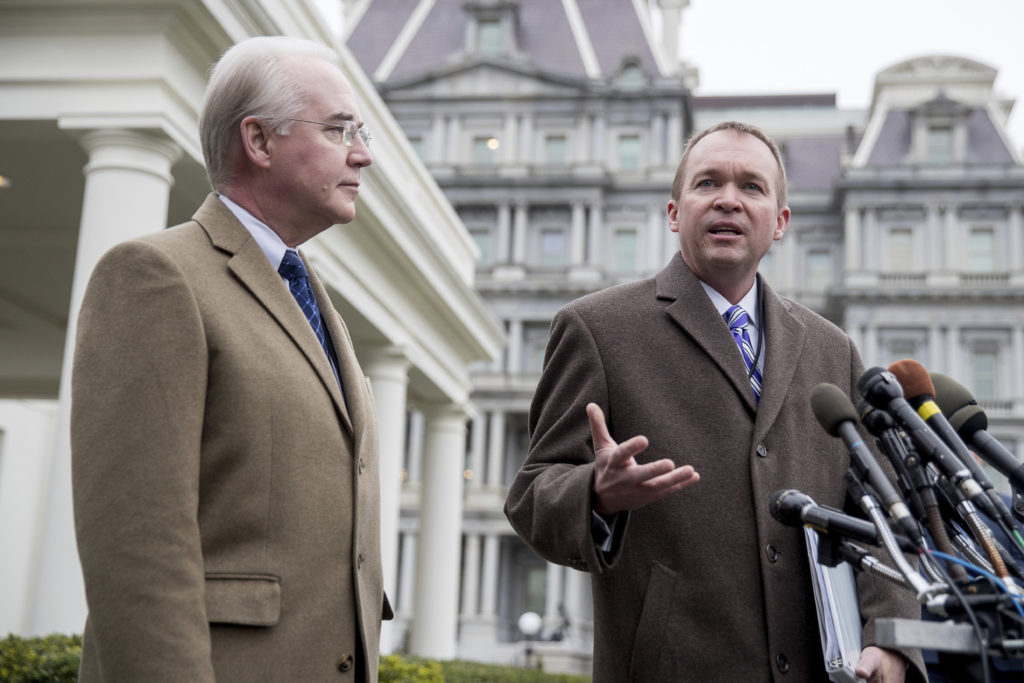 For the moment, let’s observe and pass over the fact that this whole effort has a distinctly mafia feel to it, even down for the dollar for dollar semantics. Legislative hostage taking which appears to have become habitual for Republicans has a certain general logic when it is about budget cutting. But here there’s no apparent opposition to the subsidies. Democrats can have as much of them as they want. As long as they agree to fund Trump’s wall. It’s straight up extortion, without even the pretense of ideological opposition to the policies being threatened.

I very much doubt it.

In conflicts between states, countries tend not to go to war with each other if they are not evenly matched and each side has a realistic and relatively full grasp of each side’s relative power. If the outcome is clear, why go through the death and destruction to arrive at a foregone conclusion? Needless to say, this is far from an absolute rule. There are reasons of honor, national pride, refusal to accept onerous terms, simple misunderstandings, called bluffs and more that lead to conflict. Still, as a general matter, it’s a helpful way to understand how conflicts do or do not arise. When the sides are evenly matched or when the two sides’ relative power is hard to evaluate, there are lots of opportunities for conflict. Because both sides think they may prevail and neither side feels able or inclined to buckle under to avoid a fight it might win.

Perhaps here Trump is simply bluffing. Maybe he’ll get distracted and move on to something else next week. But I get the sense that this is a serious threat. And I get the sense the White House might go through with the threat because I think they believe they are in a strong position even though they’re in a weak position.

The President’s Wall is not popular. For much of the country it is a divisive, bad idea. Even those who do not oppose it per se, do not view it as a high priority. One illustrative data point: a late March AP/NORC poll found that 58 percent opposed new funding for a wall while only 28 percent support it. It’s very unpopular. Notably this is about spending. Remember, “who’s gonna pay for the wall?” Mexico!

So what happened to Mexico paying? Trump continues to pretend that he is somehow compelling Mexico to pay for the wall on some sort of inter-state layaway plan. But clearly this is nonsense. That central premise of the campaign, impose a national humiliation on Mexico by forcing them to pay for a wall on the border is out the door, forgotten. Americans are going to pay for it and it is not popular.

Meanwhile, on the other side of the equation, Obamacare is more popular than it has ever been. Indeed, the failed repeal attempt has made it more popular. The repeal debacle also solidified key elements of how the public sees the law. Popularity of the law called Obamacare has become unfastened from the fate of those who receive care under it.

Let’s discuss what this means.

Obamacare provides coverage for more than 20 million people. Any replacement or change to the law will be and was this spring evaluated in terms of the numbers of people who lost or gained coverage. House Republican arguments about gaining the freedom to lose or abandon your coverage went nowhere. Moderate Republicans and many non-moderates (Tom Cotton, for example) were stung by the public backlash against changes that would lose people coverage. What the White House is threatening is a cut off of subsidies which would destabilize and possibly collapse Obamacare exchanges leading to loss of coverage or higher premiums.

In other words, President Trump is now threatening the Democrats with doing the thing that terrified many Republicans out of repealing Obamacare only a month ago.

We have already seen from the repeal fight that those developments are politically toxic. President Trump and his aides appear to view Obamacare beneficiaries as Democrats’ charges, something akin to family members the President can take hostage and threaten to injure or kill to extort concessions. This is a rather dire miscalculation of the politics of the situation. Democrats have made great political sacrifices to maintain coverage under Obamacare. But the people who are likely to suffer political damage by this action are not Democrats but rather congressional Republicans, indeed Trump himself. After all, that’s why Obamacare repeal went down in flames in the first place. One might say that the eventual harm is to beneficiaries. But there’s little reason for Democrats to think they’d lose this fight. Indeed, a fair analysis of the situation suggests the best way to protect beneficiaries is to call the President’s bluff. After all, they just won basically the same fight a month ago. The simple reality is that the President is threatening to set himself and his party on fire unless Democrats relent.

So, let’s review. The President is demanding Democrats vote funds for his deeply unpopular wall which he promised Mexico would pay for or he’ll try to sabotage Obamacare exchanges in a way likely to damage him and congressional Republicans. This is an almost comically weak political hand. The relative popularity of each policy makes that so. The ruthless and cynical effort to threaten harm to ordinary beneficiaries as a way to extort money for the wall makes it only more so.

But, some Republicans say, now it’s the Democrats who are withholding consent for legislation. They’re shutting the government down! The liberal media has always said its the people in Congress who are at fault.

Here for instance, purported serious person Hugh Hewitt claims that if the Democrats shut down the government it will not only be a disaster for the Democrats but for the press too, which will be exposed for its hypocrisy in always blaming shutdowns on Republicans.

This is really quite silly.

Of course, one can say the President isn’t shutting everything down. He’s simply stating his conditions and if the Democrats refuse, they’re shutting the government down. You can cast the blame any way you want.

But even though you can say either side is doing the deed, the public, not surprisingly, tends to blame the party which orchestrated the stand-off. In every case in the last quarter century, that’s been the GOP, as it is here.

What all of this amounts to is that this is a fight Republicans and the Trump White House will have a very, very hard time winning. But I don’t think President Trump knows that.

Now, the logical question is “Josh, why do you assume they don’t understand what you find so obvious? Are you sure they don’t know something you don’t? Or maybe they know more than you realize?”

Really? C’mon. Can the Trump White House be this legislatively inept? This self-deluding? Of course, they can. It’s an empirical reality we see everyday. It’s how we got to three months into the administration with no major legislation at all getting passed. With any other White House we’d need to posit some grounded strategy. Here positing that goes against really all evidence.

Now, are we going to have a government shutdown. I would say probably not. My colleague David Kurtz reminded me today how many shutdown scares and build-ups we’ve had that didn’t end up happening. Like with Obamacare repeal, maybe they’ll go low energy at the last minute and pull the plug on the whole idea. Maybe Trump will get bored and move on to something else. Maybe – this seems the most likely failsafe – congressional Republicans will refuse to go along realizing it’s a political loser. Apart from the particulars of a shutdown fight, there are many Republicans, particularly in the Senate who don’t like the wall either.

I will simply say that I think a shutdown is more likely than people think for this simple reason. The President has a very weak hand in this confrontation. But he doesn’t seem to know it. That’s a set of circumstances that is bound to lead to trouble.