2 hours ago ago
It’s Official: Michigan GOPers Who Submitted Forged Signatures Are Off The Ballot, For Now

2 hours ago ago
Jordan Demands Jan. 6 Panel Show Him Evidence It Has Collected About Him

This Was Not Normal: Russian Foreign Minister Edition

I wanted to add some context to one of the more surreal moments of this surreal day. Russian Foreign Minister Sergei Lavrov met first with Secretary of State Tillerson and then a short time later with President Trump in the Oval Office.

This is not standard procedure.

One obvious weirdness to this was that the meeting came on the first full day in which Washington was absorbing the shock of President Trump’s firing of James Comey – an evolving scandal which has Trump’s relationship with Russia at its core.  The meeting was oddly timed to say the least. Many also noted that while US press was barred from the meeting, Lavrov was allowed to bring the the Russian state news agency to photograph the event.

All the photos you’ve seen are from Tass.

But there’s something odder about this. 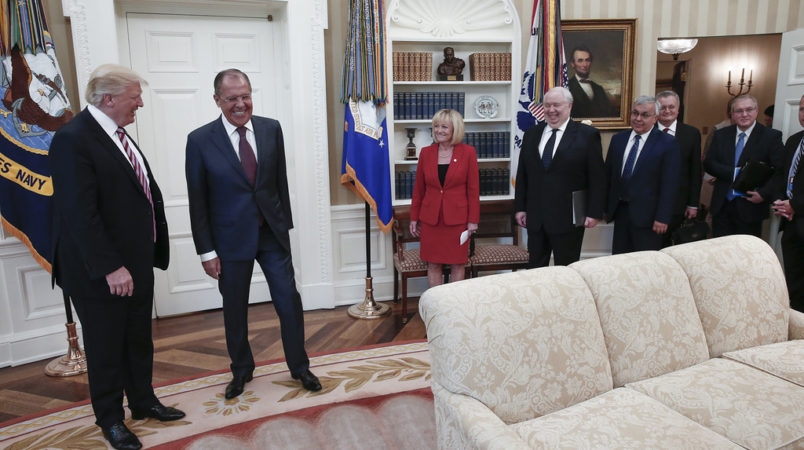 (In this photo it’s Trump, Lavrov, an unidentified woman and Sergei Kislyak, the Russian Ambassador who’s been a focal point of the Trump/Russia story.)

Foreign Ministers don’t usually meet with the President of the United States. I’m not saying it never happens. It does sometimes, especially if its the foreign minister of a major power, which of course Russia is. It also happens when there’s some particular business of importance to be hashed out. But Foreign Ministers generally meet with the Secretary of State, Defense Ministers meet the Defense Secretary, etc. It’s a rather straightforward matter of counterparts, parity and status. A Foreign Minister meeting with the President, particularly a chummy meeting in the Oval Office, is not standard procedure and generally signifies a warmness of relations between the two countries or some specific business to be hashed out.

Now does this matter – standard or not? In a way, no. But in the world we live in, a meeting with the President in the Oval Office is a prize, sort of a bauble for the administration to bestow. When relations are chilly, someone like Lavrov would likely be frozen out.

So why did the President hold this meeting?

According to Susan Glasser, Trump had the meeting because Putin asked and said it was important.

The chummy White House visit—photos of the president yukking it up with Lavrov and Russian Ambassador to the United States Sergey Kislyak were released by the Russian Foreign Ministry since no U.S. press was allowed to cover the visit—had been one of Putin’s asks in his recent phone call with Trump, And indeed the White House acknowledged this to me later Wednesday. “He chose to receive him because Putin asked him to,” a White House spokesman said of Trump’s Lavrov meeting. “Putin did specifically ask on the call when they last talked.”

I’m genuinely unsure what to make of this or rather what to say about it. There’s nothing inherently wrong with this happening. Protocols can be broken. And again, there’s no real rule in any case. President Obama met with Lavrov in the White House in 2013 and had the standard seated in chairs side by side photo shoot. Presidents do favors for foreign leaders as part of the give and take of statecraft. But we’re told that US-Russian relations are at their worst pass since the end of the Cold War. Whatever special bond Trump and Putin had during 2016 has been replaced by icier relations driven by his new top advisors at the Pentagon and the NSC. That’s a bit hard to reconcile with this. It seems like President Trump’s special relationship with Vladimir Putin is 0n-going.