12 hours ago ago
Jan. 6 Panel Seeks Information From GOP Rep Who It Says Gave Tour Day Before Insurrection

The McConnell Corrupt Bargain And The Fallacy of Policy Literalism

Senate Republicans are driving at a breakneck speed to abolish Obamacare and throw more than twenty million people off their health insurance coverage. The damage will be far greater when you figure in the loss of protections for people with pre-existing conditions and those who’ve benefited from various other Obamacare regulations. Senate Republicans’ main weapon in this effort has been total secrecy, which has had the effect of killing debate and discussion since there’s actually nothing concrete – no specific CBO score or legislative text or even outline – to discuss.

This, frankly, is silly.

We almost certainly know the gist of the impact of this bill, when we figure the political and budgetary parameters Senate Republicans are operating in and the eventual need to pass a bill that emerges from a conference committee through both houses of Congress.

McConnell is taking shrewd advantage of the particular hang-ups and thought processes of most Democrats and many journalists, how they get tangled up in policy literalism and boxed out of being able to speak clearly about the political reality that is coming. To be more specific, even if they don’t quite get that this is happening, many Democrats think that there’s nothing to discuss or attack since we don’t know the fine print of the legislation despite the fact that its broad scope and impact are clear. 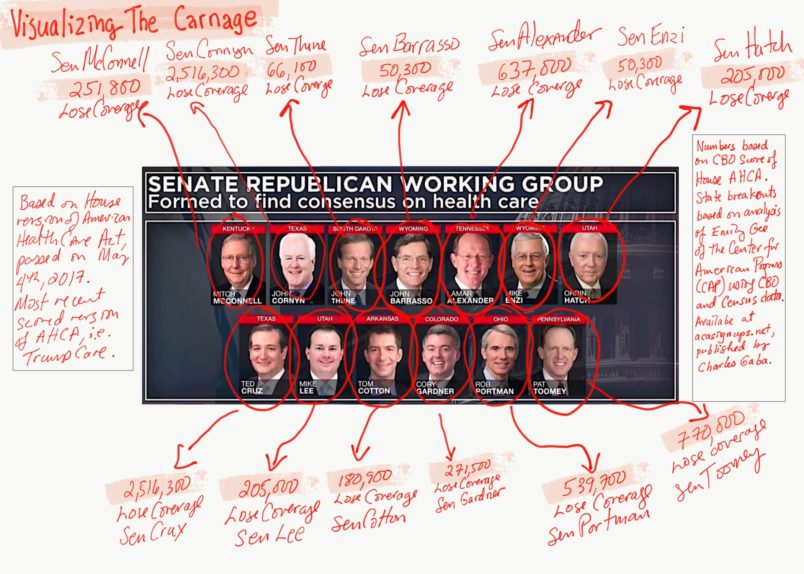 To look at this from another perspective, do you think if Democrats were on the verge of passing a bill, the outlines and impact of which were clear, but were keeping the legislative text secret that Republicans would be finding themselves hamstrung about raising a public stink about the bill? Of course not. Indeed, they’d be death paneling it on top of whatever was actually true about the legislation. Caring about policy, caring about the lives of people affected by legislative decision is a good thing – it’s critical to democratic self-government. But it has the byproduct or side-effect of policy literalism which is politically catastrophic. I say ‘politically’ both in the sense of winning political fights but also in the more general sense of allowing political debates in which citizens have concrete factual information upon which to make decisions. The first is only relevant to partisans; the second is highly relevant for journalists too.

Or, to come at it from yet another vantage point, let’s go back to the the up and down history of the House version of Trumpcare. It was bumpy all along but the wheels only really came off when the CBO released its score of the first version of the bill which showed that 24 million people would lose their coverage over the next handful of years. That eventually killed (or seemed to kill) the legislation. This fact should be a wake-up call about the nature of the coverage of this drama. What was really all but certain only gained political traction or became real in the debate after it became ‘official’ with a CBO score and journalists and partisans had specific numbers to capture what was happening. That fact should be an important reminder for everyone.

When House Republicans went back to it in April they certainly had this in mind and took a different approach. They simply refused to allow a CBO score prior to the vote, knowing from experience how this would significantly stifle debate over a deeply unpopular bill. Doing this allowed House Republicans to do something very specific: They both insisted that the bill had been scored (the first version, not the one they were voting on) but also used the lack of a CBO score as a shield to attack anyone who invoked the 24 million number. It was the best of both worlds, if we define “best” as facilitating taking away people’s health care and hobbling a public debate over the same.

In the event, when a score for the second bill was finally released, it had almost exactly the same amount with lost coverage as the first bill – 23 million and change versus 24 million. The Senate bill will likely differ more from the House bill than the two House bill’s differed from each other. But the net effect, the impact, will almost certainly be comparable. You can move numbers around on the spreadsheet, give folks another year here or there before you take away their insurance. But at the end of the day, if you remove the funding mechanism (necessary to provide the big tax cut for the super wealthy) and the key regulations and Medicaid expansion, the final numbers perforce have to be very close to the same. Health care policy isn’t simple. It’s also not rocket science. But to use the model of rocket science, if you remove the rocket engine, the rocket won’t take off. It’s not that complicated.

As a political matter, Democrats should be shouting from the rooftops about McConnell’s secrecy. But they should also be hitting what we know, what is really all but certain: that the net effect of this bill will be to deprive tens of millions of Americans of the coverage they currently have – whether that’s because of the loss of market subsidies, Medicaid expansion or because of the curtailment of regulations which allowed various classes of individuals to purchase coverage at realistic rates.

On the extremely notional off chance that Senate Republicans are inexplicably keeping secret a plan that does something different, it is really on them to let everyone know. Journalists should not let McConnell’s secrecy prevent them from providing clarity to readers about the impact of what is coming. Opponents of Trumpcare, who obviously operate from a very different set of priorities and equities, should also not hobble themselves.