By Josh Marshall
|
March 18, 2020 12:15 p.m.
EDITORS' NOTE: TPM is making our COVID-19 coverage free to all readers during this national health crisis. If you’d like to support TPM's reporters, editors and staff, the best way to do so is to become a member.

I want to be clear and tentative here. In a situation of mass outbreak and spotty testing capacity you have to be very cautious interpreting numbers. But there seem to be some possible signs that the outbreak in Italy is beginning to crest. And to be clear, by ‘crest’ here I mean a possible stabilization of the number of new cases reported each day. More than 3,200 new infections in the country have been reported every day for the last four days. So each day the situation is getting much worse. It is simply that the acceleration may be slowing down. Again, very tentative. You can see the daily number went up from the 16th to the 17th. But it looks like there may be some deceleration – the generally flat point on the graph after a couple weeks of close to a 45% angle of ascent.

One point to note is that the clampdown in the north began on March 8th. If this apparent deceleration persists it would mean the effect of the clampdown took about one week to show up in the numbers, a relationship which would be consistent with what we know about the median incubation period of the disease.

The clampdown in Wuhan began on January 23rd and the peak was on February 4th. (As we’ve noted, that huge spike in mid-February appears to have been an artifact of changed testing methodology. In terms of the trend February 4th seems like a good anchor point.) 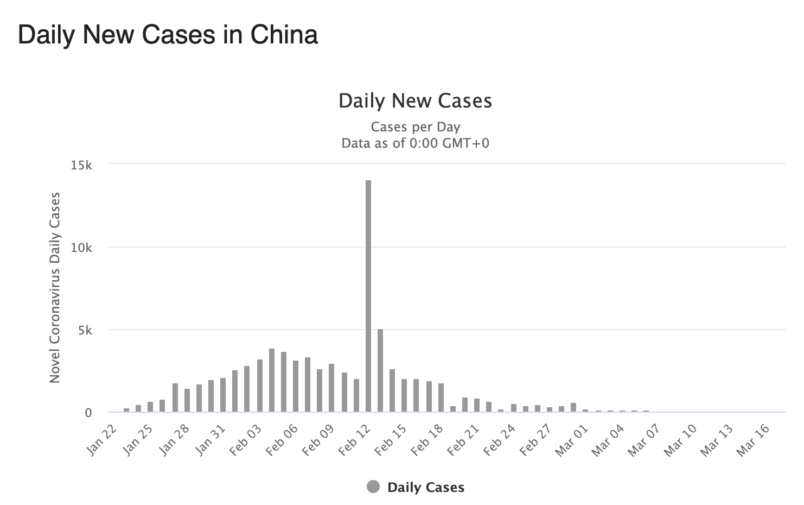 There’s a similar ten day interval in South Korea. But the comparisons mna are entirely comparable since the interplay of testing and social distancing clampdowns is different.

It should also go without saying that ‘progress’ here only means a very specific interplay of numbers. The situation on the ground remains horrifying in northern Italy. The total number of infections in the country is approaching half the total infections in China – ~30k vs ~80k. The number of daily new infections is close to what it was at the height of the Wuhan outbreak. And the death total is already over 2/3rds what is has reached in all of China.