How Facebook Punked and then Gut Punched the News Biz

In the digital publishing world, there’s been a buzz about this article in Slate in which slate staffer Will Oremus detailed the impact on the publication of Facebook’s dramatic retreat from the news business. The numbers are stark but not surprising for people in the industry. Indeed, Oremus makes the point that most news organizations are not willing to release these numbers. (We’ll come back to that point in a moment.) In January 2017 Slate had 28.33 million referrals from Facebook to Slate. By last month that number had dropped to 3.63 million. In other words, a near total collapse.

One of the benefits of being a small, independent news outlet that I run is that I’m happy to share these numbers. And I don’t need to ask anyone’s permission.

These are numbers from the audience statistics service Parsely from January 2017 until today. I include these because this is the same service and time range that SLATE published. So you can get an exact apples to apples comparison. 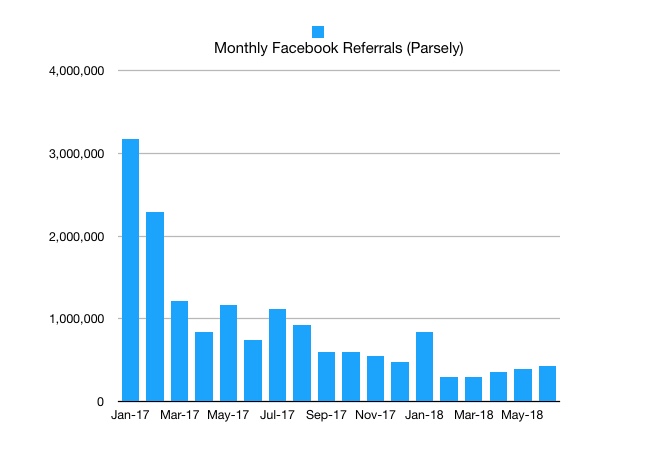 Here’s the same statistics – monthly referral traffic from Facebook – going back to January 2016 from Google Analytics. 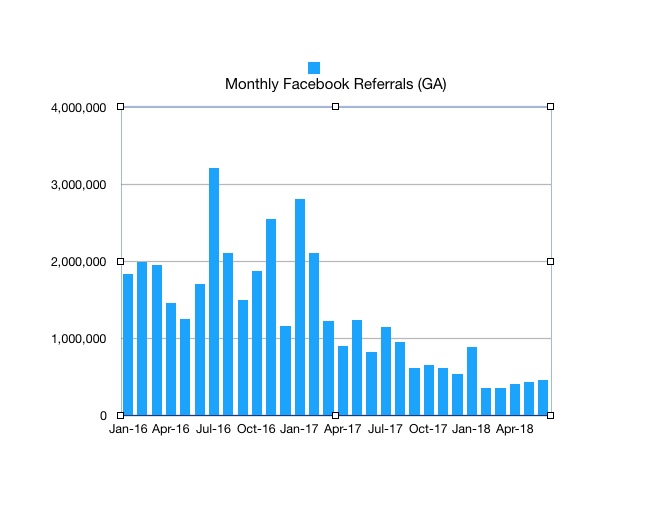 There are two points to consider in these numbers – one has to do specifically with the health and audience of TPM, another has a broader application because it may show a clearer measure of what we might call organic decline.

Let me explain both points.

First, the collapse of Facebook traffic is a development for which TPM was very well positioned. We never relied that much on social media traffic or really anything but actual audience, by which I mean, people who visited our site each day because they wanted to visit TPM. This isn’t to say that social distribution was irrelevant to us or that we were somehow above it. Far from it. It was simply never a major organizational focus or a major source of traffic. We didn’t shape publishing or editorial strategy around it. Critically, we never spent money on it. We never bought traffic via social networks. Nor did we do so indirectly by purchasing or hiring services to drive social traffic. All of that means that when the collapse came what was brutal or even lethal for other publishers was an annoyance or bump in the road to us.

I would estimate that in page view terms all social traffic never accounted – for any significant period of time – for more than 10% of total traffic. Our total social network traffic is down from the highs of 2016 and early 2017. But not that much. Indeed, if you go back to the Spring of 2015, our total social platform numbers are close to identical to what they were in the Spring of 2018. The difference is that in 2015 Facebook was the biggest source of social referrals and delivered roughly five times as much as the next runner up, Twitter. Today Twitter comes in first and it delivers more than twice as many visits as Facebook.

The point about buying traffic goes to the second point. As SLATE makes clear in their article (with admirable transparency), one of their key sources of traffic was buying it. As part of their retreat from news publishing, Facebook has outlawed or disrupted a number of those ways of buying traffic. We’ve never done any of that. Again, this is not some moral statement. As much as anything else, it’s because we simply didn’t and don’t have the money to do stuff like that. My point in focusing on this is that our social strategy for Facebook has really never been more than having a page and posting on stories to Facebook. So the drop shows the drop off in traffic referral from Facebook in a fairly organic way, rather than with the complication of various ways of purchasing traffic and the different ways Facebook has disrupted doing so.

What does this all mean?

The first should be obvious: you can’t build businesses around a company as unreliable and poorly run as Facebook. Only a year ago, when I would talk to big money players in the digital media world, there was a consistent refrain: social video on Facebook, that’s the whole game. That struck me as crazy at the time, given everything we were seeing in the industry. And it was crazy. There’s no news publisher entitlement to Facebook traffic. And Facebook is a highly unreliable company. We’ve seen this pattern repeat itself a number of times over the course of company’s history: its scale allows it to create whole industries around it depending on its latest plan or product or gambit. But again and again, with little warning it abandons and destroys those businesses.

I have often been critical of Google. But Google operates very, very differently. It has built massive businesses in advertising and other media related fields. It clearly exercises monopolistic power. But its presence, business models and partnerships are much more consistent and reliable. Facebook and Google have both engrossed huge swathes of the advertising business. Yet TPM gets a mid-low 5-figure check from Google every month for the ads we run on TPM through their advertising services. We get nothing from Facebook. And though there are now some exceptions, that’s the standard. Facebook will sometimes jump in with offers of money and when they decide differently jump right back out. So for instance: April 21, 2017 “Facebook is offering publishers money to create produced video” … December 13th, 2017 “Facebook plans to stop paying publishers to make news feed videos“. Despite being one of the largest and most profitable companies in the world Facebook still has a lot of the personality of a college student run operation, with short attention spans, erratic course corrections and an almost total indifference to the externalities of its behavior.

The other point is about audience. As I wrote late last year we have been and remain in the midst of a crash in digital media. But growing out of that crash we are also seeing a shift from a digital media age of scale to one based on audience. As with most things in life, bigger is, all things being equal, better. But the size of a publication has no necessary connection to its profitability or viability. The focus on scale was largely a brought over from the tech industry, both in funding models and business models. But the tech model of scale in which you grow rapidly and create network or path dependence, buy or destroy other entrants and then extract monopoly or robustly defensible rents doesn’t really work in media. Lots of biggest digital media successes and behemoths you’re familiar with have never made money and never will.

Being a small independent publisher is never easy. It’s a bit like being a small proto-mammal (think a ferret or small rodent or perhaps a pygmy marmoset) in the late dinosaur age: rapid movement, lots of hyper-vigilance and stay lucky because someone may step on you. But in many ways the audience era is vastly better for us than the scale era, even though recent years have been some of the most challenging in the company’s history. In the scale era, the most distinguishing fact about our publication, a dedicated and devoted audience of years’ standing, was in business terms largely irrelevant. In the audience era, it’s everything. We have faced all the challenges on the advertising front as other digital publishers. Likely more. But we’ve been able to survive and even modestly thrive by rapidly building a subscription business. That is all about true audience – not just eyeballs or clicks or what is really just distribution but audience – and the fact that we got started on making the shift early.

Facebook’s weird but telling indifference to the effects of its actions on other members of the ecosystem in which it operates – so much on display in the ‘fake news’ and Cambridge Analytica stories – is just as visible in these core business practices. Publishers were desperate and often stupid and Facebook took that desperation, used them up and spit them out. Google may be like the borg, unstoppable and unforgiving. But there are the implants, which are well-made, and a decent community and on-going growth. Facebook is pure predatory.