9 hours ago ago
It’s Official: Michigan GOPers Who Submitted Forged Signatures Are Off The Ballot, For Now

9 hours ago ago
Jordan Demands Jan. 6 Panel Show Him Evidence It Has Collected About Him

Guess What: South Koreans Are Furious at Prez Trump

Let’s stop for a moment and note that President Trump and his skeletal foreign policy team have accomplished the fairly difficult feat of deeply alienating South Koreans (and seemingly many Japanese as well) while notionally protecting them from the threat of a militaristic and aggressive North Korea.

As the AP noted here yesterday, countries in the region are looking at Trump as, to quote the AP, “Unpredictable. Unhinged. Dangerous.” Consider that this is in a confrontation with Kim Jong-un. North Korea under the Kim dynasty has specialized in extremely provocative, high risk gambits. Thirty four years ago, they blew up several members of the South Korean cabinet in a bomb attack in Rangoon. Kim Jong-un apparently just had his half brother killed in a poison attack in Kuala Lumpur. Trump has strong competition in the unpredictable and unhinged and dangerous department.

But what’s really driving anxiety and anger is this issue with the confusion over the whereabouts of the Carl Vinson and its carrier strike group. As I argued yesterday (and as I think is consensus opinion), the false impression seems to have been more a matter of internal confusion than intentional deception. But the South Korean press and public seems to see it very differently. Headlines in South Korea are saying that Trump lied and as this article in the Times put it, “South Koreans feel cheated after U.S. Carrier Miscue.”

Of all Trump goofs and scandals, this seems to be one of the more innocent ones in terms of intent. Maybe we’ll learn otherwise but I don’t think this was intentional. But when you’re talking tough and getting into stand offs over nuclear weapons and ballistic missiles and a major global city vulnerable to overwhelming artillery fire, you’ve got to have your shit together. You need clarity about what you’re doing and you need to be know what you’re doing and appear to know what you’re doing. Deception is an inherent part of military affairs. Strategic ambiguity is too. But if you’re going to be bluff or deceive, you need to make sure people think you were doing it on purpose. Small errors and confusions can have very, very big consequences. We can parse different quotes from the White House and Pentagon and see how the confusion arose. But step back. When you find out that the global hegemon ‘said’ its ships were in one place when they were actually thousands of miles away, that seems either weirdly duplicitous or stupid in a way that invites mockery or fear.

On Wednesday, after it was revealed that the carrier strike group was actually thousands of miles away and had been heading in the opposite direction, toward the Indian Ocean, South Koreans felt bewildered, cheated and manipulated by the United States, their country’s most important ally.

“Trump’s lie over the Carl Vinson,” read a headline on the website of the newspaper JoongAng Ilbo on Wednesday. “Xi Jinping and Putin must have had a good jeer over this one.”

“Like North Korea, which is often accused of displaying fake missiles during military parades, is the United States, too, now employing ‘bluffing’ as its North Korea policy?” the article asked.

Then there’s this from the political front …

“The 50 million South Koreans, as well as many common-sensical people around the world, cannot help but feel embarrassed and shocked,” said Youn Kwan-suk, spokesman of the main opposition Democratic Party, which is leading in voter surveys before the May 9 presidential election.

The quote from the Democratic Party spokesman centers not just on the Carl Vinson goof but a statement from President Trump claiming that Korea “used to be part of China.” The quote actually comes from the full quote version of his description of that ‘nobody could have known how complicated Korea could be’ exchange he had with President Xi of China at Mar a Lago. Quoting the President from his interview with the Wall Street Journal …

He then went into the history of China and Korea. Not North Korea, Korea. And you know, you’re talking about thousands of years …and many wars. And Korea actually used to be a part of China. And after listening for 10 minutes I realized that not — it’s not so easy. You know I felt pretty strongly that they have — that they had a tremendous power over China. I actually do think they do have an economic power, and they have certainly a border power to an extent, but they also — a lot of goods come in. But it’s not what you would think. It’s not what you would think.

To get the full picture of what happened here, it’s important to understand that the reports of the carrier group returning to Korean waters stirred pretty intense anxiety in the first place. That doesn’t mean it was a good or bad idea. Stand-offs provoke tension even when they’re necessary and well-thought-out. But people in the region seemed to be more afraid of precipitous action from President Trump than North Korea – already a bad sign. Finding out that the US either lied or miscommunicated internally about where its ships even were just adds more fuel to the fire.

At the moment, there seems to be an active debate in the region about whether the deception was intentional and whether the US’s two key regional allies were in on it.

As one Japanese expert quoted in the Times puts it, “When it comes to matters that concern Japan, the two militaries communicate essentially in real time.” Given the depth of the US-Japan security relationship, it would be hard to believe this isn’t the case. (Hard for me to believe it’s not the same in the US-ROK (South Korea) military to military relationship.) This same expert argued that by letting the misconception persist, the Japanese were in essence cooperating with the US deception aimed at overawing the North Koreans – one that in a narrow sense may actually have worked. But this means or seems to mean that the Japanese and South Koreans were tacitly furthering a US deception or misdirection – not realizing that it wasn’t so much a deception on the US part as simply a confusion within the US government. As another Japan expert, Narushige Michishita at the National Graduate Institute for Policy Studies in Tokyo puts it with some understatement: “Whatever the case, whether it was deliberate misinformation or a miscommunication between the Pentagon and the White House, it’s quite serious. It undermines the credibility of U.S. leadership.”

Just as a point of perspective, here’s the online front page of The Korea Times, an English language Korean news publication, that I just grabbed as I was writing. 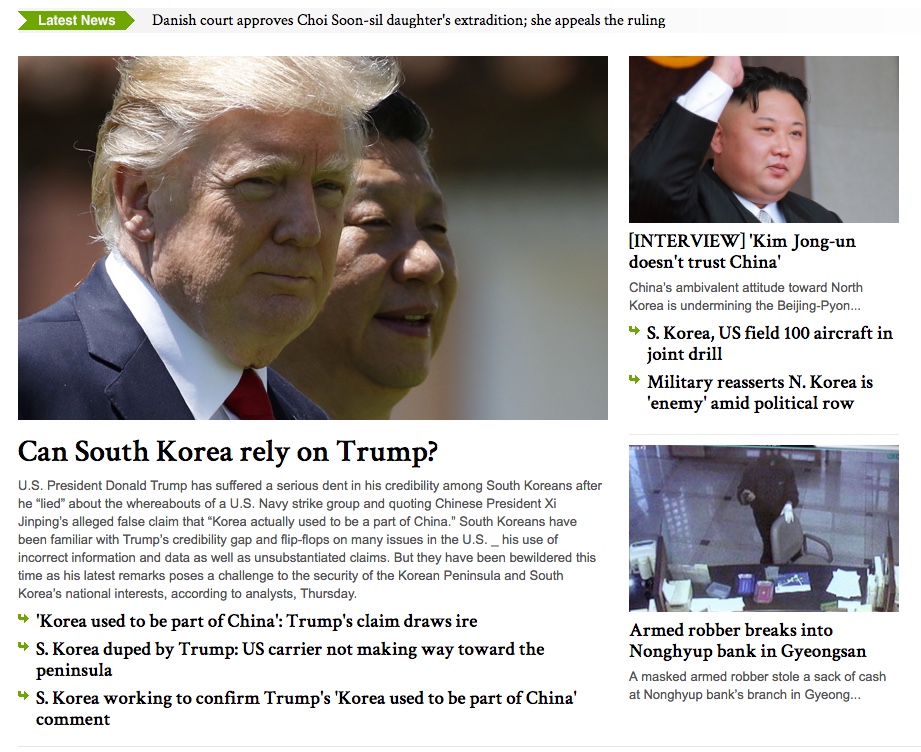 International misunderstandings happen. It is always surprising to see, even in the gravest historical crises, how much of a role chance and accident play in outcomes, sometimes tragic outcomes. That said, this is the kind of stuff that happens when you have a clown serving as President, large numbers of top position at the key departments unfilled and a climate of back-stabbing and organizational chaos.

[Did you enjoy reading this post? Considering supporting TPM by subscribing to Prime.]