11 hours ago
In Attempt To Clear Up GOP Stance On Spending Cuts, Roy Declares Military Should Be ‘Killing People And Blowing Stuff Up’

Feel The Propaganda, Feel the Hate

We’re familiar with President Trump’s dystopian vision of an America in chaos, preyed on by foreigners and awash in citizens violated by feral criminals and “illegals.” Through last year’s campaign and into this year, Trump has repeatedly lied about the national crime rate, murder rates and much more. Here though is a case where anti-immigrant policies continue to be justified by at least deliberately misleading statements and what can only be called incitement.

Additionally, many of these jurisdictions are also crumbling under the weight of illegal immigration and violent crime. The number of murders in Chicago has skyrocketed, rising more than 50 percent from the 2015 levels. New York City continues to see gang murder after gang murder, the predictable consequence of the city’s “soft on crime” stance. And just several weeks ago in California’s Bay Area, after a raid captured 11 MS-13 members on charges including murder, extortion and drug trafficking, city officials seemed more concerned with reassuring illegal immigrants that the raid was unrelated to immigration than with warning other MS-13 members that they were next.

The second highlighted sentence doesn’t explicitly say the murder rate continues to rise in New York City. But that is certainly the intended impression, along with the dig at ‘soft on crime’ policies.

But as Professor John Pfaff of Fordham Law School noted on Twitter, precisely the opposite is the case. 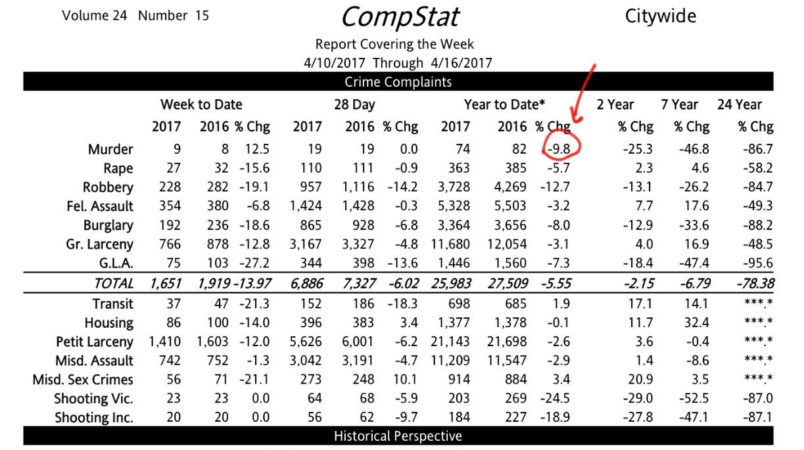 As many of us noted last year, you cannot infer a trend from a single year. And this chart covers little more than a quarter of a single year. But New York City is and has been for years the safest big city in America. Over this relatively brief period, the murder rate is actually down significantly. Crime over all is down too.

There’s not much more to say. If this were one deception it might be dismissed. But of course it is not. It is a single illustrative example of deception as policy, one peep in a symphony of lies that President Trump, Attorney General Sessions and all their fellow travelers and appointees use regularly to sell their anti-immigrant crackdown and attempt to return to the ‘tough on crime’ policies of the past.