You’ve probably heard that the Kushner family was caught over the weekend literally selling visas to immigrate to the United States in exchange for funding a $150 million dollar New Jersey real estate project. The sale itself is actually legal. It’s part of a highly controversial and widely abused program which provides visas to foreign nationals in exchange for $500,000 investments in US projects which by certain standards are judged to create jobs in impoverished or economically distressed parts of the United States. It’s become a widely abused vehicle for real estate developers looking to fund luxury development projects.

Setting that controversy aside, what sets this apart of course is that Jared Kushner is the most senior advisor to the President of the United States, as well as being the President’s son-in-law. While nominally stepping aside from his family business, his family is in China openly trading on the Kushner family’s ties to President Trump to rake up money. As much and as quickly as possible. Kushner’s sister Nicole actually led the presentation. Reporters from the Times and the Post were on hand at the presentation in Beijing (where they were able to get in) and at a second in Shanghai (where they weren’t.)

Trump – as well as the Kushner family’s connection to him – was explicitly invoked as the “key decision maker” in getting the visas. A Times reporter posted this picture of  the presentation to Twitter, which I’ve marked up to identify the people  in the slide … 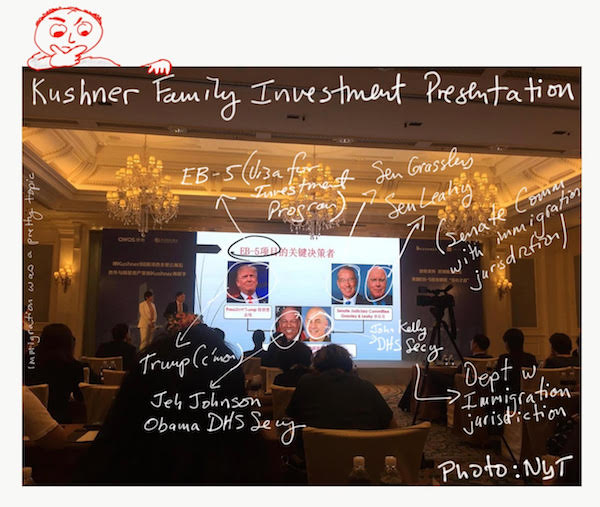 This is needless to say, the most open and flagrant kind of monetizing of the Presidency – as bad as anyone could have imagined from the conjoined Trump/Kushner families. The fact that this ‘nationalist’, ‘crack down on illegal immigration’ White House is connected to cash for visas activities like this just adds a layer of oily crust to the corruption.

The most important part of this story, however, is what’s not stated. The Post and the Times caught wind of this event and sent reporters. Do we think this is the only case of the Trump and Kushner families doing this? I think we can fairly assume that the effort to cash in is underway and in overdrive in numerous countries around the world and in every way possible. We see hints and shreds of evidence popping up – Ivanka Trump securing numerous trademarks for her company in China. Even more revealing, many of the hints emerge first in the foreign press or by chance in indiscreet bragging on social media. This tells us that the US press is hard pressed to monitor it – understandably, it’s a large world!  With zero disclosure, private meetings and a whole world to rake money, inevitably most of it is taking place outside of our view.

It will likely be years, perhaps decades, until we learn the full story.