Over the weekend, Congress allowed funding for the Children’s Health Insurance Program (CHIP), which covers nearly 9 million children in low-income families, to lapse—failing to pass a reauthorization by Saturday’s deadline after spending most of the year attempting to repeal the Affordable Care Act.

The expiration of the program will not affect all states equally. Some are already scrambling to move money around to make sure no child sees their coverage lapse while others have a healthy amount in reserves that will last them well into next year if Congress does not act.

Though the Senate will hold a markup on the reauthorization on Wednesday, its passage remains uncertain. The House has not yet unveiled its version of the bill, and a House Democratic aide told TPM that while negotiations are ongoing, the parties are still fighting over whether to maintain the same level of the federal funding match for CHIP and whether to require cuts to other parts of the federal budget to offset CHIP’s cost.

“We have yet to reach an agreement,” the aide said. “It’s pretty upsetting that the time tradeoff has been an effort to repeal the Affordable Care Act.”

According to an analysis by the Kaiser Family Foundation, 48 of 50 states, including DC, assumed Congress would reauthorize CHIP when they wrote their 2018 state budgets. That mistaken trust in Congress is already having major consequences.

Joan Alker, the executive director of the Georgetown University Center for Children and Families and an expert on CHIP, told TPM that the severity depends on how long lawmakers drag their feet.

“If Congress can get it done in the next couple weeks, we could avoid some of the worst consequences,” she said. “It’s hard to disentangle what the consequences will be, but we will certainly start seeing them in November.” 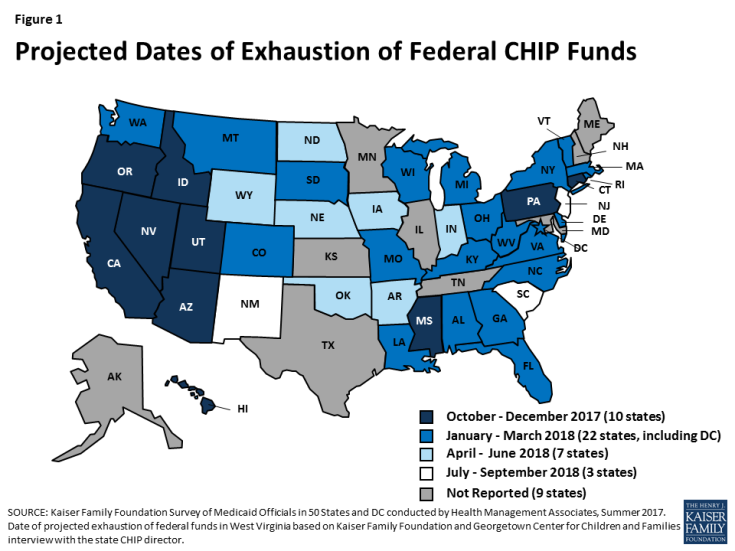 Some states have laws on the books that would force them cap enrollment or end health coverage for the CHIP population altogether if federal funding lapses. Others are anticipating cuts to other CHIP-funded programs, including coverage for low-income pregnant women and children.

Without knowing when Congress will act, Alker says several states are torn about whether to send out notices to families warning that coverage could be cut off or enrollment frozen.

“States only have bad choices here. They don’t want to alarm families but at some point they have to act,” she explained. “Congress has been talking all year about taking away health coverage from families, so if a family gets a notice that says, ‘Your coverage may be taken away,’ there are many reasons for them to think it’s a strong possibility. It is all very bad news.”

Here are the states that may be hit the hardest:

Utah’s senior Republican senator Orrin Hatch (pictured above whispering with Senate Majority Leader Mitch McConnell) chairs the committee in charge of funding CHIP. He told reporters last week that the program will be reauthorized “shortly,” but that will not be soon enough for his struggling state. Utah officials have said that they will run out of funding by the end of the year and are making plans to close the program, impacting upwards of 20,000 children.

The commissioner of Minnesota’s Department of Human Services, Emily Piper, told her congressional delegation in September that without renewed federal funding, she will have to take “extraordinary measures” to prevent people from being kicked off of CHIP.

“The pregnant women covered by CHIP would be at risk of losing coverage altogether,” she wrote. “However, we are exploring ways to continue coverage temporarily by carrying over FY 2017 CHIP funds so that their prenatal and postpartum care continues uninterrupted. This action, however, comes with a significant financial penalty.”

That penalty, she estimates, will be a $10 million hit to the state’s general fund.

Arizona’s CHIP funding, which provides coverage for more than 22,000 children, will run out by the end of the year if Congress does not pass a bill. Because the state passed a bill in 2016 that would force its CHIP program to halt new enrollment if the federal government eliminates funding, the state is already warning health insurers and families that they may implement an enrollment freeze.

The last time this happened, during the Great Recession in 2009, the rate of uninsured children in Arizona climbed sharply.

Texas, which temporarily waived the fees families have to pay for CHIP in the wake of Hurricane Harvey, could burn through its budget sooner than projected, threatening health insurance for 390,000 children.

State law requires West Virginia to shut down its CHIP program if federal funding levels drop by a certain amount. They are currently scrambling to get a legal interpretation of whether that means this week or when the state exhausts its reserve funding in early 2018.

The state expects that about one-third of children enrolled in CHIP would become uninsured with closure of the program, unable to enroll either in a parent’s employee insurance plan or on the individual market.

Should Congress’ inaction continue, Nevada is preparing to freeze enrollment on Nov. 1 and end coverage altogether on Nov. 30 for about 27,000 children.

“We’d have to look at our options for limiting the services that are available,” Nevada’s deputy administrator for Medicaid Cody Phinney told the Las Vegas Review-Journal.

“If Congress does not quickly reauthorize CHIP, states like Nevada will need to either send notices of termination to program beneficiaries or develop alternative funding,” Gov. Brian Sandoval (R) warned in a statement.

The state legislature has not yet called a special session to plan for the potential shortfall.