The Republican Party of Virginia on Wednesday attacked the Democratic candidate for governor, Lt. Gov. Ralph Northam, for calling for the removal of Confederate statues from public spaces and their relocation into museums.

In two tweets the state GOP said that Northam was betraying his “heritage” by backing the removal of statues that represent slavery. The Democratic candidate had found out in recent months that his ancestors, who were farmers on Virginia’s Eastern Shore, owned slaves. 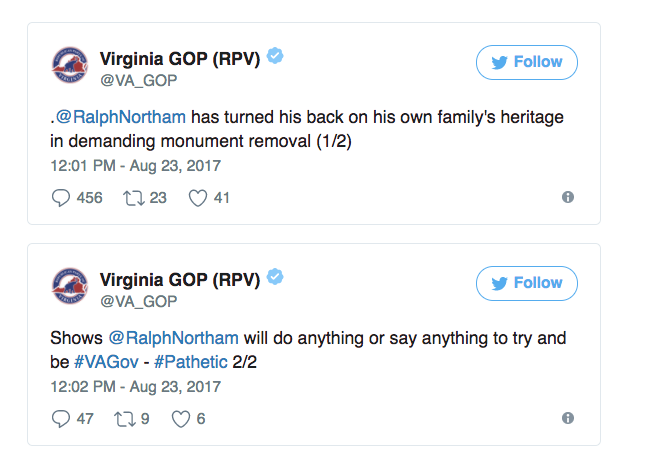 When Northam discovered the part his own family played in the history of slavery in June, he told the Richmond Times-Dispatch that the revelation “disturbs and saddens me.”

I feel fine about turning my back on white supremacy. How does @EdWGillespie feel about the president's position? https://t.co/zhx2nWCGpH

The Virginia GOP took down the tweets hours after they were posted and apologized, saying they were “interpreted in a way we never intended.”

Our previous tweets were interpreted in a way we never intended. We apologize and reiterate our denunciation of racism in all forms.

In the wake of the racist violence earlier this month in Charlottesville, Virginia, and President Donald Trump’s subsequent failure to swiftly condemn white nationalists, politicians in both parties have called for the removal of Confederate statues from public spaces.

Northam joined this chorus last week, despite previously taking the position that Confederate statue removal was a local issue.

“I support City of Charlottesville’s decision to remove the Robert E. Lee statue. I believe these statues should be taken down and moved into museums,” he said in a statement. “As governor, I am going to be a vocal advocate for that approach and work with localities on this issue.”

Northam’s Republican opponent, Ed Gillespie, believes that Confederate monuments should remain, but that local governments should be able to decide whether to remove them.

“I believe that decisions about historical statues are best made at the local level, but they should stay and be placed in historical context,” Gillespie said last week.

A Gillespie campaign spokesperson said in a statement that the Virginia GOP was right to take down its tweets.

“Though Ed disagrees with the Lieutenant Governor on the issue of statues, he knows we can disagree on issues like this without devolving into divisive rhetoric,” the statement read.