It’s the largest one-year increase in the uninsured population since Gallup-Sharecare began the survey in 2008.

The study noted “several factors” swelling the ranks of the uninsured, from increased premiums caused by insurance companies dropping out of the individual market to uncertainty around whether the Trump administration would enforce the individual mandate’s penalty for forgoing health insurance. Exacerbating both factors, the GOP-controlled Congress repealed the individual mandate in December, which is expected to hike premiums by an additional 10 percent or more.

Premiums also went up significantly in 2017 when the Trump administration cut off cost-sharing reduction payments to insurance companies, though the vast majority of people on the individual market were shielded from the increase by a bump in their federal tax credits.

Though the uninsured rate remains well below the high of 18 percent—the year before the Affordable Care Act went into effect—the increase in 2017 is the first reversal of several years of decline. And Gallup-Sharecare predict that the trend will continue, with more people dropping or losing their insurance coverage in the years to come. 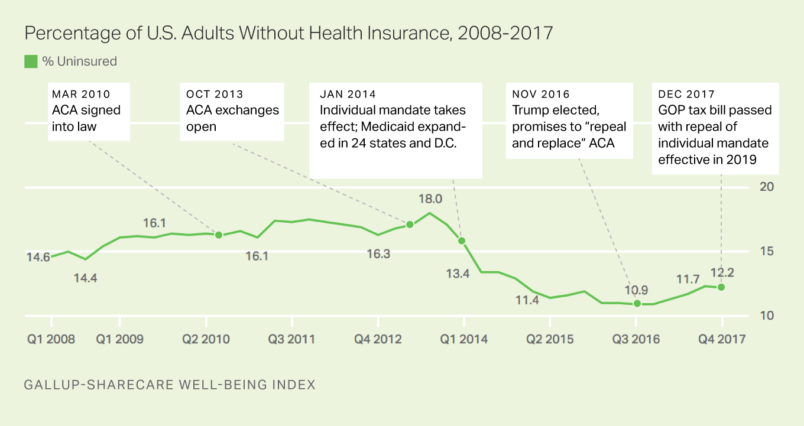 Gallup and Sharecare report that while all demographic groups saw a bump in the uninsured rate, it increased most among young adults, blacks, Hispanics and low-income Americans.

Former officials at the Department of Health and Human Services have told TPM that these are the groups for whom outreach is the most important, and the groups most likely to be impacted by the decision to cut 90 percent of the outreach budget for the first full open enrollment period of the Trump administration. The administration additionally severed partnerships with dozens of Latino advocacy groups that for years worked on outreach and enrollment, partnerships that contributed to 4 million Latinos gaining coverage since the launch of the Affordable Care Act.

Most troublingly, the uninsured rate among Americans younger than 25 jumped the most, a full 2 percent, making the overall insurance pool older and more expensive for those who remain. When the individual mandate is fully repealed in 2019, even more younger and healthier enrollees are expected to drop out, putting the future stability of the health insurance exchanges at risk.

Alice Ollstein (@AliceOllstein)  was a reporter at Talking Points Memo, covering national politics. She graduated from Oberlin College in 2010 and has been reporting in DC ever since, covering the Supreme Court, Congress and national elections for TV, radio, print, and online outlets. Her work has aired on Free Speech Radio News, All Things Considered, Channel News Asia, and Telesur, and her writing has been published by The Atlantic, La Opinión, and The Hill Rag. She was elected in 2016 as an at-large board member of the DC Chapter of the Society of Professional Journalists. Alice grew up in Santa Monica, California and began working for local newspapers in her early teens.
Have a tip? Send it Here!
includes:
Obamacare
Dear Reader,
BECOME A MEMBER
BECOME A MEMBER