Latest
20 mins ago ago
Morning Memo: Big New Reveal On Trump’s Conspiracy To Subvert The Election 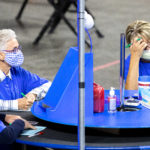 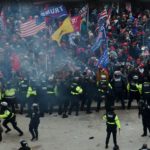 In a barrage of tweets over the past 12 hours, President Trump alternately praised House Republicans for caving to his demand for border wall funding, warned their colleagues in the Senate that they better follow suit, and blamed the entire prospect of a shutdown on Democrats who have steadfastly opposed the wall project.

“The Democrats, whose votes we need in the Senate, will probably vote against Border Security and the Wall even though they know it is DESPERATELY NEEDED,” Trump tweeted Friday. “If the Dems vote no, there will be a shutdown that will last for a very long time. People don’t want Open Borders and Crime!”

A subsequent tweet put his threat more succinctly: “Shutdown today if Democrats do not vote for Border Security!”

Just last week, Trump said he would be “proud” to shut down the Republican-controlled government to get his wall money.

This last-minute crisis of Trump’s own making got underway Thursday afternoon. The President caved to right-wing criticism and insisted that he would not sign off on a government funding bill that did not include $5 billion he requested to construct a wall on the U.S.-Mexico border. House Republicans caved in turn, flying back to Washington, D.C. on the cusp of the Christmas holidays to sign off on a new package.

As Trump crowed in his tweets, the new bill passed largely along party lines, 217 to 185. It now goes to the Senate, where Republicans need some Democratic votes to pass the 60-vote threshold. Funding for the federal government expires at midnight.

“No matter what happens today in the Senate, Republican House Members should be very proud of themselves,” Trump tweeted. “They flew back to Washington from all parts of the World in order to vote for Border Security and the Wall. Not one Democrat voted yes, and we won big. I am very proud of you!”

Trump encouraged Senate Majority Leader Mitch McConnell (R) to change the Senate rules so that only a simple majority will advance the legislation to a final vote.

“Mitch, use the Nuclear Option and get it done!” Trump tweeted. “Our Country is counting on you!”

The President also devoted a few tweets to his admiration for the concept of walls themselves.

“The Democrats are trying to belittle the concept of a Wall, calling it old fashioned,” he wrote. “The fact is there is nothing else’s that will work, and that has been true for thousands of years. It’s like the wheel, there is nothing better. I know tech better than anyone, & technology….”

The Democrats are trying to belittle the concept of a Wall, calling it old fashioned. The fact is there is nothing else’s that will work, and that has been true for thousands of years. It’s like the wheel, there is nothing better. I know tech better than anyone, & technology…..

…..on a Border is only effective in conjunction with a Wall. Properly designed and built Walls work, and the Democrats are lying when they say they don’t. In Israel the Wall is 99.9% successful. Will not be any different on our Southern Border! Hundreds of $Billions saved!

Newsletters
Your subscription could not be saved. Please try again.
Your subscription has been successful.
Allegra Kirkland (@allegrakirkland)  Allegra Kirkland is a New York-based reporter for Talking Points Memo. She previously worked on The Nation’s web team and as the associate managing editor for AlterNet. Follow her on Twitter @allegrakirkland.
Have a tip? Send it Here!
Latest Dc
Comments are now Members-Only