Trump Set Out To Kill Obamacare. So Why Is Enrollment Up?

President Trump has repeatedly declared the Affordable Care Act “dead” and his administration has done nearly everything possible to make it so. Yet the first enrollment numbers released Thursday by the Department of Human Services show the program very much alive.

According to HHS, more than 600,000 people signed up for a health care plan in the first four days of open enrollment, beginning on Nov. 1. Last year, under an administration pulling out all the stops to promote enrollment, just over 415,000 signed up in the first five days. Importantly, nearly a quarter of this year’s signups are from new enrollees who did not previously have a health care plan on Obamacare’s individual market.

For experts who predicted signups would crater this year thanks to the Trump administration gutting the budget for outreach and enrollment assistance, the rosy early numbers are a surprise, but they cautioned that anything could happen by the Dec. 15 deadline.

“It’s not necessarily an indication of everything to come,” warned Andy Slavitt, the former administrator of the Centers for Medicare and Medicaid Services, who oversaw open enrollment under the Obama administration. “It’s too early to conclude what open enrollment is going to look like.”

Health care analyst Charles Gaba, who tracks enrollment on his website ACA Signups, agreed, saying that we might merely be seeing a reversal of the trend from previous years where people wait until the deadline to sign up. “It doesn’t tell you anything about the final number,” he said. “It might just be more front-loaded than back-loaded this year.”

“Think of it like early voting,” he added. “In last year’s election, the early vote seemed to be heavily skewing toward Hillary, especially in Florida. And all the pundits were predicting she would win, but then Election Day came and it skewed heavily the other way. So it’s not the best predictor.”

According to the numbers HHS released Thursday morning, more than 137,000 new enrollees have signed up for an Obamacare plan, a higher percentage than Slavitt and others predicted. More than 2.5 million people visited Healthcare.gov, and more than half a million people called in for help enrolling in a plan. 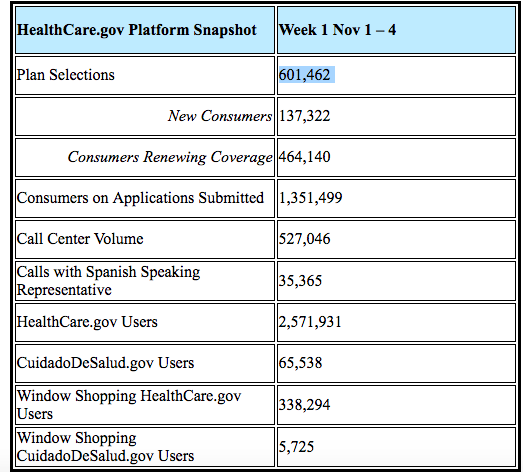 States that run their own health insurance exchanges are also reporting a significant uptick. California’s exchange said this week that signups have increased 25 percent compared to last year, while Maryland saw a whopping 70 percent increase on opening day. Many insurance companies themselves have confirmed the jump in enrollees, including new enrollees.

One, Trump cut the length enrollment period in half, so more people will have to sign up per day to even match earlier years.

Two, the Trump administration’s move terminating billions in cost-sharing reduction payments to insurers has had the opposite effect many predicted—while premiums have jumped for many unsubsidized Americans, many more have been able to find better plans for even less than they paid in past years and in many cases for free.

“The ACA is doing its job, keeping premiums low or at zero for millions of people,” Slavitt said. “So I’m not surprised that people want to lock it in early.”

Three, Republicans’ attacks on Obamacare have spurred a grassroots movement across the country to promote and defend it. Pro-ACA voters have mobbed congressional town halls, marched, protested, launched signup campaigns, and recruited comedians, celebrities and former presidents to encourage people to enroll.

“I’m still expecting a drop-off, but we might well see an all-time record—a backlash that could more than cancel out all the sabotage stuff,” Gaba said. “They say there’s no such thing as bad publicity, and though we’ve been assuming that the more Trump says ‘It’s dead, it’s dead, it’s dead’ that people think it’s been repealed, but maybe every time he flaps his gums people are reminded that Obamacare still exists.”