After firing off a tweet congratulating Moore in his victory in the race, Trump deleted several tweets he sent earlier in the day urging Alabama voters to re-elect Strange to the Senate seat vacated by Attorney General Jeff Sessions. The deleted tweets were captured by Politwoops, a tool that collects politicians’ deleted tweets currently run by ProPublica. 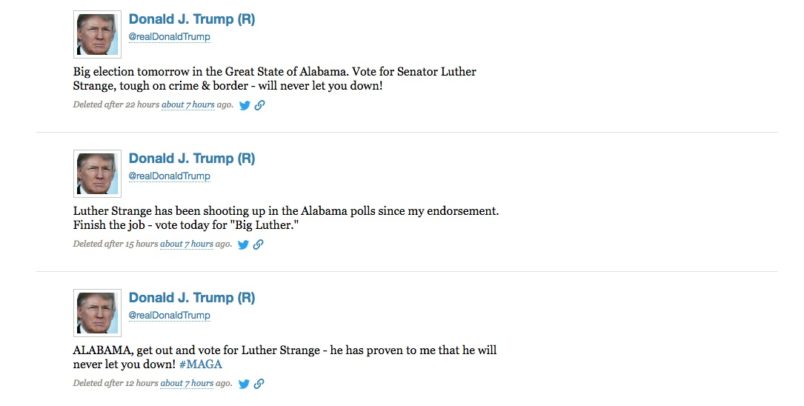 Trump backed Strange, Senate Majority Leader Mitch McConnell’s (R-KY) choice to hold the Senate seat, early on in the race, but several prominent Trump supporters, like Steve Bannon and Sebastian Gorka, campaigned for Moore, an ultra-conservative Republican who has been kicked off the Alabama supreme court twice.

After initially endorsing Strange, Trump appeared to hesitate and wavered on plans to hold a rally for Strange in Alabama after polls showed Moore in the lead. However, the President relented, holding a rally for Strange and sending out several since-deleted tweets urging Alabama voters to back Strange.