4 hours ago ago
Unvaccinated Palin Gets COVID, Derailing Her NYT Defamation Suit Trial 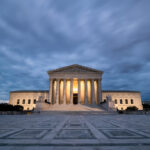 Rep. Pat Meehan (R-PA) will retire at the end of his term, he told GOP leaders Thursday, days after it became public that a senior staffer had accused him of sexual misconduct and he’d settled using taxpayer dollars.

Meehan’s decision comes after he sought to defend his relationship with a former aide, arguing it had never been sexual in nature while at the same time admitting that he’d acted inappropriately toward her.

The congressman until recently sat on the powerful House Ethics Committee that oversaw investigations of scandals, including sexual harassment claims, and his burgeoning scandal threatened to further damage the national image of a party that’s already struggling badly with female voters in recent polls and elections.

His decision to retire opens up a swing House seat in suburban Philadelphia. Democrats would likely be favored to win this seat in what’s shaping up to be a good year, and a recent state Supreme Court ruling that the GOP-drawn congressional map is an illegal partisan gerrymander may make the district even more Democratic, giving the party a prime pickup opportunity.

Republicans walked a fine line in acknowledging Meehan’s decision to leave, declining to criticize him directly while promising to hold his seat.

“While I’m disappointed by the circumstances leading to Congressman Meehan’s retirement, I thank him for his dedication to his district. We must always hold ourselves to the highest possible standard – especially while serving in Congress,” National Republican Congressional Committee Chairman Steve Stivers (R-OH) said in a Thursday night statement. “I am confident that the voters of Pennsylvania’s 7th District will elect a strong conservative who will represent their values.”
Cameron Joseph Cameron Joseph is Talking Points Memo's senior political correspondent based in Washington, D.C. He covers Capitol Hill, the White House and the permanent campaign. Previous publications include the New York Daily News, Mashable, The Hill and National Journal. He grew up near Chicago and is an irrationally passionate Cubs fan.
Have a tip? Send it Here!
Latest Dc
Comments
Masthead Masthead
Founder & Editor-in-Chief:
Executive Editor:
Managing Editor:
Associate Editor:
Investigations Desk:
Reporters:
Newswriters:
Director of Audience:
Editor at Large:
General Counsel:
Publisher:
Head of Product:
Director of Technology:
Associate Publisher:
Front End Developer:
Senior Designer: