1 hour ago
Pence Urges GOPers To Aim Their Ire At Garland, Stop Attacking FBI In Wake Of Raid

11 hours ago
Palin Advances To General Election For House Seat

As the Trump administration encourages states to impose work requirements on their Medicaid programs, now in place in four states and counting, two conflicting messages have emerged.

The administration’s top health care officials, as well as many Republican governors and lawmakers, have argued that people living in counties with high unemployment rates should be exempted from the work requirement — a seemingly neutral standard that in practice favors rural white residents and places a heavier burden on urban-dwelling residents of color.

At the same time, the administration insists that the policy is not a work requirement, but rather an incentive to be active in their community in some fashion.

“Community engagement isn’t necessarily just about work,” Trump’s Medicaid chief, CMS Administrator Seema Verma, told a packed room at the Washington Post on Tuesday morning. “It could be volunteer work, it could be job search activities, it could be job training — anything to help that individual seek independence and a pathway out of poverty.”

“If it’s truly about ‘community engagement’ and not a work requirement, why exempt anyone?” she asked TPM. “If what you care about is getting people to participate in their communities, it doesn’t matter what the unemployment rate is. You can ‘engage’ in any community.”

CMS did not respond to TPM’s questions about the exemptions by deadline.

Four states — Kentucky, Indiana, Arkansas and New Hampshire – have already received the Trump administration’s blessing to impose the new requirements on their Medicaid programs, which is expected to result in a loss of coverage for hundreds of thousands of people who are unable to comply. Several more states have applications awaiting federal approval. As lawsuits pending in federal court challenge the work requirements in their entirety, arguing they do not serve Medicaid’s goal of providing health care to low-income Americans, some state proposals that peg exemptions to the county unemployment rate may have an illegal disparate impact on communities of color.

In Kentucky, Ohio, and Michigan, people living in the counties with the highest unemployment rate would not lose their Medicaid coverage if they are unable to find a job. Those counties are overwhelmingly white, GOP-leaning and rural. Meanwhile, many low-income people of color who live in high-unemployment urban centers would not qualify because the wealthier suburbs surrounding those cities pull the overall county unemployment rate below the threshold.

New Hampshire, which has not yet announced which counties are exempt, could run into a similar problem. In its recently-approved waiver, the state promised to “assess areas within the state that experience high rates of unemployment, areas with limited economies and/or educational opportunities, and areas with lack of public transportation” so that the work requirements “will not be unreasonably burdensome for beneficiaries to meet.”

In Michigan, the disparities are particularly stark. If the waiver were approved, black residents would make up just 1.2 percent of the people eligible for an exemption, though they are 23 percent of the state’s Medicaid population. White people, who are  would make up 57 percent of Medicaid enrollees, would constitute 85 percent of those exempt from the work requirement.

In her remarks on Tuesday, Verma said the administration realizes that some people deserve an exemption from the work requirements, listing people with disabilities, those who are “medically frail” or addicted to drugs, full-time caregivers and pregnant mothers. Verma also voiced support for a protection for people “living in areas where there may not be jobs available. There may be problems with the economy in that particular area.”

Though these exemptions are responding to the reality that many people living in poverty are unable to find a job, even when required to do so, health care experts and advocates say the exemptions also undermine the entire rationale of the new Medicaid rules.

“There are a lot of pretty contradictory things here,” former Health and Human Services senior counselor Aviva Aron-Dine told TPM. “They’re saying there are real barriers to finding work that shouldn’t cause someone to lose their health care. But the exemptions are not a real solution. For one, they’re too narrow, and would miss millions of people living in cities with equally high unemployment rates. They also aren’t taking into account the unemployment rate for low-skilled workers in particular. It’s not like someone with a high school degree can go out and get an engineering job.”

Aron-Dine, now the vice president of health policy at the Center on Budget and Policy Priorities, also noted that years of data on work requirements in other federal safety net programs, including food stamps and cash assistance, show that many people who technically should qualify for an exemption are unable to do so because they can’t navigate the bureaucracy and produce proper documentation.

In a new paper, Aron-Dine and her colleagues argue that even the majority of people on Medicaid who are currently employed are at risk of losing their health care due to the prevalence of unpredictable schedules in low-wage jobs. Their study found that even those who worked an average of 80 hours per month over the course of a year would be at risk under a system like Kentucky’s if they couldn’t get enough shifts in a particular month. 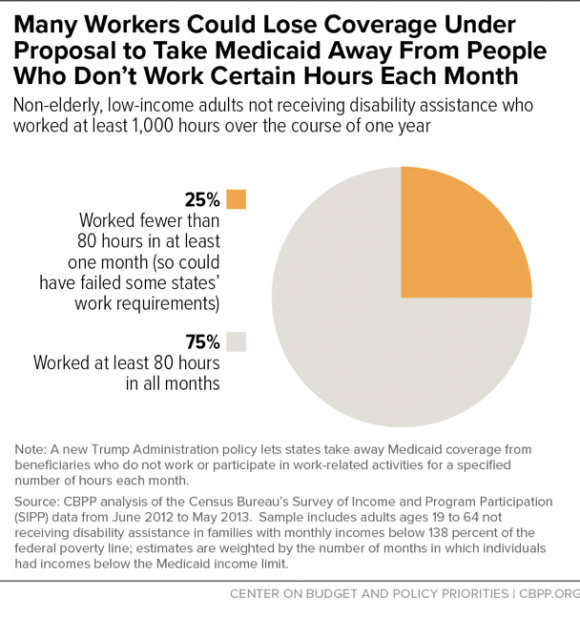 Both geographical and individual exemptions to the Medicaid work requirements have myriad ways for people to fall through the cracks — a person with a health condition that isn’t a federally-recognized disability, a fast food worker whose hours vary from month to month, an individual with a family in Detroit who cannot find a job but whose county unemployment rate is not low enough to qualify for a pass. Even the term “able-bodied” — which HHS and states have used to describe the people on Medicaid who should be required to work — has a fraught, classist, gendered history.

University of Michigan Law School professor Nicholas Bagley has argued that Michigan’s Republican lawmakers who are working “to protect their constituents” with the targeted geographic exemptions are undermining their own rhetoric concerning Medicaid.

“If work requirements were a good idea, conservative Michigan legislators wouldn’t need to exempt their rural constituents,” he writes. “They’d just offer a tough-love message: If you want health insurance on the public dime, you should move to a place where you can find work.”

This contradiction is alive on the federal level as well. Even as she voiced support on Tuesday for geographic, unemployment-based exemptions, Verma told a crowd of health care lobbyists and reporters that the work requirements were a good policy for everyone.

“The goal should be not only providing health care coverage, but providing them with a pathway out of poverty,” she said. “It’s much easier to hand them a card and say, ‘Good luck. Go get your health care.’ It’s much harder thing and a higher goal to actually help these individuals live independent lives.”