19 hours ago
Trump: I Have Been Raided By The Feds

20 hours ago
After All That, The Senate Bill Will Actually Be A Massive Leap Forward On Biden’s Climate Goals

A new study offers an estimate on the number of people who would be most vulnerable to premium hikes or losing coverage altogether due to the House GOP Obamacare repeal bill’s rollback of the Affordable Care Act’s protections for those with pre-existing conditions.

An analysis by the Kaiser Family Foundation found that more than six million people would have both the type of conditions and the lapse in coverage that would allow insurers to charge them more, under a state waiver option offered in the legislation, the American Health Care Act.

The Kaiser study, released Wednesday, looked at the number of people who had gaps in coverage according to most recent National Health Interview Survey, and further broke them down by the survey’s estimate of people with pre-existing conditions that could have prompted a denial of insurance coverage in the pre-Affordable Care Act days.

The analysis found that 6.3 million people met these conditions, making them vulnerable to a provision in the House GOP’s American Health Care Act that allows states to opt out of Obamacare insurer mandates prohibiting insurers from jacking up premiums based on one’s health status. Under the waiver option, known as the MacArthur amendment, insurers in opt-out states would be able charge those with pre-existing conditions more than the the standard premium rate if the consumers had a lapse in coverage longer than 63 days.

“In many cases, people uninsured for several months or more in a year have been without coverage for a long period of time. In other cases, people lose insurance and experience a gap as a result of loss of a job with health benefits or a decrease in income that makes coverage less affordable,” the analysis said. “Young people may have a gap in coverage as they turn 26 and are unable to stay on their parents’ insurance policies. Medicaid beneficiaries can also have a gap if their incomes rise and they are no longer eligible for the program.” 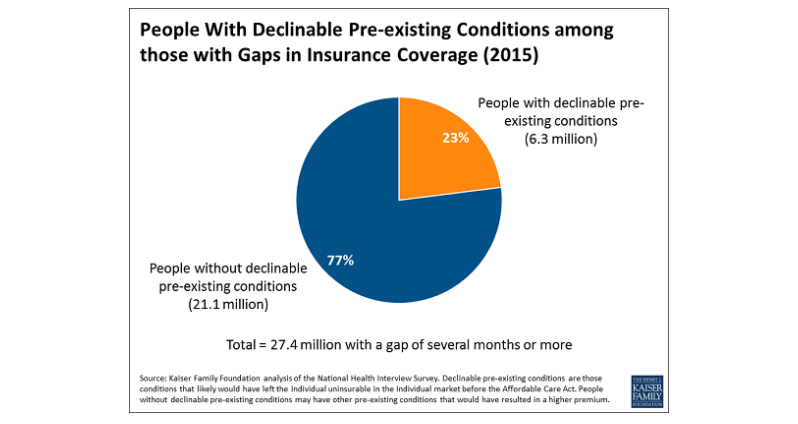 The analysis said that even more than the 6.3 million cited have other types of conditions, such as asthma depression or hypertension, that could lead to a rise in premiums under AHCA, even though they were not declinable in the pre-ACA days.

Republicans have come under fire for the bill’s rollback of the ACA’s protections for pre-existing conditions. Technically, under the GOP bill, Obamacare’s “guaranteed issue” provision — meaning its ban on insurers denying coverage based on pre-existing conditions — would stay on the books. But by allowing states to opt out of the ACA’s so-called community ratings based on health status the GOP bill would essentially allow insurers to price sick people out of the market.

The bill narrowly passed the House after an additional $8 billion was added to the $130 billion or so already in the bill to help finance state high-risk pools and other programs Republicans say could be set up to protect people with pre-existing conditions. That amount is far below what experts have estimated an appropriate risk pool to cost and the legislation is vague in its directive for states to do so if they seek to waive out of the ACA’s consumer protections.

The Senate is currently working on its own Obamacare repeal bill.

The Kaiser study pointed to a number of unknowns that could affect how many people would actually experience premium hikes due to pre-existing conditions and coverage lapses. Obviously it would depend greatly on how many states ultimately took the waiver.

Kaiser also pointed out that the number of people who would have a lapse in coverage could be higher than the 2015 survey on which its estimates are based. For one, the tax credits under the GOP bill are less generous for certain groups of people — particularly lower-income and older consumers — than the current Obamacare subsidies, meaning more people could have a harder time affording continuous coverage. The GOP bill also imposes major cuts to Medicaid, and those who would no longer be eligible for the Medicaid expansion that is phased out in the Republican legislation could be susceptible to lapses in coverage.