12 hours ago ago
Toomey Swipes At Dems As Jan. 6 Committee Gears Up For First Hearing

A report released Thursday by the Kaiser Family Foundation shows a sharp disparity in how the new Graham-Cassidy Obamacare repeal bill treats states that expanded Medicaid and those that did not.

Overall, the report estimates, states would see $160 billion less in federal health care funding over the next decade under the proposed law, with 35 states and D.C. losing federal dollars. But Medicaid expansion states would bear the heaviest burden by far, losing 11 percent of federal support on average. Republican-controlled states that did not expand Medicaid, however, would get an average increase of 12 percent.

The biggest losers under the bill would be high population, progressive states. California, New York, and Pennsylvania would lose $56 billion, $52 billion and $11 billion dollars respectively.

The biggest winners would be the deep red South: Texas would see $34 billion more, and Georgia, Tennessee, and Mississippi would see $10 billion, $7 billion, and $6 billion bumps respectively over the first decade. 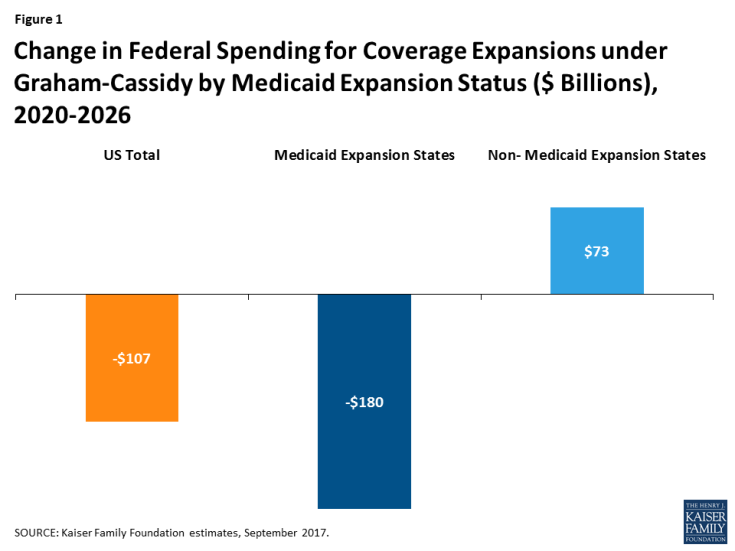 The Kaiser report cautions that all states would face a “cliff” under the bill in 2027, when hundreds of billions of federal dollars could disappear overnight if Congress didn’t renew the block grant funding.

The report comes on the heels of studies by Avalere, Manatt, Brookings, the Center for American Progress and the Commonwealth Fund that have all found that the Graham-Cassidy repeal bill would mean painful cutbacks in federal support for both Medicaid and subsidies for people on the individual market.

Alice Ollstein (@AliceOllstein)  was a reporter at Talking Points Memo, covering national politics. She graduated from Oberlin College in 2010 and has been reporting in DC ever since, covering the Supreme Court, Congress and national elections for TV, radio, print, and online outlets. Her work has aired on Free Speech Radio News, All Things Considered, Channel News Asia, and Telesur, and her writing has been published by The Atlantic, La Opinión, and The Hill Rag. She was elected in 2016 as an at-large board member of the DC Chapter of the Society of Professional Journalists. Alice grew up in Santa Monica, California and began working for local newspapers in her early teens.
Have a tip? Send it Here!
Latest Dc
Comments are now Members-Only