A Congressional Budget Office analysis released Thursday found that if the draft Senate Obamacare repeal bill became law, federal spending on Medicaid would be a third lower in 20 years.

“In the Congressional Budget Office’s assessment, Medicaid spending under the Better Care Reconciliation Act of 2017 would be 26 percent lower in 2026 than it would be under the agency’s extended baseline, and the gap would widen to about 35 percent in 2036,” the CBO said.

The growing size of the cuts is a result of the overhaul of the traditional Medicaid program Republicans seek to implement with the bill, in addition to its phase out of Medicaid expansion under the Affordable Care Act.

Under the proposed system, known as a per capita cap, there would be a limit on the amount of funding the federal government would contribute to states’ Medicaid programs on per enrollee basis. 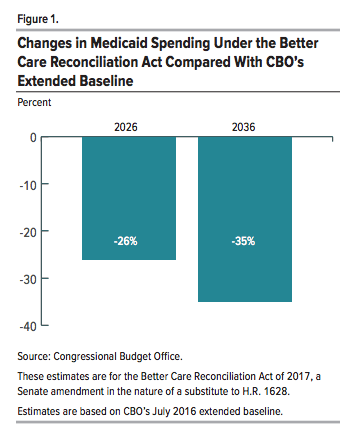 Currently, the federal government participates in a state match rate, where the feds’ contribution rises and falls alongside the overall costs of the Medicaid program.

Where the rubber really hits the road under the GOP proposal is how slowly the limits grow over time. The House Obamacare repeal bill used the inflation rate, consumer price index for medical care, which grows more slowly than typical Medicaid funding. The Senate legislation introduced an even more draconian growth rate, consumer price index for urban consumers, starting in 2025, two years before the 10-year window the CBO typically scores runs out.

The top Dems on the Senate’s Budget and Finance Committees requested that CBO score the cuts for the decade after that.

“This analysis makes clear that the massive cuts to Medicaid are only going to get worse,” Finance Chair Ron Wyden (D-OR) said in a statement after the CBO report’s release.

Newsletters
Your subscription could not be saved. Please try again.
Your subscription has been successful.
Tierney Sneed (@Tierney_Megan)  is a D.C.-based investigative reporter. She focuses on voting rights and previously covered health care for TPM.
Have a tip? Send it Here!
Latest Dc
Comments are now Members-Only