3 mins ago ago
Jan. 6 Committee Chair Reveals Bill Barr Has Spoken With Investigators

2 hours ago ago
Coons: ‘Frustrations’ Among Dems After Sinemanchin Joined GOP’s Opposition To Filibuster Carveout

4 hours ago ago
Sanders: Arizona Dems’ Censure Of Sinema For Torpedoing Voting Bills Was ‘Absolutely’ Appropriate

The Department of Health and Human Services announced Thursday that despite the Trump administration’s many attempts to undermine and weaken the Affordable Care Act, enrollment in the federal health care marketplace nearly reached last year’s total of 9.2 million, clocking in at 8.8 million.

Considering that the Trump administration cut the length of the open enrollment period in half, severed partnerships with hundreds of grassroots health organizations, slashed 90 percent of the federal outreach and advertising budget, and has consistently declared the law “dead” and “essentially repealed,” the robust enrollment total is astonishing. Even the most optimistic estimates from health care experts and advocates expected enrollment to drop off by a few million due to the Trump administration’s cutbacks.

As of the final week of open enrollment, which the Trump administration cut from 12 to six weeks, signups were still lagging far behind last year’s total. The massive jump in enrollment in the signup period’s final days was a combination of the typical surge of procrastinators just before the deadline and a large number of people who were auto-enrolled in their current plan because they did not actively select a new one.

CMS reported that the total does not include the people who enrolled between midnight and 3 a.m. on the final day, nor those who were stuck trying to enroll when the deadline hit, and who were called back by HHS and later enrolled.

The health consulting firm Avalere, which has been tracking the lag in signups that characterized the enrollment period thus far, updated its chart to show the massive number of signups and auto-enrollments that happened this past week. 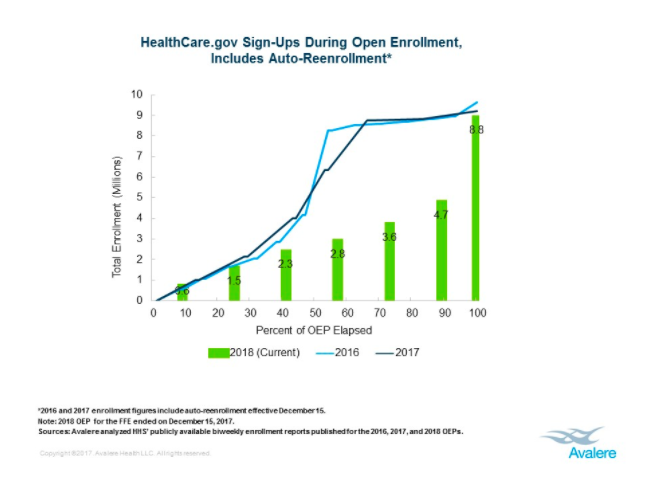 Advocacy groups like Get America Covered heavily invested in outreach during the final week of enrollment, using digital ads targeted at the young consumers the health care marketplace desperately needs to keep prices down. The group estimates that their ads drove hundreds of thousands of people to Healthcare.gov, though how many actually enrolled is unknown. Several insurance companies also stepped up their advertising in the wake of the federal government’s decision to all but abandon outreach.

The CEO and co-founder of the insurer Oscar Health announced Thursday that after a “comprehensive marketing campaign,” they have broken their all-time record for signups. “Enrollments surged at the start and never stopped,” Mario Schlosser said in a statement. “Oscar will enroll over 250,000 members, well over double our total from last year.”

The federal total does not include the dozen states that run their own health care marketplaces, many of which have invested heavily in outreach and are seeing record enrollment, including populous states like California. Those numbers will come in later, and the ultimate total may be several million higher than the total announced Thursday.

Ironically, one of the moves by the Trump administration designed to weaken the Affordable Care Act may have backfired—the termination of billions of dollars of cost-sharing reduction (CSR) payments to insurers reimbursing them for covering low-income patients with severe health needs. Millions of people actually had access to better and cheaper plans this year due to how state insurance officials adjusted their programs in response to Trump defunding CSRs.

“They say there’s no such thing as bad publicity,” health care analyst Charles Gaba, who tracks enrollment on his website ACA Signups, told TPM. “Though we’ve been assuming that the more Trump says ‘It’s dead, it’s dead, it’s dead’ that people think it’s been repealed, but maybe every time he flaps his gums people are reminded that Obamacare still exists.”

Yet danger still lurks on the horizon for the federal health care marketplace. Congress passed a tax bill this week that kills the Obamacare’s individual mandate penalty, a key mechanism for pushing young and healthy people to buy health insurance. The mandate’s repeal doesn’t kick in until 2019, but amid documented mass confusion about the status of the law, there is a chance many people will think they do not need health insurance in 2018, and will decline to pay their first premiums. Even in a normal year, there is an attrition rate of about 10 percent, but that drop-off may be much larger in the months to come.

Alice Ollstein (@AliceOllstein)  was a reporter at Talking Points Memo, covering national politics. She graduated from Oberlin College in 2010 and has been reporting in DC ever since, covering the Supreme Court, Congress and national elections for TV, radio, print, and online outlets. Her work has aired on Free Speech Radio News, All Things Considered, Channel News Asia, and Telesur, and her writing has been published by The Atlantic, La Opinión, and The Hill Rag. She was elected in 2016 as an at-large board member of the DC Chapter of the Society of Professional Journalists. Alice grew up in Santa Monica, California and began working for local newspapers in her early teens.
Have a tip? Send it Here!
Latest Dc
Comments
Masthead Masthead
Founder & Editor-in-Chief:
Executive Editor:
Managing Editor:
Associate Editor:
Investigations Desk:
Reporters:
Newswriters:
Director of Audience:
Editor at Large:
General Counsel:
Publisher:
Head of Product:
Director of Technology:
Associate Publisher:
Front End Developer:
Senior Designer: